Bikers Lend Help To Woman Whose House Was Destroyed by Fire

The smell of damp charred wood filled the air foreshadowing the remains of the broken down building that were hidden from view behind a full dumpster. Two women who had been removing the debris and salvaging the remains for weeks now had helping hands, as 10 bikers came to pitch in. Vickki Owens’s house burned on February 8, after she left a ceramic heater on to keep two rescued kittens warm. Since then she has been salvaging what she could and discarding the remains. Her neighbor Brooke Clement, pitched in when she saw Owens was working alone, and early in March she called a friend, and today, Saturday, March 21, a group of bikers showed up to help her out.

“I looked at them two, and they looked like they were about to fall out,” said Roy Horrigan. “And I said, ‘we have to do something.” 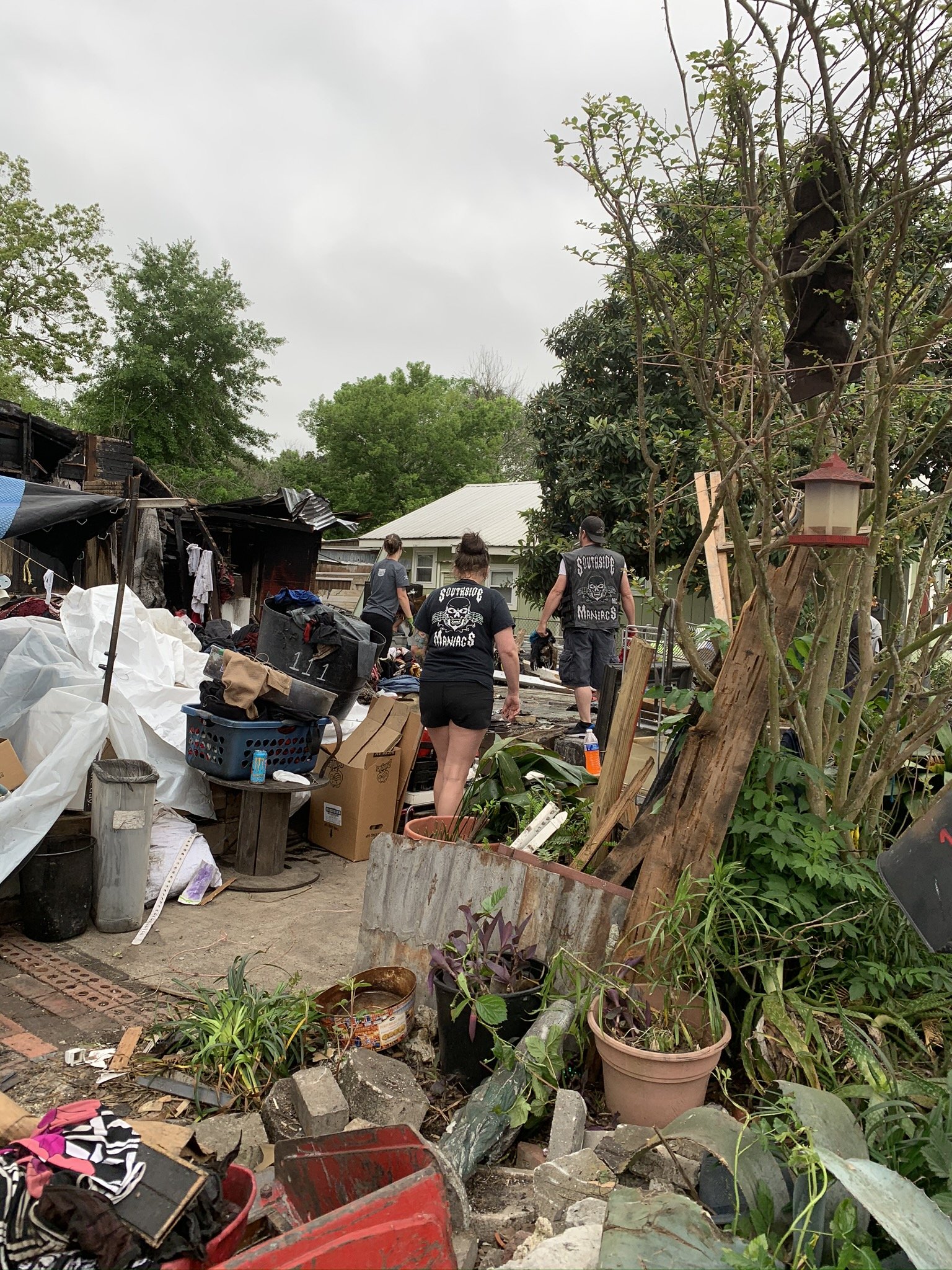 Horrigan is the founder of Southside Maniacs, a 501c3 nonprofit group of bikers who donate time to charities. The group gathered with a bobcat, an excavator, and a track steir to clear the wreckage. Horrigan said their goal was to knock it all down today, making it safe, and have it cleared out in a few days.

Owens said she was grateful for their help. She had been having difficulty with items she salvaged disappearing during the night, and said she thought looters were taking her tools, “you know it’s kind of hard to work without tools,” she said.

“Starting from that Saturday night, people were rummaging through my stuff,” Owens said. “You know you already feel exposed because everything you have is no longer behind walls.” 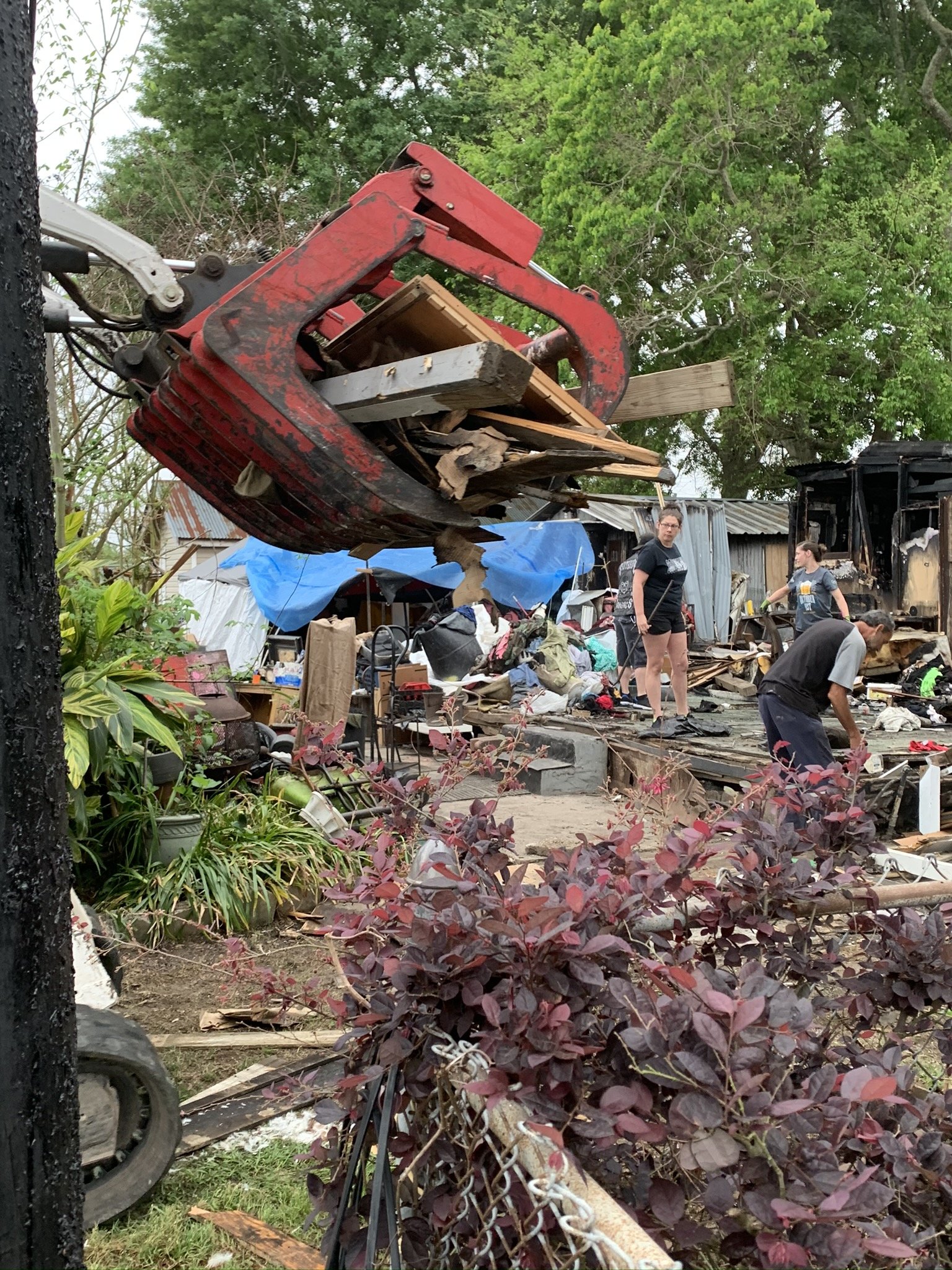 Her neighbor, Clement, saw her working alone and began to help her clear the debris. Even as Clement spoke, she was carrying a hanging mirror the size of herself. Asked why she began to help, Clement responded, “If I was in this situation, I would want someone to help me out.”

After the fire had been put out, Owens said, the Parish pushed the front two rooms which had not burned into the back two rooms. This, she said, made it difficult to salvage what hadn’t been destroyed, “the part that wasn’t burned was pushed into the part that was burned, and then they smashed the roof on top of that and basically said, ‘clean it up you’ve got 30 days.”

The government informed her that she had 30 days to clear the site or by law they’d have to clear it and fine her, if they saw her having made progress they could give her an extension. A dumpster was provided to her by the Parish to help clean up the mess, which she said she filled twice. Each time she packed it as tightly as she could, because she was only being provided the dumpster three times, “and they said they saw no progress,” she said, over a beeping excavator.

The house was built in 1847, moved to the neighborhood from a plantation where it became a duplex. Owens and her father worked on the building during which time he became ill and died, “you know, this house was the last house me and my dad worked on,” she said, holding back emotions. The building was being used to store antiques, before it burned down. Owens said she was planning to open a shop to sell the items she had collected. She was not living in it at the time of the fire.

One of the men helping to clear the debris, David Sheppard, said he was clearing trees nearby the day before the fire happened. The group were discussing how it was good to see the community coming together, “sometimes you gotta ask,” said Sheppard. They hoped their efforts would give Owens more time. Coast Guard searching for Persons in Water near Grand Isle