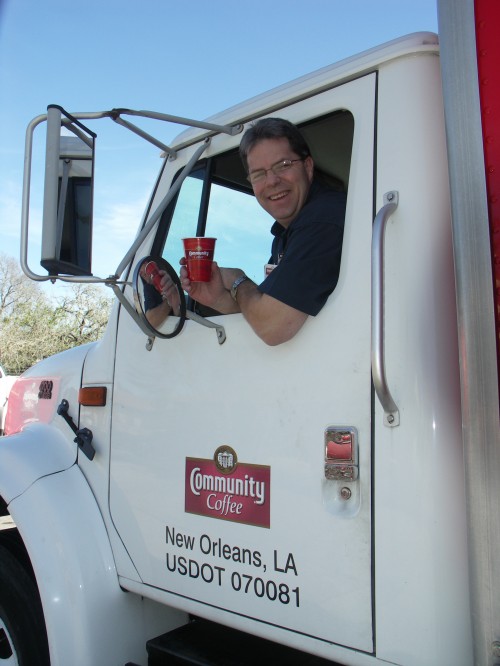 Four decades ago Baton Rouge-based Community Coffee Co., was building a new distribution center in Houma. As a boy, Todd Allen and his friends would explore the worksite once crews had left for the day. Imaginations of the youths could only speculate as to what was being built on property next to their residential neighborhood.

“We thought they were putting in a swimming pool,” Allen said recalling the excavation for a foundation and loading dock ramp. “We didn’t know what would be here.”

Allen also had no idea that one day he would be sales manager of the distribution center on West Park Avenue, separated by a fence from the old neighborhood, but connected to the community-at-large by one of the best known product names in Louisiana.

A fourth generation family-owned business, Community Coffee got its start when Henry Norman “Cap” Saurage was experimenting with coffee blends to offer customers in his general store. He found what was perfect to his taste and named it Community because of his close connection with people of the north Baton Rouge area.

The company is reluctant to talk numbers, even keeping quiet about how many pounds of product they sell each day, but 93 years after Saurage poured his first cup of the aromatic elixir, that has become a staple for many Bayou State coffee drinkers, the company extended its reach over the years from Texas to Florida.

As a Direct Store Delivery facility, the Houma distribution center begins with placing its order for coffees from its roasting plant in Port Allen. Coffee is delivered by 18-wheeler to the warehouse along with tea and sideline products that include cups, stir sticks, and even sugar and creamer packaged with the company logo from various suppliers.

Monday through Friday, drivers in familiar red step vans and bobtail delivery trucks arrive as early as 5 a.m. to load for their daily routes then hit the road, delivering to grocery stores, coffee houses, restaurants, hospitals, business offices and other contract locations in a five-parish territory.

“We get a relay [plant delivery] once a week, but depending on volume it can push over to two trucks a week,” Allen said. “That’s just our main products.”

Although this center operates with a process that keeps product rotated and available for delivery, Allen said he is not sure there is a typical day. “Anything can happen. This morning, the lift gate hydraulics on a truck went out. The guy that was going to do catch-up work with it couldn’t do what he was scheduled to do today, so we sent him off with another salesman to help him catch up.”

As distribution center manager, Allen said this truck trouble that day is one example why it is important to be open and flexible to everything from mechanics to weather to delays in product delivery issues, while motivating warehouse workers and drivers under him to perform at their highest levels of productivity. “So many variables can happen,” he said. “You have to have a turtle back and let problems roll off. It you don’t then the job will just eat you up.”

After working with Winn Dixie for 10 years, Allen delivered spring water for two years. While doing water route sales he was offered an opportunity to move over to Community Coffee, where he found a home 20 years ago.

First working in route sales, he has been a manager for the past six years. He said being part of DSD prepared him to lead others in a manner that nothing else could.

“You know the real world that way,” he said. “Even when you get in this position, I could get a call in the morning to go on a route because a driver is sick. There are certain aspects of management and certain aspects of the route and they have to mesh, but as a manager if you don’t have a concept of what goes on you cannot help others.”

This coffee specialist said the success of this company, like any business, is to begin with a high quality product. “All we use is Arabica beans,” he said regarding varieties of Community Coffee blends. “Then you have to back it up. The thing that makes us successful is service.”

Community Coffee has also been known for innovation. It was the first coffee producer in the nation to make use of vacuum-sealed packaging.

The company offers a cash for schools program in which students can collect and turn in Universal Product Code labels from Community Coffee packages and earn 10 cents per label.

Allen noted that last year 74 schools participated in the Community Cash for Schools program, earning $1,000 or more per school with the most collected being $6,900.

Community Coffee also hosts a Military Match effort in which the company with match four bags of coffee for four bags purchased to be sent to overseas military personnel. “People notice projects like this,” the DSD manager said regarding the establishment of brand loyalty and being part of society.

Allen added that even growing companies can continue to operate with the attitude of a small business where individuals are treated as valuable members of the operation. “It is drilled in us every day,” he said. “Everyone has value and when you treat them like that … [they perform better.]”

According to coffee-statistics.com, Americans consume 400 million cups of coffee per day, and coffee shops are the fastest growing segment of the restaurant industry with an annual growth rate of 7 percent. Community Coffee does have coffee houses under the company banner in metropolitan New Orleans, but none in the Tri-parish region at this time.

As a coffee coinsurer, the guy that grew up next to where he would ultimately make his career credits his mother for developing an appreciation of good coffee in him at an early age. “We didn’t have a lot of luxuries,” he said. “So, she would always make fresh coffee. I guess I was destined to work with Community Coffee. I lived right over here and I’ve always loved coffee.”