From the Top | Stuart Faucheux 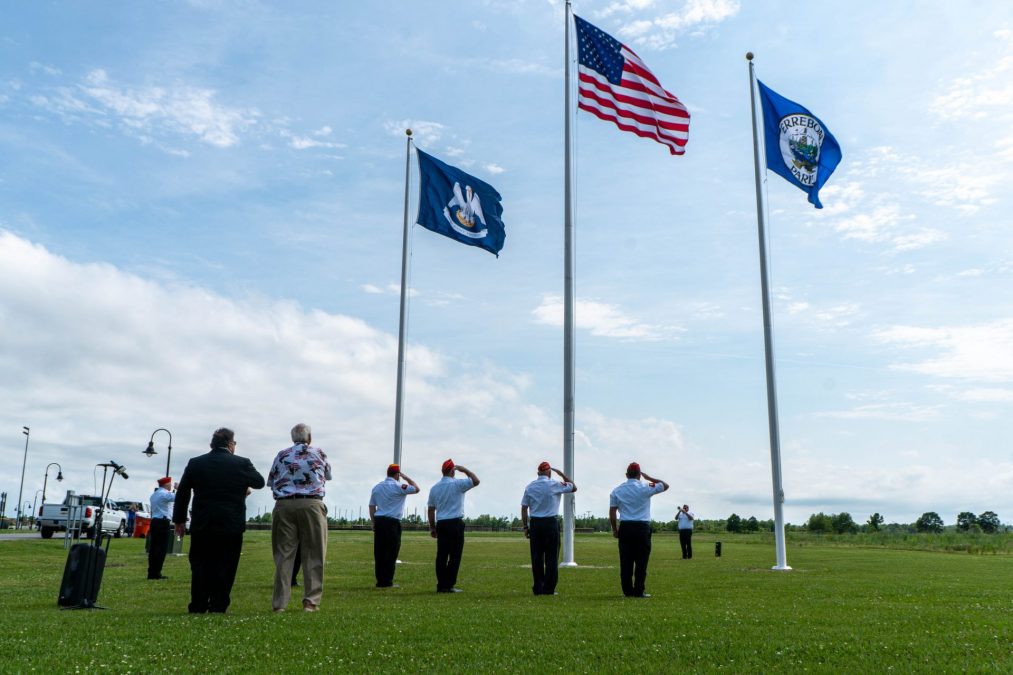 On May 11, Terrebonne Parish officials and community members commemorated recent progress at the Bayou Country Sports Park (BCSP), which sits off of La. Highway 311 near the Lakes subdivision in Houma.

The festivities kicked off with the raising of the country, state and parish flags by the Marine Corps League.

“How can we not have a sports park without honoring the American flag and also the Louisiana flag and the Terrebonne Parish flag,” said Parish President Gordon Dove. “That’s what all this is about — honoring the flag that is going to fly over this sports park on this great day.”

Terrebonne Parish Sheriff Tim Soignet, a Marine veteran, noted the importance of the flag being seen by folks as they enter the park.

“Our forefathers and everybody who served long before I did have laid the foundation so we can enjoy little freedoms. And every day when they [residents] roll into the park and they want to enjoy, there’s a reminder of the price that was paid for us to enjoy the freedoms.”

After the flags were raised, attendees traveled down Bayou Country Parkway to join the ribbon-cutting ceremony for the park’s splash pad on the other end of the complex.

Designed by architect Joey Furr, the 9,000-square-foot splash park features men’s and women’s restrooms and is accompanied by a family beach area. Houma’s Quality Industries donated the oilfield equipment incorporated into its design.

The construction cost for the area was $1.4 million, funded with $1.15 million of Recreation District 2-3 tax revenue and a $250,000 grant from the Land and Water Conservation Fund.

The splash pad was the last project for BCSP on the books for Rec 2-3 — as the parish took over the park’s maintenance, operations and construction last October.

According to Councilman Darrin Guidry, the project started three years ago when the old Rec 2-3 board applied for the grant for the splash pad. “The new reorganized board took the project over, ran with it, built this project, and towards the very end of it, the parish came in and added the last-minute touches with the beach and everything. And then here we are,” he said.

Guidry said the area’s completion was a group effort not only by the parish government and the Rec 2-3 board but also the voters — who passed the property tax that allows for such amenities to be constructed.

After the ceremony, officials turned on the splash pad’s water for local children to enjoy the free new play area.

“This is what we’ve been working for: to watch the kids run all over the place and have a blast,” said Shawn Dupre, Rec 2-3 board member. For Robbie Liner, board chairman, the moment felt like receiving a grade for a test. “You get your grade back, and you passed,” he said. “That’s how I feel. It’s an accomplishment.”

The Terrebonne Parish Council set the ball rolling on a potential merger of recreation districts in North Terrebonne.

During a committee on May 10, council members unanimously voted to draft an ordinance that would create a “super district” consisting of current Recreation Districts 1, 2/3, 8 and 9.

If that ordinance passes, officials would write a proposition to go to constituents of said districts for a millage rate of 6.5 mills. (One mill equals $1 for every $1,000 of assessed property value.) If the property tax passes, the new millage will replace those voters’ current ones.

The proposal has to be voted on by a majority of each of the four rec districts for it to pass, officials said. If it fails in at least one of the districts, the council would abolish the new super district, according to officials.

Recommended by the Terrebonne Parish Recreation Modernization Task Force, the proposed 6.5 mills would raise close to the amount of money the districts combined bring in now.  Rec 2/3 residents would see a tax increase as they currently have a 5-mill rate. Other areas of the super district would have a decrease in property taxes.

“The Board gave strong consideration to the fact that while all scenarios involved an increase in the recreation millage of the residents of Recreation District 2/3, this scenario provided the greatest decrease to the other residents of North Terrebonne while simultaneously generating the greatest benefit for the area as a whole,” the task force’s report reads.

It also states: “By merging the districts, these capital projects can be better planned and coordinated so that facilities complement each other as opposed to competing with each other. The resources and equipment of the districts (vehicles, machinery, etc.) could be combined in a manner that would increase efficiency, thereby benefitting the constituents of the district.”

Kandace Mauldin, Terrebonne Parish Consolidated Government CFO, said the council needed to vote on how to proceed — as the parish aims to have the proposition on the ballot in November, which has a July deadline for bringing it to the State Bond Commission.

If passed, parish financial advisors said it wouldn’t be until 2022 that the tax would be imposed and there wouldn’t be a double taxation period if all the proper steps are followed. Officials also said Rec 1’s proposed bond issuance, which was a concern of some council members and citizens, shouldn’t thwart the merger. •