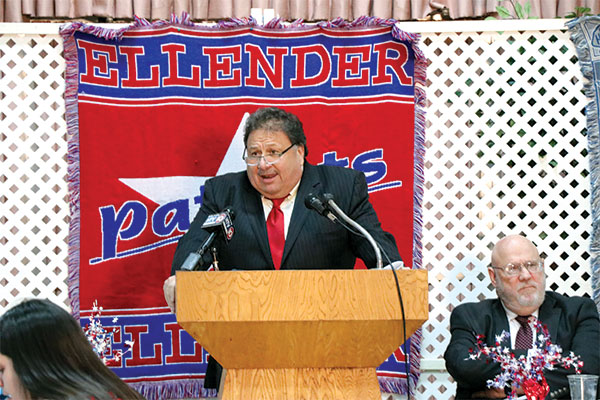 Barely into its second month, the year 2019 has marked some milestones for Terrebonne Parish, in particular when it comes to flood protection improvements.

Other signs of progress include what appears as a rejuvenation of the Houma-Terrebonne Civic Center, which has begun holding home-grown concerts and other events organized by its new director, Dean Schouest. A significant development as well is the start of new low-income housing on lots in east Houma that boosters see as a residential living renaissance for the neighborhood.

The jewel in Parish President Gordon Dove’s administrative crown, however, remains construction of new protection as well as levees and flood gates, an expansion of existing protection.

A key piece of the flood protection puzzle is the Falgout Canal floodgate, part of the combination of gates and levees that Terrebonne taxpayers opted to fund themselves, through a tax, rather than wait for federal funding that consistently failed to materialize over a period of decades.

“With a 180-foot opening, this is the last of seven floodgates on the southern sections of the Morganza Flood Protection System and ties Falgout Canal to Pointe-aux-Chenes,” Dove said. “The project cost is $35 million and is fully funded by Terrebonne Parish, State of Louisiana and the Terrebonne Levee & Conservation District. The system includes 35 miles of levees, as well as lifts of numerous miles of levees in Terrebonne.”

Dove said thanks are due first to the citizens of the parish, but also to levee district director Reggie Dupre and board chairman Tony Alford. He characterized the progress as an “unheard of and great achievement” accomplished in the short span of a decade.

An important component of work being done in the area is the completion of Falgout Canal Road between La. 315 and La. 57. Construction projects contributed to what engineers said was “extensive settling” and pavement deterioration. The project consisted of repaving nearly three miles of roadway, and raising of more than a mile of it.

The project was awarded to Huey P. Stockstill, LLC in January of 2018 and construction began the next month. It was completed in December at a cost of $3.4 million. Dove and other parish officials gathered for a ribbon-cutting ceremony marking the project’s completion, which they said was an important development for both Dulac and Dularge.

Progress, Dove said, has also been made on construction of the Chacahoula Basin pump station. The pump is rated for 1,000 cubic feet per second, which translates to a million gallons every two minutes and fifteen seconds.

Terrebonne – and Lafourche – received good news shortly after the year started, with word that nearly $130,000 from Gulf of Mexico oil lease money collected by the federal government will be invested in coastal projects.

Gov. John Bel Edwards said the money is from the statewide Gulf of Mexico Energy Security Act and will be dispersed from 2020 to 2022. The state’s Louisiana’s Coastal Restoration and Protection Authority made the announcement jointly with Edwards.

“These investments represent a proactive mindset by the state of Louisiana and CPRA, allowing us to better defend against a hurricane or natural disaster and showing the citizens of our state we cannot and will not wait on someone else to provide us the protection we deserve,” Edwards said.

The Morganza system will receive $22 million for specific projects within its scope.

Another component of Terrebonne flood protection that will be paid for with GOMRESA money is the Houma Navigation Canal lock. It will be linked to the Bubba Dove floodgate – named after the parish president’s late son – and is expected to aid coastal restoration as well as provide protection from flooding.

The Bayou Chenes floodgate in St. Mary Parish will receive more than $70 million from the special funding. Although not located in Terrebonne, that structure will benefit the Good Earth. When the Atchafalaya River floods, waters travel to the Gibson area. In the past, barges have been used to slow down the flow of water from the Atchafalaya, but a permanent structure is preferred.

On the housing front, work to begin on the Parkwood Place subdivision is expected to add affordable options for homebuyers. GEM Builders is constructing the 144 single-family homes that are expected to grace the East Street location. The developers have been working closely with the parish council, and the parish office of Housing and Human Services.

Slab and wood construction will be the method used for building the houses. Pricing is expected to begin at around $139,000.

In early 2018 the parish council voted to accept streets and drainage servitudes on the project land, and to include the subdivision’s proposed streets into the parish 911 emergency response system. The vote, following a public hearing, was unanimous.

“These investments represent a proactive mindset by the state of Louisiana and CPRA, allowing us to better defend against a hurricane or natural disaster and showing the citizens of our state we cannot and will not wait on someone else to provide us the protection we deserve,”
– John Bel Edwards•