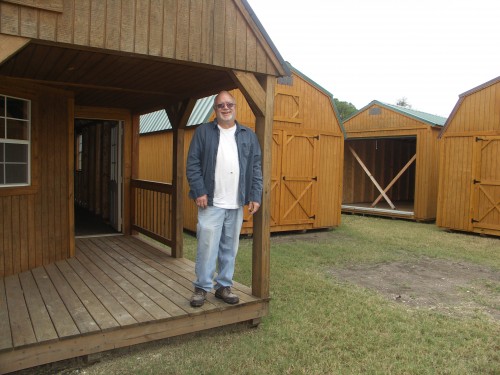 Anyone emerging from or driving toward the Houma Intracoastal Canal Tunnel, on the town’s east side, is certain to notice a lot filled with various storage sheds and portable buildings.

Those who take time to stop at the property addressed as 1300 E. Tunnel Blvd., bordered by Beatrice, Acadian and Odette streets, will discover more to this business than out-buildings.

The sign marking ABC Home Services (the entrance is actually on Odette Street) might not be obvious at first, but a massive array of merchandise – both outside and inside the metal warehouse – signals the starting point, from which many people could easily enter a surprising household treasure hunt.

“Well, I used to have a sign that said ‘Useful Stuff’ but the hurricane blew it down,” ABC owner Andrew “Scooter” Gilliland said, laughing heartily. “That’s what we have – a lot of useful stuff.”

Being useful is essential for Gilliland, his son, Josh, and three employees that make this business work.

This is not a junk yard or a flea market. Gilliland said there is more to his business than new storage buildings, propane service, masonry markers, miscellaneous items and moving truck rentals. An essential part of this operation involves rebuilding used appliances and selling them for less than traditional retailers or rental stores are able to offer.

“We service a lot of folks that can’t afford to buy large items at retail,” Gilliland said. He admitted that many consumers who could easily afford a washer and dryer or rebuilt refrigerator, for example, also become customers looking for good deals on products that are as close to new, and include a warranty, as refurbished products can be. “This way, people can get a stove or refrigerator and not be afraid of it.”

This merchandiser attends auctions and estate sales and searches the Internet to find products that can be made suitable for sale. Sometimes, he said, he might take two or three products of the same make and model to recondition into one unit with all the best parts.

Gilliland was not in the buying, rebuilding and selling business until out of necessity he was hit with an entrepreneurial spirit.

This businessman came to southeast Louisiana from North Carolina in 1977 to take an oilfield job. He met a local girl, married, started a family and made Terrebonne Parish his home.

During the past 35 years, Gilliland has worked in the petroleum industry, diesel mechanics and contract construction.

Gilliland was working as an independent contractor in 2005. During September of that year, in the aftermath of Hurricane Katrina, his workers left him and Houma for high-paying recovery jobs in New Orleans.

“I finished all the jobs I could finish and started selling off my equipment, including the refrigerators and freezers I had,” Gilliland said. “Somebody said he would buy a refrigerator we had in our office. Two guys got to fighting over who was going to buy it and I thought, ‘There might be something to this.’ So, I guess, that is how I got started selling appliances.”

Beyond refrigerators and washing machines, household treasure hunters are able to find concrete steps, chrome wheels, used crutches and even a full-sized totem pole among other constantly changing merchandise. “There is no telling what people will find here,” Gilliland said.

Some of ABC’s Derksen buildings measure more than 500 square feet and are built to code for very basic habitation. “People build camps with them,” Gilliland said. The building units can be purchased up-front and delivered to a customer or acquired with a rent-to-own arrangement.

Many ABC customers make an initial purchase that can range from a washer and dryer set priced at $350 to buildings valued in the thousands of dollars.

Customers often return to see what is in stock on any given day and visit Gilliland, even when they have nothing in mind to purchase.

The proprietor of ABC Home Service enjoys having regulars that simply want to know what he has available, but never turns down an impulse purchase. “There is not much challenge to this job,” he said. “I love making deals and trading with people. I’m just making a living and enjoying life.”

ABC Home Service owner Andrew “Scooter” Gilliland said he enjoys meeting people and watching them discover what he has to offer. Besides boasting the nation’s top sales numbers for Derksen Portable Buildings, Gilliland’s inventory of rebuilt appliances, auto parts, home wares, vehicle rentals and even a totem pole for sale supports his slogan of having “useful stuff.”