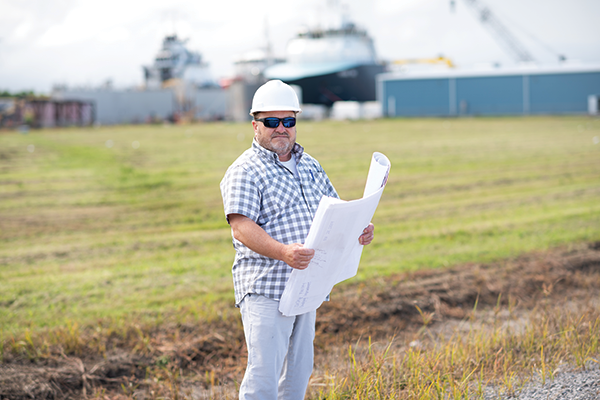 Port Terrebonne Building for the Future

LEADERS WITH PORT SAY SIGNS ARE POSITIVE FOR ECONOMIC RECOVERY

Two weeks ago David Rabalais went on a river cruise with some of the most influential people in his universe.

The Terrebonne Port executive director was able to secure face time with R.D. James, Assistant Secretary of the Army for Civil Works, as well as Col. Michael Clancy, commander of the New Orleans Division of the U.S. Army Corps of Engineers, over which James rules, during the annual Corps “low water tour” of waterways in the region.

Relationships such as those Rabalais has built with the Corps and other entities with power over the fate of Terrebonne Parish are vital, he acknowledges. Large in overall area, the Port of Terrebonne’s full stats on cargo carried through its waters have been difficult to quantify. But knowledge of the port’s role in the energy industry and other sectors is needed among decision makers, to dollars that can mean additional pumping of a major commercial artery, and the future success of plans to attract and keep businesses.

Of late, Rabalais has been able to relay good news. U.S. representatives Garret Graves and Steve Scalise, along with U.S. senators Bill Cassidy and John Kennedy, worked together to see that $9.5 million was awarded to the port for dredging. The money, Rabalais said, is essential because Terrebonne is not high on the national priority list. Limited federal resources mean lots of squeaky wheels.

Dredging of the Houma Navigational Canal, which carries ships to and from the Gulf of Mexico as a north-south channel, is overdue at various points. While Rabalais has been able to get help from Terrebonne Parish itself, that hasn’t worked for the expansive job that is needed.

The new infusion, Rabalais said, means that both the southern reach and northern reach of the Canal can be properly dredged, from the waters of Terrebonne Bay to the junction of the HNC with the Gulf Intracoastal Waterway.

“This year we got additional sediment north and south,” Rabalais explained. “There was a supplemental bill and it passed.”

The money for Terrebonne ended up coming out of the package, he said. But the delegation was able to put the money back in the federal budget through a hurricane mitigation provision.

“I give our delegation a lot of kudos,” Rabalais said. “They worked very hard for this money and they got it within 30 days.”

The Port of Terrebonne to many is the cluster of buildings, docks and cranes that lie between the HNC and Industrial Boulevard in Houma.

But it actually encompasses every navigable waterway within the parish, including the HNC as it meanders toward the Gulf of Mexico, and the docks at which vessels load or offload.

The Port Commission’s 680-acre site is one mile west of La. Highway 57 and the Houma-Terrebonne Airport. The HNC Port of Terrebonne is located on the Houma Navigation Canal within one-half mile of its intersection with the Gulf Intracoastal Waterway. This location puts the port in a strategic position to take advantage of significant cargo flows and marine traffic on both waterways.

Rabalais says the parish is a vital part of the region not only because of pioneering work done in the oil and gas industry, but its leadership role in construction and repair of marine vessels, and fabrication.

“The HNC is the lifeline for this industry and is our interstate to the rest of the world,” Rabalais said. “Thousands of jobs depend on this lifeline.”

The repair and construction facilities at the port can’t do a lot of good if the water is too shallow to float ships. This is why the port has engaged in a constant battle. Rabalais harbors strong hope that next year dredging to an additional depth, beyond its registered 15 feet, will be possible.

The Terrebonne port is ranked 98 out 150 US ports with cargo tonnage exceeding 2.5 million tons per year and growing.

“We made a commitment in this government to keep the HNC 15-foot navigable which is about 18-feet.” Parish President Gordon Dove said, acknowledging the port’s importance.

The Terrebonne Port Commission was created by state legislature in 1964 by act 485 as a political subdivision of the state. In its creation the Terrebonne Port was given the authority to levy an ad valorem tax of up to 5 mills. In 1970 the port purchased 400 acres of land for $1 million using capital outlay money from the state. It wasn’t until 1998 that the Parish entered into a cooperative endeavor with the state of Louisiana for a capital outlay grant to be used to develop the port property. Terrebonne Parish agreed to a 50/50 match with the state for a total of $7 million for the port development and its first tenant signed in 2004.

Rabalais said two new tenants are being negotiated with, although he is not at liberty to disclose who they are quite yet.

Other current projects include the expansion of LaSHIP, a Chouest affiliate that has played a key role in ship construction. Thoma-Sea, another major tenant, is at work building a factory fishing vessel, having gone under contract for two.

“A vessel like this has never been built in the U.S.,” Rabalais said. “They are diversifying.”

Rabalais said the port’s future is looking better than he has seen it for some time.