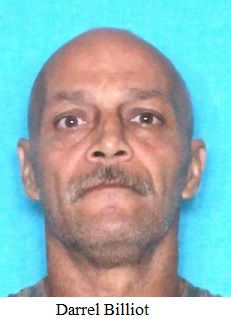 A Dulac man is believed to have killed his cousin, then himself.

At around 7:40 a.m. this morning, Terrebonne Parish Sheriff’s Office deputies were called to the 100 block of Oak Tree Court in Dulac to a call of an alleged suicide by hanging.

When TPSO arrived on the scene, the Grand Caillou First Responders were already there. The man was unresponsive and pronounced dead at the scene. He was identified as Darrel Billiot, 56, of Dulac.

During investigation, a woman alerted detectives to another mobile home within the same property where upon entering, detectives found an unresponsive female with injuries to her head. She was pronounced dead at the scene and has been identified as Lisa Dardar, 52, of Dulac.

Dardar and Billiot are cousins.

As TPSO investigated the case, they received information and authorities now believe Billiot is responsible for Dardar’s death.

During further investigation, TPSO detectives also were notified of a female juvenile who was sexually assaulted within the last 24 hours and Billiot was a suspect in the incident.

Billiot is a registered sex offender with the Terrebonne Parish Sheriff’s Office.

Autopsies for both of the deceased are scheduled for later today.

This case remains under investigation and anyone with information concerning this investigation is encouraged to call TPSO detectives, (985)876-2500, or Crime Stoppers, 1(800)743-7433, and may become eligible for a cash reward.