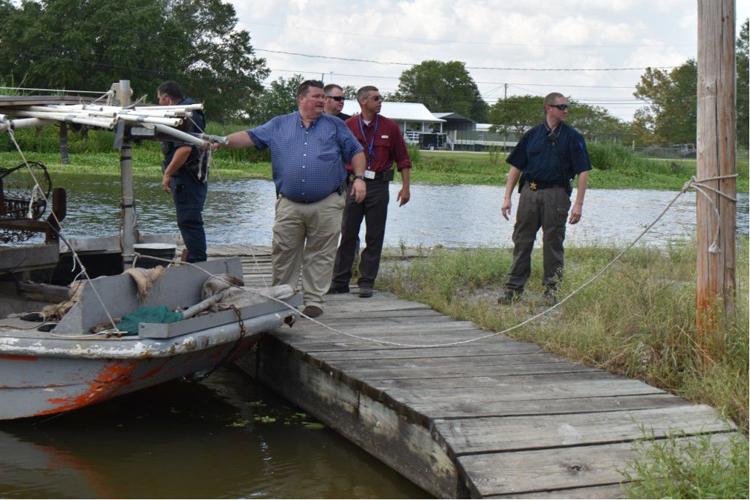 Two men are in the custody of the Terrebonne Parish Sheriff’s Office following a boat chase.

The first vessel was located on the day the investigation began.

Another boat was located on Sept. 13 – stripped of equipment and components – at a residence in Bourg.

A Water Patrol agent questioned some individuals and then traveled to a Montegut oyster dock where he observed a suspect on a small boat and an adult and a juvenile in another vessel who were regarded as suspects.

The boats left the dock. The vessel with just one person headed south. The other with the two people headed north on Bayou Terrebonne.

“Our detectives were on scene and were able to stop the boat with the adult and the juvenile at the Highway 58 Bridge,” Col. Daigre said.  “The Water Patrol agent in his marked truck continued following the other boat until he reached the Humble Canal, and then traveled on a shell road, where he encountered a Louisiana Department of Wildlife and Fisheries agent, and he jumped into the LDWF boat. The suspect’s boat was pursued on the water into the area of Wonder Lake. After the suspect hooked around from the lake into the Pipeline Canal he was taken into custody, shortly after 12 p.m.”

The operator of the boat stopped at the Highway 58 Bridge. He was identified as Phillip Brandon DeHart, 32, of Houma.

The operator of the other boat, which was apprehended in the Pipeline Canal, was identified as Tyler Paul Ray, 32, of Bourg.

That boat, authorities learned, was a stolen outboard.

An investigation in connection with these cases is continuing.