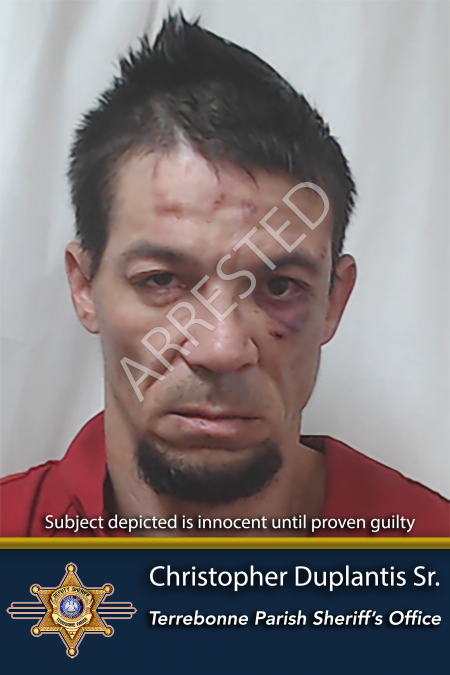 Terrebonne Parish Sheriff Tim Soignet announced that in the early morning hours of October 6th, a Chauvin man was arrested after leading officers on a short pursuit in Chauvin.  Christopher Patrick Duplantis Sr., 41, was arrested on charges of Speeding, Failure to Appear, Aggravated Battery, Aggravated Flight from an Officer, Disarming of a Peace Officer, and Resisting an Officer by Force or Violence.

A Terrebonne Parish Sheriff’s Office Deputy was patrolling the area of Bayouside Drive when a vehicle was observed traveling at a high rate of speed.  As authorities attempted to stop the vehicle, it was quickly determined that the vehicle was associated with a known felon, who had outstanding felony warrants for his arrest.  The Sheriff’s Office was privy to information that the offender has made previous threats of violence against Law Enforcement if he were to be confronted.

The driver fled to the area of Fanguy Street, where he exited the vehicle in an attempt to evade capture.  A Terrebonne Parish Deputy gave chase as Duplantis ran from the vehicle, which culminated in the Deputy deploying a Taser to assist in apprehending Duplantis.  The application of the Taser allowed the Deputy to advance on Duplantis, which led to him kicking and striking the Deputy.  During the incident, Duplantis attempted to disarm the Deputy of his Taser, which led to a physical confrontation between the two of them.  The physical confrontation ensued as Duplantis was combative with the Deputy, though the Deputy was ultimately able to gain control of Duplantis and place him into handcuffs.

Duplantis was treated at the scene by Acadian Ambulance Service, and later transported to an area hospital where he was medically evaluated and later released to the custody of the Terrebonne Parish Sheriff’s Office.  Duplantis was later booked into the Terrebonne Parish Criminal Justice Complex on multiple charges and is currently jailed on a $100,000 total by local judges.

Sheriff Soignet praises the work of the Sheriff’s Office Deputy and commends the efforts of all First Responders involved.  Sheriff Tim Soignet said, “This Deputy did an amazing job during a very dangerous situation.  This situation did not need to happen, and the actions and threats of the offender brought this encounter to a different level of safety.  This is a very dangerous offender known to Law Enforcement, and our community is safer now that he is in custody.”