Tree for Life Ceremony to honor those affected by cancer 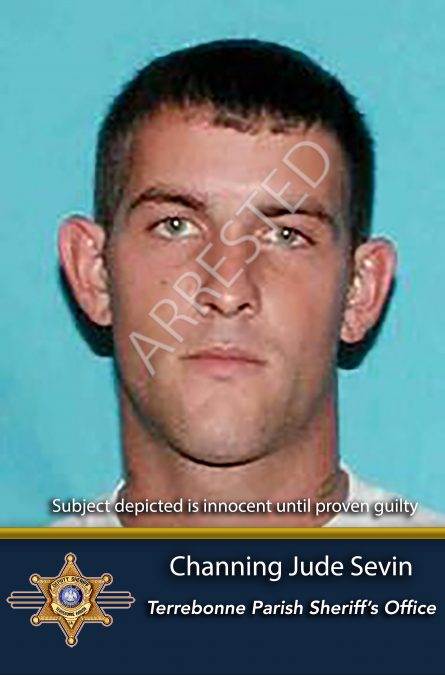 Terrebonne Parish Sheriff Tim Soignet announced the arrest of a Chauvin man on multiple charges in connection with a traffic stop completed by the Terrebonne Parish Sheriff’s Office K-9 and Patrol Division.  Channing Jude Sevin, 38, of Chauvin, was arrested for multiple narcotics and weapons related charges associated with the investigation, along with outstanding Felony warrants.

On November 22, 2022, shortly after 7pm, Deputies of the Terrebonne Parish Sheriff’s Office K-9 Division conducted a traffic stop on a vehicle in the 3200 block of Grand Caillou Road.  Deputies made contact with the driver, who was identified as Channing Sevin, and discovered that Sevin was wanted for several outstanding arrest warrants.  As Deputies placed Sevin under arrest, they located a container concealed in the pocket of his pants, which was determined to contain Methamphetamines.

As Deputies continued their investigation, they learned from Sevin that he was in possession of 2 firearms within the vehicle.  Upon further review, Deputies were able to determine that 1 of the firearms was deemed stolen, in connection with an unrelated Terrebonne Parish Sheriff’s Office investigation.  The firearms were removed and secured as evidence during the incident.

Channing Jude Sevin was later booked in the Terrebonne Parish Criminal Justice Complex on the charges and remains jailed on a $46,000 total bond by local judges.

Sheriff Soignet would like to commend the work of the Terrebonne Parish Sheriff’s Office K-9 and Patrol Division in this case.  Sheriff Tim Soignet said, “The work of our Patrol and K-9 Division is vital to the proactive enforcement that our office strives for every day.  These divisions work very hard to keep Terrebonne Parish a safe place for our community, and I couldn’t be prouder of their effort.”