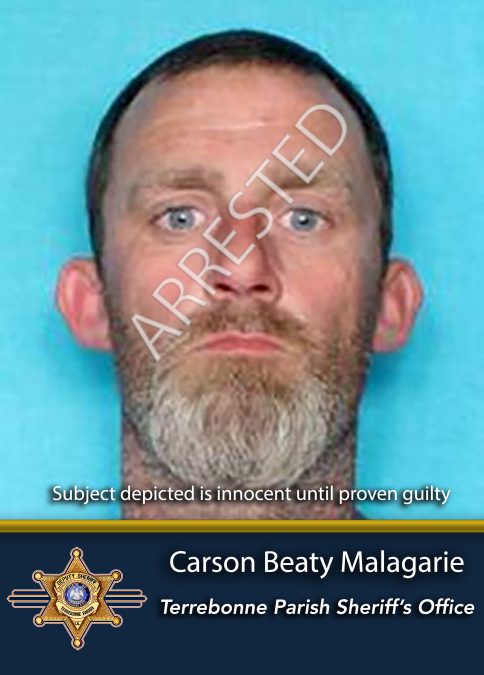 Terrebonne Parish Sheriff Tim Soignet announced the arrest of a Chauvin man, in connection with a Theft Investigation that spanned several locations throughout Terrebonne Parish.  Carson Beaty Malagarie, 41, was arrested for multiple charges associated with the investigation.

On November 2, 2022, Terrebonne Parish Sheriff’s Office (TPSO) Detectives learned that a Terrebonne resident was taken into custody in Morgan City, for being caught in the act of cutting and stealing catalytic converters from a vehicle in their jurisdiction.  Malagarie was arrested and charges in connection with the incident.  TPSO Detectives made contact with Morgan City Police Investigators, who provided information that evidence was located during a search warrant of Malagarie’s vehicle, which linked him to multiple similar theft at various location throughout Terrebonne Parish.

On November 29, 2022, Terrebonne Detectives learned that the TPSO Patrol and K-9 Division conducted a traffic stop of a vehicle that was discovered to be linked to Malagarie, in the 800 block of Hwy 182.  As Deputies attempted to complete the stop, the driver of the vehicle fled the area on foot, and eventually jumped into the Intracoastal Canal, to evade capture.  Terrebonne Parish Water Patrol Deputies eventually apprehended the male suspect from the waterway, who was identified as Carson Beaty Malagarie.

Carson Beaty Malagarie was later arrested for the outstanding warrants, along with charges of Speeding, Reckless Operation of a Motor Vehicle, Flight from an Officer, and Resisting an Officer.  Malagarie was booked into the Terrebonne Parish Criminal Justice Complex, where he remains jailed on a $106,000 total bond.

Sheriff Tim Soignet is pleased with the outstanding work completed by the TPSO Patrol, K-9, and Water Patrol Divisions in the apprehension of Malagarie.  Sheriff Tim Soignet said, “I’m very proud of the working relationship our agency has with our Public Safety partners.  Our Detectives have worked very hard to foster those relationships, which is vital to bringing offenders to justice.”