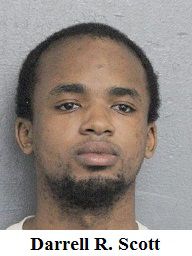 A 26-year-old Houma man is wanted for murder after a shooting yesterday that took the life of a 22-year-old man.

On Friday at approximately 11:38 a.m., Terrebonne Parish Sheriff’s deputies and detectives responded to The Landing Apartments on 1803 MLK Boulevard in reference to a shooting.

Upon arrival, deputies could not locate a victim, but there was evidence that a shooting had occurred.

Detectives recovered multiple bullet casings, a truck with bullet holes and blood stains on the concrete in the same area of the parking lot.

Shortly after, TPSO headquarters received a call that there was a man at a local hospital who was suffering from gunshot wounds.

Deputies went to the hospital and continued their investigation, which discovered that this man was shot at the above-listed complex.

He was identified as Damon Wallis, 22, of Houma. He was pronounced dead at the hospital.

After investigation, TPSO learned that the incident was a drug-related robbery, and there was marijuana recovered from the crime scene.

Detectives identified Jordan Ray, 19, of Houma, as being involved in the incident. They arrested him and charged him with illegal discharge of a firearm, aggravated criminal damage to property and possession of a stolen firearm.

Another man, Darrell Scott Jr., 26, is still at large and is wanted for second-degree murder in the incident.

Anyone with information regarding this investigation or the whereabouts of Scott is encouraged to call TPSO, (985)876-2500, or Crime Stoppers, 1(800)743-7433, and may become eligible for a cash reward.