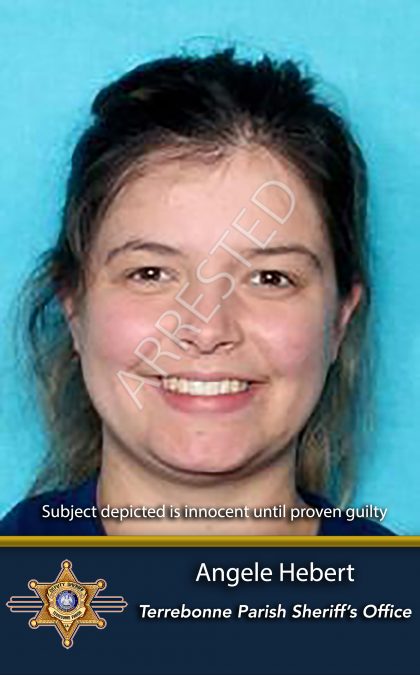 Through further investigation, Detectives uncovered evidence to confirm that the sexual relationship took place at the inmate’s place of employment on at least 2 occasions.  Detectives also discovered evidence to support that Hebert and the inmate were communicating through several social media platforms, including Facebook and Snapchat, as well as digital photographs that were sent to the inmate by Hebert which were of a provocative nature.

TPSO Criminal Intelligence Detectives brought the inmate in for questioning who confirmed his involvement in a sexual relationship with Hebert.  The inmate also provided details that were corroborated through investigatory findings.  The inmate was immediately removed from the Transitional Work Release Program and remanded to the custody of the Terrebonne Parish Criminal Justice Complex.

Hebert was placed under arrest for one count of Malfeasance in Office – Sexual conduct prohibited with persons in the custody and supervision of the Department of Public Safety and Corrections.  She was then transported to the Terrebonne Parish Criminal Justice Complex where she was booked and jailed.  At this point, a bond has not been set for the charge.

This continues to be an ongoing investigation and additional details will be released as they become available.  Sheriff Tim Soignet would like to commend the work of the Detectives responsible for investigating the incident.  Sheriff Soignet said, “This is a very disturbing incident, but no one is above the law.  As the leader of the Sheriff’s Office, I take it personally when a member of our team commits offenses which tarnish our oath, our badge, and our dedication to our community.  Despite the fact that these cases are not easy to investigate, this type of behavior will not be tolerated within this agency, and I know that our Detectives will do what is needed to bring absolute justice in this case.”