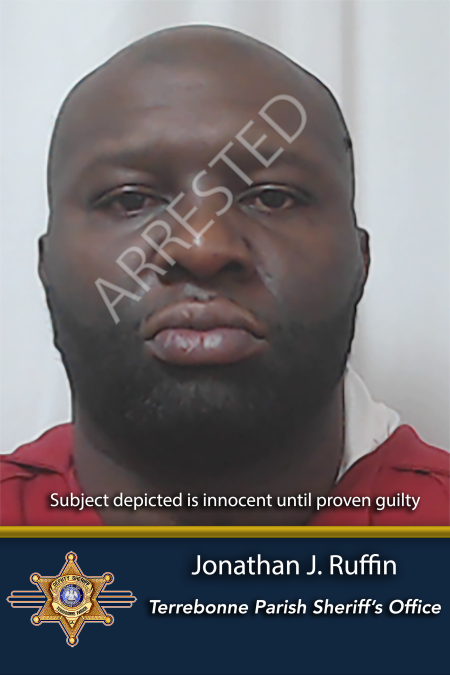 Terrebonne Parish Sheriff Tim Soignet announced the arrest of a Gibson man on multiple charges, stemming from a disturbance complaint that were investigated by the Sheriff’s Office Patrol Division.  Jonathan Johnell Ruffin, 35, was arrested on multiple felony charges in connection with his involvement in the incident.

On January 14, 2023, shortly before 11pm, the Terrebonne Parish Sheriff’s Office Patrol Division responded to the 4400 block of Southdown Mandalay Road, in response to a report of a male and female fighting inside a vehicle.  As Deputies arrived in the area, the Terrebonne Parish Sheriff’s Office received a distress call generated from the onboard emergency services equipment of a vehicle, where screaming could be heard from within.  A short time later, Deputies located a female, suffering from obvious signs of a physical disturbance, screaming for help in the 4600 block of Bayou Black Drive.  Deputies spoke with the victim, who is not being identified at this time, who provided information that she was involved in a disturbance with a male identified as Jonathan Ruffin.  The victim indicated that Ruffin struck her several times and stole personal belongings during the incident.  The victim stated that she ran from the vehicle for safety, as Ruffin fired multiple shots at her.

As Deputies continued to investigate, they determined the victim suffered several injuries during the disturbance but was not struck by gunfire.  Deputies processed the scene and discovered evidence to support the allegations made by the victim.  A short time later, Deputies learned that Ruffin was in the area of the disturbance, after being picked up by a relative of the victim.  As Deputies attempted to locate Ruffin, he was seen driving a driving vehicle on Bayou Black Drive, and as Deputies approached, Ruffin fled in the vehicle resulting in a crash.  Ruffin was taken into custody as he fled the scene of the crash on foot.  Deputies later discovered additional evidence of the altercation with the victim, within the crashed vehicle.

Jonathan Johnell Ruffin was arrested and charged with Domestic Abuse Battery, Aggravated Assault with a Firearm, False Imprisonment with a Dangerous Weapon, Possession of a Firearm by a Convicted Felon, Felony Theft, Reckless Operation of a Motor Vehicle, Driving Under Suspension, Driving with No Insurance, as well as outstanding warrants.  Ruffin is currently jailed at the Terrebonne Criminal Justice Complex on a total bond of $108, 200.00 by local judges.

Sheriff Tim Soignet would like to commend the quick response of the Sheriff’s Office Patrol Division, which directly affected the apprehension of Ruffin, and overall resolution of this incident. Sheriff Soignet said, “Our Patrol Division did an amazing job in this investigation and removed a very violent offender from our streets.”