Trick or treat yo’ self This Weekend with Community Festivities! 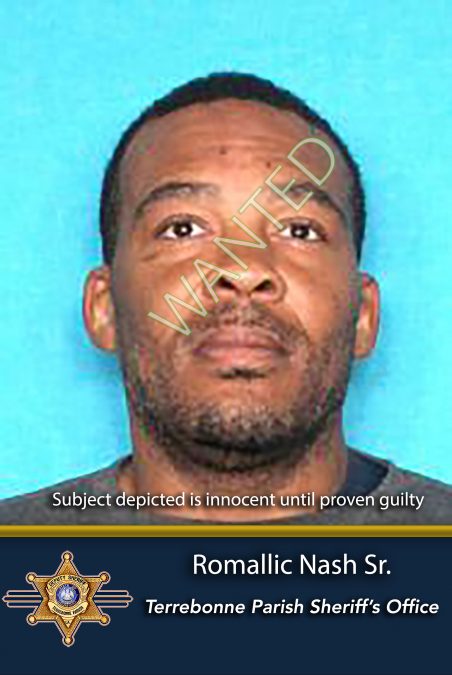 Terrebonne Parish Sheriff Tim Soignet announced a man is being sought in connection with a Homicide Investigation, which led to the death of a female victim. Violent Crimes Detectives are searching for Romallic Dynell Nash Sr., 50, of Gibson, who is facing charges of 1 count of Second Degree Murder in the incident.

On October 20, 2022, shortly after 4pm, Terrebonne parish Deputies were called to a residence in the 100 block of Tasha Court, in Gibson, after family members discovered the deceased body of a relative living at the residence, when the female that had not been heard from for several days.  When Deputies arrived, they confirmed the deceased body of a 52-year-old female, later identified as Stacy Boudreaux.  Deputies later discovered evidence at the residence of bullet holes and confirmed that Boudreaux was the victim of a gunshot wound. TPSO Violent Crimes Detectives responded to the scene and assumed control of the investigation.

Through further investigation, Terrebonne Parish Deputies and Detectives discovered information of reports of gunfire in the 100 block of Tasha Court, which was received on October 16, 2022, shortly after 4:30 pm.  Detectives were able to link the death of Boudreaux to the shooting complaint, through investigative means.

During the investigation, Detectives learned that Romallic Dynell Nash Sr. and an additional male subject were involved in a verbal confrontation on Vega Ct., which led to the shooting incident.  Detectives later recovered evidence, after a search of the Nash home, which is believed to connect Nash to the shooting death of Boudreaux.

Terrebonne Detectives have obtained a warrant for Romallic Dynell Nash Sr., for 1 count of Second-Degree Murder in connection with the investigation and are actively seeking his capture.  Nash is described as a black male, approximately 5’9” tall, weighing 230 pounds, with black hair and brown eyes.

Sheriff Soignet urges anyone with information on his whereabouts to contact Terrebonne Parish Sheriff’s Office Detectives at (985)876-2500, or a tip can be reported anonymously through Crime Stoppers Bayou Region by phone at 1-800-743-7433, online at CrimeStoppersBR.org, or through the Bayou Tips app on mobile devices. Tipsters could be eligible for a reward of up to $1,000 in cash if the information leads to an arrest.

ALL PERSONS ARE PRESUMED INNOCENT UNTIL PROVEN GUILTY