Suspect kills himself after police pursuit 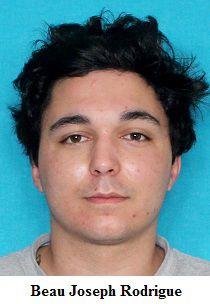 Sheriff Jerry Larpenter reported that on Wednesday, Dec. 18, 2019, at 12:25 a.m., deputies responded to a report of an individual threatening suicide at a residence on West Main Street in Gray. The caller had stated her son was making suicidal comments and jumping on vehicles.

Upon arrival at the location deputies saw two male subjects leaving the residence and jumping into a Chrysler automobile, swerving around a TPSO unit and taking to the highway at a dangerous rate of speed. The driver refused to pull over when directed to do so by deputies, running a red light and traveling with no headlights on. At times the vehicle crossed into lanes of oncoming traffic.

Near the Lafourche Parish line on Highway 309 State Police, who were called to assist, took the lead. Lafourche Parish deputies also assisted, at one point using a spike strip in an attempt to halt the car.

The suspect vehicle turned onto Highway 308, and several shots were fired from the vehicle. The Chrysler, still with two male occupants, turned into the driveway of a home on La. 308 at about 1:05 a.m. The driver exited the Chrysler and another shot was heard. SWAT teams were dispatched to the scene as a precaution. Further information revealed that the suspect driver had shot himself fatally.

Through subsequent investigation it was learned that the driver, 22-year-old Beau Joseph Rodrigue, had what are believed to be illegal narcotics in his possession along with drug paraphernalia, and was on probation from a prior arrest involving drug possession. Rodrigue’s passenger, whose suicidal threats resulted in the initial call to authorities, was questioned and later transported to a local hospital for evaluation.

Sheriff Larpenter wishes to thank the sheriff’s offices of Lafourche and Assumption, the Thibodaux Police Department, Louisiana State Police and Acadian Ambulance Service for their assistance during the course of this incident.