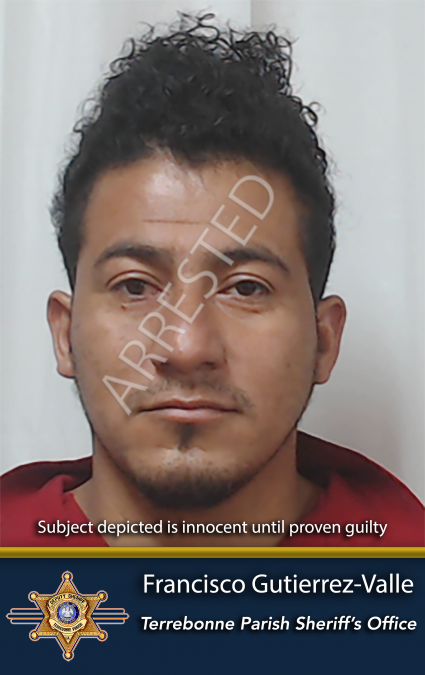 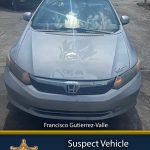 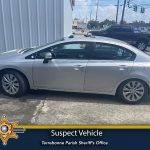 On October 3, 2022, the Terrebonne Parish Sheriff’s Office Patrol Division was called to the 4100 block of West Park Ave, in reference to a victim who alleged that she was abducted and raped.  Patrol Deputies responded, and made contact with a female victim, who provided information that she was abducted after walking in the area of West Park Ave, by a person described as a Hispanic male, driving a silver Honda Civic type vehicle.  The victim provided details to authorities that the male suspect attempted to convince her to get into the vehicle on at least 2 occasions, as she walked in the area to multiple businesses.  The victim stated that while walking in the 4100 block of West Park Ave, the male suspect approached her, brandishing a handgun, and forced her into the vehicle, where he brought her to a nearby business, and forced her into sexual intercourse.  The victim reported that she was later taken to a Terrebonne based motel, where the male suspect forced her into the room and raped her several times, before later dropping her off in the general area where she was abducted.

Detectives of the Terrebonne Parish Sheriff’s Office Special Victim’s Unit (SVU) responded to a local hospital where the female victim was taken after the attack. The victim received treatment for minor injuries as a result of the physical attack, as well as injuries associated with the sexual assault.  Detectives confirmed details during an interview with the victim and began a month-long investigation into locating the male suspect.  During the course of the investigation, Detectives located video footage and additional evidence confirming the information provided by the victim.

As the investigation progressed, Detectives of the Special Victim’s Unit were able to positively identify Francisco Gutierrez-Valle as the suspect responsible for this attack, and secured arrest warrants for the charges of Second-Degree Kidnapping, and First-Degree Rape.  Detectives were also able to identify the vehicle in question, and a BOLO was placed through several investigative databases.  As Detectives identified Gutierrez-Valle, his identity was linked to a previous disturbance complaint, investigated by the Houma Police Department, which revealed vital information, confirming the identity of Gutierrez-Valle.

On October 31, 2022, Francisco Gutierrez-Valle was located and taken into custody by the Houma Police Department, during an unrelated investigation.  Terrebonne Parish Patrol Deputies responded to the scene, and located a silver Honda Civic, which is believed to be the vehicle used to abduct the victim.  SVU Detectives later completed a warranted search of the vehicle, which yielded vital evidence that linked Gutierrez-Valle to not only possession of the vehicle but confirmed his identity.

Francisco Gutierrez-Valle was later jailed on charges of Second-Degree Kidnapping, and First- Degree Rape, in connection with the investigation.  Gutierrez-Valle remains jailed at the Terrebonne Parish Criminal Justice Complex, on a $3,000,000 bond by local judges.

Sheriff Tim Soignet confirmed that this is still an active investigation, and more information will be released as it becomes available.  Sheriff Soignet urges anyone who may have come into contact with Francisco Gutierrez-Valle or may have been approached by a Hispanic male in a silver Honda Civic, to contact the Terrebonne Parish Special Victim’s Unit at (985)876-2500.

Sheriff Tim Soignet would like to ask the community patience and privacy for the victim and family, as we continue to investigate the disturbing details of this case.  Sheriff Soignet would like to personally thank the Houma Police Department for their efforts in the apprehension of this dangerous perpetrator.  Sheriff Soignet said, “We are blessed with a tremendous Law Enforcement presence in our community, who are relentless when it comes to bringing justice to our victims.  I am proud of the job of our SVU Detectives and Patrol Division, who did an amazing job, on this very disturbing investigation.”