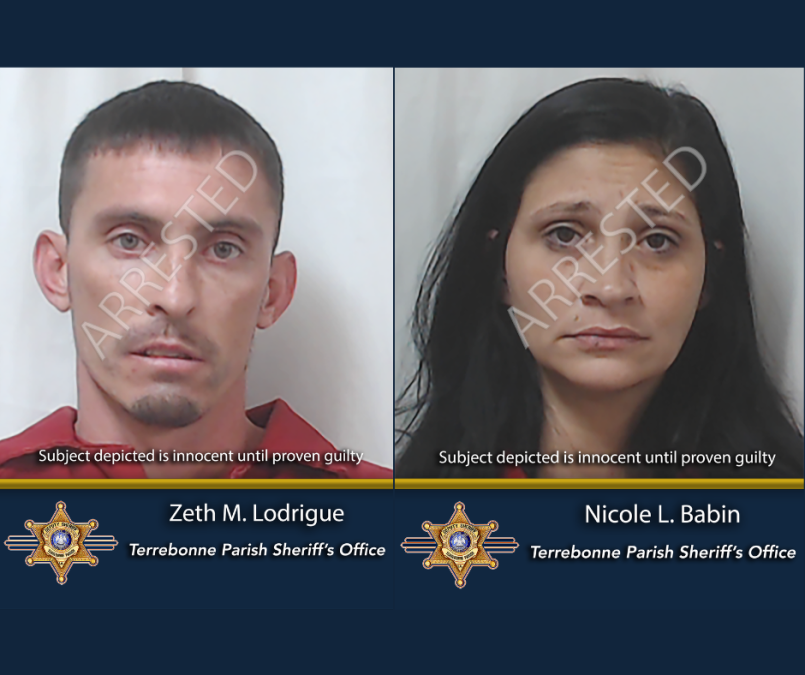 Terrebonne Parish Sheriff Tim Soignet announced the arrest of two people in connection with a Drive-by Shooting incident, which occurred on Louisiana Highway 57, Grand Caillou Road.  Zeth Michael Lodrigue, 33, of Dulac, and Nicole Leigh Babin, 34, of New Iberia, were both arrested for weapons related charges stemming from the investigation.

On January 19, 2023, shortly after 9pm, the Terrebonne Parish Sheriff’s Office Patrol Division were called to the 7000 block of Grand Caillou Road in reference to a disturbance complaint involving a weapon.  As Deputies responded to the area, the victims provided information that the alleged shooter’s identity was known to them and provided the name of Zeth Michael Lodrigue.  Additional information was learned that the suspect was within a gold-colored vehicle when Lodrigue allegedly fired a weapon at their vehicle, as they were driving on Grand Caillou Road.

When Deputies arrived in the 4800 block of Grand Caillou Road, they observed two vehicles parked in a private driveway, one of which matched the description of the suspect vehicle.  Deputies approached and were able to locate Zeth Michael Lodrigue within one of the vehicles, along with Nicole Leigh Babin, who were taken into custody without incident.  As Deputies continued their investigation, a firearm was located outside the vehicle, but in close proximity to the vehicle occupied by Lodrigue.  The investigation led to a search of the vehicle in question, in which additional evidence was located within to substantiate that a weapon was recently fired.

Deputies then spoke with the victims and learned that their vehicle were being followed by Lodrigue and Babin, as they drove south on Grand Caillou Road, after a brief verbal disturbance at a local convenience store.  The victims confirmed that while driving, the vehicle occupied by Lodrigue sped past them and fired a weapon at their vehicle, striking the car.  Deputies spoke with several witnesses who confirmed the disturbance at the local store.  When Deputies observed the victims vehicle, they located damage to indicate that the vehicle was struck by gunfire.

At the culmination of the investigation, Zeth Michael Lodrigue and Nicole Leigh Babin were both arrested on charges of 2 counts of Assault by Drive-by Shooting.  Nicole Leigh Babin was arrested on an additional charge of Possession of a Firearm by a Convicted Felon, connected to this investigation, and Zeth Michael Lodrigue was arrested on additional arrest warrants from an unrelated case.  Lodrigue and Babin remain jailed at the Terrebonne Parish Criminal Justice Complex, where they are being held on no bond by local judges.

Sheriff Tim Soignet applauds the amazing job of the TPSO Patrol Division, for their work in this investigation.  Sheriff Soignet said, “Our agency expect a great deal of effort and dedication to the protection of the people of this great parish from our employees, and this is another example of how our Patrol Division answered the call.  This was an extremely senseless incident, which could have led to a very tragic ending because of a minor argument.  Our Patrol Division did an outstanding job in bringing this case to a safe resolution, and for that I am grateful.”