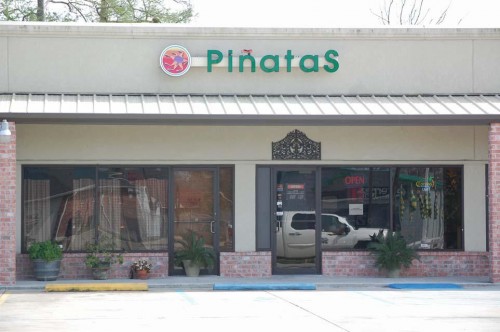 A few issues back I wrote about the Tampico Mexican Restaurant that got its start in Morgan City and has since spread to Bayou Vista, New Iberia and Lafayette. This month, I’m back to tell you about another great find in Houma: Piñatas Mexican Restaurant & Cantina.

It wasn’t until after I had already visited Piñatas twice that I learned that it is owned by another part of the Quintanilla or Izaguirre family, which also runs Tampico. Once again, it shows how pervasively the Quintanillas have put their unique stamp on Mexican cuisine in this area, from Tampico to La Casa del Sol in Houma, Thibodaux and Luling to La Casa in Cut Off and, now, Houma’s Piñatas.

Although similarities do exist, to its credit, Piñatas has taken strides and, to this writer, appears to have succeeded in creating its own brand of Mexican delicacies.

Piñatas has been part of Houma’s landscape for about three years, nestled conveniently on Enterprise Drive between Martin Luther King Boulevard and Main Street just behind Barker Honda and across from Express Glass. Despite the convenient location, I was amazed at how many times I passed the restaurant without really noticing it. A larger, more prominent sign and/or a billboard on MLK would certainly help one know of its existence.

Notwithstanding this “almost” fantastic location, the restaurant itself is spacious with three main rooms – two are for dining and one holds the “cantina.” The facility is spacious, with ample room.

The main dining room is painted a pastel yellow and, naturally, has various Piñatas suspended from the ceiling.

The second dining room can best be described as painted peach. It serves as a flow-over area from the cantina.

The dining areas are filled with wood tables with classic Mexican chairs. The cantina is spacious with a large screen projector to view your favorite sporting activities. Alternatively, there is a foosball table for use by the patrons, gratis, on a first come – first serve basis.

Piñatas offers traditional and Tex-Mex cuisine at moderate prices in a hacienda-style setting, complete with an extensive menu.

Upon arrival at your table, Piñatas serves tostados and salsa in the typical fashion. The salsa is homemade – not too hot but with plenty of zest – but was more watery than what I am accustomed to.

On my first trip, I inquired as to which dishes are most recommended and received the pat response, “It’s all good.” After a bit more inquiry, I was sold on the Parilla Fajitas Deluxe (with chicken and steak). The fajitas dish [$21.95] is designed to serve two people, with your choice of any two: steak, shrimp or chicken.

Fajitas seem to have become the staple for Mexican restaurants in the last 20 years and these did not disappoint. The flour tortillas were fresh and hot. I understand you can also order corn tortillas as a substitute.

We also tried the Milaneza Mexicana [$14.95], which can best be described as a Mexican chicken fried steak. Basically, it is beef tenderloin dipped in egg batter coated with breadcrumbs, topped with Piñatas’ own ranchero sauce.

Like most of the main entrees, beans, Mexican rice and tortillas accompany your order. I had never tried this dish before and had no idea what to expect. The meal was lighter than I expected and the ranchero sauce provided a good complement to the steak. I hope to try this meal again but, quite frankly, the menu here is so extensive that it may take a while, as I am already tempted to try other menu items.

For dessert, we did try and enjoy the pastille de leche, which is a variation of a white cake soaked liberally in something akin to condensed milk. It was my first time trying this dish and I’m glad I did.

On our next trip, I decided to test Piñatas from my children’s point of view. Sometimes Morgan and Janie experiment and try new dishes.

Janie chose the beef soft taco. The refried beans were very smooth and prepared properly, as was the soft taco.

Although these were simple menu items, your kids should be very satisfied with these offerings.

To mix things up, I chose off of the restaurant’s new Lenten menu, which adds more seafood to the traditional Mexican menu. During Lent, visitors will find among the usual entrée choices grilled shrimp or tilapia; crawfish enchiladas; burrito or crawfish chile relleno; a crab burger; and shrimp seafood turnovers. The appetizers also include crawfish quesadillas; crawfish nachos; and stuffed jalapenos with either crab or shrimp.

Since it is Lent, I felt the urge to get the crawfish burrito from this menu. The burrito was excellent, smothered in a white cream sauce.

Most of the Lenten dishes are served with a side of white garlic rice. The burrito was not, but the meal did not need anything extra. My burrito hit the mark and I was impressed with the freshness of the ingredients.

I liked the fact that the restaurant added special items for Lent to its already full menu. That only confirms that Piñatas appears to have an order to please just about anyone in your party.

I did notice a buffet station resting on the far wall in the main dining room. The staff revealed to me that they do serve a lunch buffet Tuesday through Friday.

One of my pet peeves at restaurants is the quality of service and the friendliness of the staff. I’m happy to report that everyone I dealt with was professional and eager to please.

For diners looking to relax and imbibe in a casual setting, the cantina serves an array of drinks, including just about any type of margarita known to man. In addition, Piñatas makes its own homemade sangria and serves a good selection of cerveza, including domestic and Mexican, e.g., Negro Modelo, Dos Equis, Corona and Tecate.

Once again, the debate about how margaritas are best served – “frozen” or “on the rocks” – rages on. Piñatas just adds “what flavor” margarita to that debate.

Overall, Piñatas offers a solid menu and is a solid addition to the Tri-parishes’ dining venues. I urge you to take the 100-yard detour on Enterprise the next time you cruise MLK.