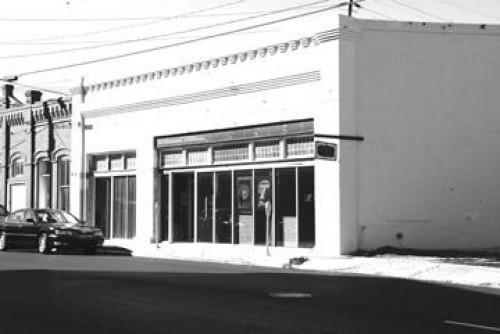 Housed in the renovated building formerly occupied by Bayou Vue Café, Bilello’s Café presents a tantalizing example of a restaurant that is quite good, but which could be excellent with some tweaking and a dash of imagination.

The building used to be home to a store, and now provides a visually arresting interior of bare brick walls, high ceilings, and a “warehouse district” sort of feel. The main dining area is a huge room (as high as it is wide), with a bar on the left side. Ample tables and chairs are flanked on the right side by a row of booths. Toward the back sits another dining area leading to a very cool (especially at night) al fresco area for temperate times.

The menu is kept within modest boundaries, both in quantity and selection. What you’re basically met with is the usual appetizers (fried onion rings, fried chicken strips, spinach and artichoke, cheese sticks, chili cheese fries, etc.) soups, salads, sandwiches, a few pasta dishes and four or five entrees of the fried and broiled variety. Given the fact that Bilello’s chooses not to stray from the tried and true, you would expect them to do the few things they offer well n and for the most part you’re not disappointed.

Our first trip was on a Saturday night. I was told after the fact that I missed out on the Saturday special, fried chicken. This unimpeachable good authority says it is not to be missed, advice I plan on taking in the near future.

In the meantime, we chose to skip the appetizers in lieu of cups of chicken and sausage and shrimp and crab gumbos. These staples of Houma/South Louisiana restaurants are what many consider to be the true test of an establishment’s worth.

For the most part, Bilello’s passes with high marks. The seafood gumbo presents an intense aroma suggesting a seafood stock was used along with the freshest ingredients. Hunks of crabmeat and shrimp swam in a slightly reddish soup that hit all of the right notes.

The chicken and sausage variety had a nice brown base with what seemed like andouille sausage and fresh white meat chicken. Acadiana would be proud of Bilello’s version of this classic dish.

We next tried the sautéed vegetables and pasta with added broiled shrimp. This dish, modestly described on the menu, turned out to be quite a hit. The vegetables (zucchini, squash, bell peppers, and mushrooms) were cooked perfectly for our taste, and by that I mean not so much so that some texture and crunchiness survived it. The shrimp tasted freshly caught and plump and well-seasoned with cloves of garlic and other subtle herbs and spices. Again, the dish’s stock seemed to be a reduction, with the juices of the vegetables and seafood blending harmoniously.

We also had the broiled filet flounder with shrimp and crabmeat dressing. This too turned out to be much more than initially met the eye. The flounder was wrapped snake-like around a huge hunk of the stuffing. This dressing turned out to be an irresistible blend of basic flavors cooked just right. The ratio of shrimp and crab meat to the stuffing was very much in favor of meat over bread, and was all the better for it. Not for the faint hearted, this dish was extremely rich but impossible to leave unfinished.

Our next trip was at lunch, a bustling place on a Monday morning. Bilello’s features daily lunch specials, and on this date it was “loose meat spaghetti” with a side order of sautéed squash and zucchini. The soup of the day was a “lemony chicken and eggplant” concoction.

The spaghetti dish was tasty enough, a bit heavier on the pasta than what I would have preferred, but the sauce was unexceptional. The soup was on the bland side, with the flavors muted rather than accentuated by any lemon zest or any other flavor notes. We also ordered the grilled steak sandwich. The steak was thin but flavorful and moist and we didn’t have to make any unsightly deposits into our napkins of unchewable portions.

Another school of thought has it that a Cajun restaurant’s litmus test is a good roast beef sandwich/po-boy.

Bilello’s offers its “Home Cooked Roast Beef” on white or wheat (“9 grain”) toast/bun or po-boy. I opted for the multi-grain. The sandwich delivered on its promise as the roast beef was slow-cooked, shredded and flavorful.

The juiciness of the meat came from a natural au jus rather than the sloppier, bread-destroying thicker variety favored by some New Orleans restaurants, a touch I found missing n a good, if not great, sandwich anyway.

The service at Bilello’s was spotty. We were waited on, on our first visit, by a waitress who admitted to us that this was only her fourth day on the job. Okay, but n there still could have been more familiarity with the menu and more accuracy in getting our orders correct.

The other visits featured better service but there was more than a hint of indifference present.

Bilello’s has promise n fulfilled and not-so-fulfilled in almost equal parts. We can hope in the future for a shot of imagination and a dash of excitement to tip the scales more to the good.