Is I-49 dead in south Louisiana? 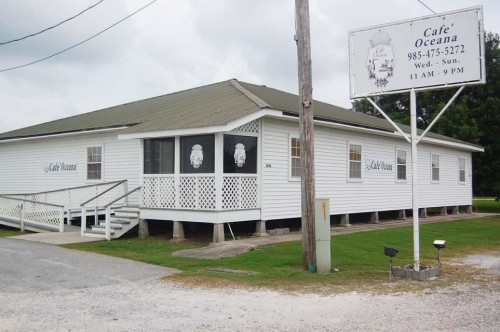 While chain restaurants increasingly dominate the local landscape of food offerings in the Tri-parish area, locally-owned seafood restaurants have proven to have staying power. Many of these restaurants promote family dining, offering fried fish and fried and boiled shrimp, crabs and crawfish, with limited diversity. However, some promote a more refined sensibility, combining seafood and steak with culinary art.

Cafe Oceana in Golden Meadow is the latter.

Originally an old, yet popular truck stop diner named Rose’s (relocated nearby), the small wood-framed, raised structure is home to locals and workers seeking a classier full-service food option. Some might ask what an upscale cafe is doing on a Golden Meadow back road, but locals know about the huge number of hungry diners traveling by bound for the oilfields and beaches.

So, leaving the holey jeans in the closet and taking our appetites, my companion and I made the journey down Bayou Lafourche to sample this restaurant we’ve heard so much about.

The inside is subdued with dim lighting and a clean-cut, formal atmosphere. Being a Sunday evening, patrons were sparse and the dining room seemed eerily quiet. Music would have helped, although I can imagine a full dining room would have provided ample noise.

We were quickly greeted upon entering and were given the option to select our preferred table. The hostess doubled as our waitress and, like most people in South Lafourche, she was friendly and genuine.

The menu at Cafe Oceana includes a number of appetizers, salads and seafood, meat and specialty dishes. There are a few pasta offerings and about a half-dozen sandwiches. However, the restaurant’s soup offerings are limited to one, and it is a rotating “soup of the day.” On this day, it was chicken and sausage gumbo.

Lacking additional soup choices, we ordered a cup of the gumbo ($4.95) and the seafood crepes ($10.95) as appetizers. The gumbo could only be described as forgettable, with hearty servings of meat but lacking the robust flavor expected from a Cajun classic. On the other hand, the seafood crepes – or rather crepe, since there was only one, made an instant impression.

I fell in love with crepes during my time in Paris, but only as a dessert. Crepes come in many different forms and this particular one consisted of shrimp, oysters and crabmeat, lightly seasoned and folded inside a paper-thin pancake finished with a rich cream sauce … ca c’est bon!

After a little conversation and a few crackers left on the table for taking, our entrees arrived. I ordered the broiled seafood platter ($20.95) while my companion chose the 8-ounce rib eye steak ($19.95). For a broader sampling, we also requested the two-piece Southern fried chicken ($6.95).

The seafood platter and rib eye were both presented in distinct metal serving dishes and were lined in seasoned butter unique to each dish. The rib eye was presented well, seared and sizzling in a mild butter sauce. It was cooked perfect to order and was seasoned with a light accent of very unique Creole spice. The rib eye meal included a delicious baked potato with traditional fixings including butter, sour cream, bacon bits and chives served separately on a personal potato bar.

After a few minutes of waiting for all of our entrees to arrive, I was presented with my broiled seafood platter served with fries. The seafood included the Cajun staples of oysters, shrimp and a fish of the day aligned in a circular pattern, with the fish in the middle. The platter was lined with a wine and butter sauce that was light in flavor and a nice match to the seafood. The seafood in the platter was broiled well and delicious, but the serving was perhaps too small for a hearty appetite. The side of fries was served on a separate white plate, and rightfully so, since it was a bit disappointing. Having been served room temperature, the fries were dry, colorless and bland. I had expected the restaurant to make its own form of fries in house or adapt a seasoning to spice things up a bit … so much for expectations.

As for the two-piece Southern fried chicken, it was cooked to perfection and perhaps the best I have ever tasted. Cafe Oceana definitely has fried chicken down to an art.

Although all of the entrees were delicious, there were a few things that could have enhanced our dining experience. The food, although served hot, arrived at our table over the course of five minutes instead of all together. No one cares to stare at a steaming, aromatic dish with hands aside waiting for a companion’s entree to arrive.

While the sauces complimented our entrees, the bread served only to disappoint, being stale in texture.

Although the service was adequate, greater attention is always expected from a fine-dining restaurant. And, no need to worry about which fork to use at Cafe Oceana, because there is only one.

Among the many small town restaurants I have visited, Cafe Oceana fits in right among them as being interesting and unique. While the food and service rank high among nearby offerings, it might be considered less than excellent when compared to the numerous restaurants in bigger cities.

The most important thing about the cafe is that it provides the people of the bayou area a choice of food and setting not previously available nearby.