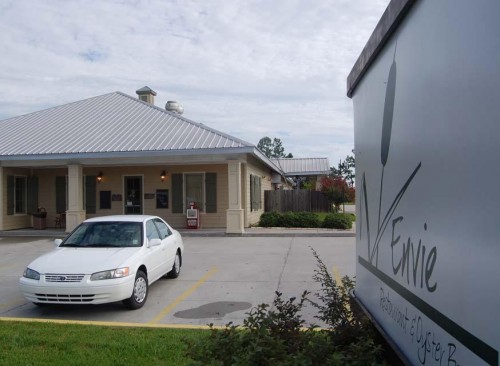 I have lived in many destinations around the United States and abroad. I enjoyed sampling the local culture and cuisine but always longed for the Louisiana flavors of my youth.

During my travels, I quickly learned to steer clear of menu items with “Cajun” in the title and any seafood dish for that matter as it would be disappointing. I once asked for Cajun seasoning and was brought a tablespoon of cayenne. It was then that I began to develop a deeper appreciation for our local seafood industry and cuisine.

I also rarely meet a stranger as people here are so friendly and welcoming. The Envie Restaurant and Oyster Bar in Thibodaux is just such a place with a comfortable atmosphere and a mostly homegrown seafood menu.

Upon entering Envie, guests are met with a spacious dining room with a small bar tucked in the corner and decorative mural depicting a local fishing camp. The plantation green tablecloths and pleasant décor completed the scene.

I was promptly greeted by a staff member who was friendly and knowledgably answered my many questions about the menu.

While waiting for my drink to arrive, I went to the restroom to have a look. It was impeccably clean, which is always a plus! I noticed some large rooms past the bathrooms that my server said are for large catering functions of up to 700 guests.

Reviewing the menu, I noticed the lunch offerings are a limited menu with more items available at dinner. There are some interesting appetizers to choose from such as eggplant Envie ($8.95), crab cakes ($6.95), and shrimp en brochette ($7.95).

I chose the oyster en brochette. The oysters arrived in a shallow dish artfully arranged with a light lemony cream sauce underneath. I noticed a thick strip of bacon wrapped around each oyster, which appeared to be deep-fried. My first taste was crispy bacon followed by an oyster chaser and a light lemony finish from the sauce. The dish was well balanced, satisfying, and a good start to my meal. The homemade onion rings $(4.95) were also crisp and delicious.

Next to arrive was a cup of seafood gumbo ($3.75). It was a dark concoction with the visible signs of okra with rice served on the side. As I stirred in the rice, I noticed tiny shrimp and a small piece of crab used to flavor the soup.

Obviously, there are some fine pot cooks working here. The seasoning was nice and flavors were definitely south Louisiana. I wish the dish was offered with some medium-sized shrimp added just before service so as to retain their texture, but this is just a personal preference. Overall, the dish was a success.

Envie offers a soup and salad bar “all-you-can-eat” option ($10.95) for lunch. I opted to try the Envie shrimp remoulade salad ($6.95). The white remoulade sauce had a tart taste of vinegar loaded with herbs and a hint of horseradish set on a bed of mixed greens.

It was a nice salad for a hot day and something I would order again.

My next selection was the Chicken ‘Polenville, which is offered either grilled or fried. I chose fried, figuring I could start my diet tomorrow. Well folks, this dish did not disappoint.

The chicken was crisp and moist and topped with a rich crawfish stew that gave me the same homey sensation as the gumbo. It was seasoned well and gave me a lingering hint of cayenne.

It stayed true to the flavor profile of the area’s cuisine surely prepared by a local.

The chicken was served with carrots that were sweet and tender in true “plate lunch” style. The portion size was ample, as I had some left over to take home.

Envie also serves breakfast at a great price, so I couldn’t resist coming back earlier. I ordered the crawfish omelet ($5.95) and my guest had a Cabildo Breakfast plate ($2.99). My omelet was wonderful.

I loathe omelets with the surface covered in brown, overcooked egg, so I am always skeptical when ordering. I was pleasantly surprised to see no spots on my omelet and it was filled to the brim with crawfish, sautéed vegetables and cheese.

The omelet was served with hash browns and two large biscuits that were nice with the honey at the table.

The Cabildo came with eggs cooked to order, hash browns, a ham slab and two biscuits. It’s a breakfast that is hard to beat for the price.

The cooks at Envie produce comforting, straightforward food rooted in south Louisiana flavors to match the servers’ friendly attitudes so if you are in the mood for a relaxed atmosphere and a good meal, give the Envie Restaurant & Oyster Bar a try.

Editor’s Note: The Gumbo Entertainment Guide welcomes the Gumbo Guru to our staff. A graduate of a nationally recognized cooking institution, the Guru has traveled the world experiencing various cuisine.