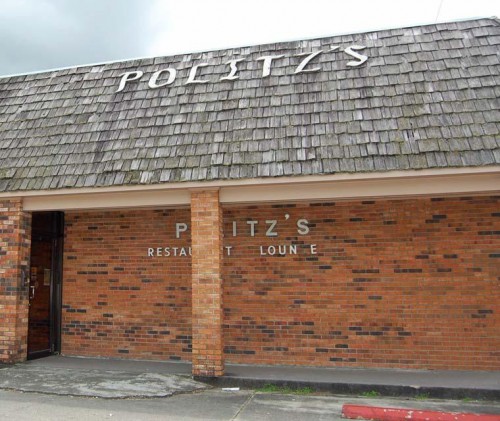 I spent a great deal of time on St. Mary Street (aka La. Highway 1) in Thibodaux, but usually in passing to and from Baton Rouge and Houma or locales in between. With each trip, I reflect on whatever happened to Bilello’s Restaurant – that mainstay on St. Mary Street in the 1960s through the ’80s.

This is one of those establishments that I recalled spending some time in during the early ’80s.

When I returned to Louisiana several years ago, I kept inquiring about Bilello’s. I subsequently learned that the name of the restaurant changed in the latter part of the decade to Politz’s, which I assume was part of the passing of the guard from one owner to the next.

To many of you, I may be stating the obvious, but the news of this change simply didn’t reach me during the many years I lived out of state.

In any event, I finally visited this Thibodaux dining institution for a meal.

Quite frankly, I don’t believe the interior or the exterior of the restaurant has changed since I first frequented this establishment as Bilello’s nearly 30 years ago.

The restaurant consists of two large dining areas, dark carpet and terrazzo floors in the work areas, with a large bricked archway granting entrance to the main dining area.

You seat yourself in the surprisingly ample dining area. I say that because I was amazed at the capacity of the restaurant, as the relatively small parking lot in front led me to expect a smaller location.

We descended on Politz’s on a Saturday night and, while we were able to find a table, the facility was packed, which is generally a good sign.

Politz’s Restaurant is only open three days of the week: Thursday, Friday and Saturday nights for dinner and, for lunch only, on Friday afternoon.

The menu is extensive, to say the least, and may take some time to digest if you haven’t heard about it beforehand. Items literally run the gamut from seafood to steaks to Italian dishes.

One of my dining companions had heard good reviews of the soft shell crab but, alas, Politz’s was out on this particular evening. That should give us reason to return.

It was difficult to decide what to order and, without the help of our waitperson, we might still be contemplating our selections. We started with the half-oysters and half-shrimp Bienville [$11.95]. The selection consists of an amalgamation of breaded shrimp and oysters, baked in a tangy olive oil.

It was a very rich start to our meal.

The bisque was a fair selection, but a bit salty and needed to be seasoned to taste. My palate simply seeks a bit more zest.

We also tried the wop salad as an appetizer. It is your basic Italian salad, complete with iceberg lettuce and Italian dressing infused with some tangy pepper. Overall, the salad reminded me of Mosca’s salad, without the crabs.

For our entrées, we went Italian on this particular evening, choosing the veal and eggplant parmigiana [a full order costs $11.95; a half-order is $8.95]. Each selection is served a la carte.

We each asked for a half order, which is more than enough for a meal. The only way I would order a full order is if I anticipated sharing with another person or knew in advance I intended to take a doggie bag home. Our waitress did forewarn us about the serving portions, which are huge apparently for all of the restaurant’s selections.

I greatly enjoy eggplant and this dish did not disappoint. The eggplant is smothered and covered in a rich tomato sauce and topped abundantly with melted mozzarella cheese. High cholesterol content and good.

The veal parmigiana was more of the same but with veal. Unfortunately, the veal was tougher than we would have liked and, given the wide menu selection, believe the seafood platter or steak options may catch our interest next time.

We did order the garlic bread [$1.50], which was saturated in butter. My heart said eat only one piece, but my mouth had to sample until the last drop.

The size of the meal prevented us from indulging in a dessert. We did, however, get to view the chocolate ice cream sundae [$3.50] at the adjoining table. It looked appealing and is definitely large enough for two.

The service was relaxed and, although the facility could use some updating cosmetically, we were quite comfortable.

You can observe a great deal about a restaurant from the other patrons. It was obvious that Politz’s has a strong, loyal following. I suspect that is due to the casual atmosphere and consistent food preparation. They have their menu staples and you know what to expect when ordering.

Overall, Politz’s was difficult to gauge. I know why people enjoy it. Politz’s is not trying to reinvent the wheel or create new dishes; they simply stay with the tried, true and consistent meals that have kept customers coming back for generations.