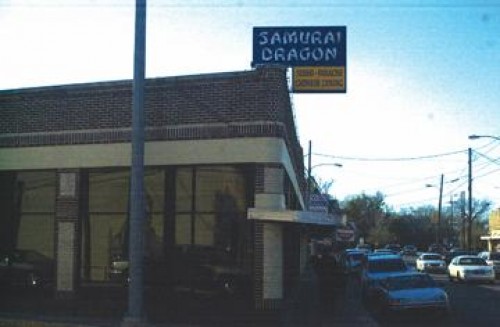 Already a raging success story, Samurai Dragon has recently moved into its expanded quarters, threatening to dominate downtown Houma like a combination Ming Dynasty/Kamakura Shogunate. (Trust me on that last one, but it is Japanese.)

With its potent union of Japanese and Chinese cuisines and its penchant for expansion, can other Asian fare be far behind for this ambitious restaurant? Time will tell. But for now there’s plenty to enjoy in the present.

Samurai Dragon sits on the corner of Lafayette and Main streets, housed in an old clothing store. It’s renovated like so many other downtown Houma restaurants and merchants, but it’s got appropriate Oriental touches like billowing paper light fixtures and swooping clean lines in the booths. Those booths offer a unique perspective as the view of neighboring booths is blocked by smartly-styled dividers, but yet plate glass windows give full view to the street. (They’re tinted just dark enough so that those outside can’t see in nearly as well as those inside can see out.)

The high ceilings and brick walls add drama and scope and they’re not wasted by a failure to augment them with accents of art and color. The new sections were not only necessary to handle the overflow lunch and dinner crowds, but also to thankfully move the pungent smoke-producing hibachi grills to an isolated area in the back. (They weren’t operational as of this writing, waiting on the fire marshal’s clearance.)

At the very back sits another huge dining area with a great-looking new bar.

The maitre d’s steer patrons to available tables or to comfortable waiting areas. Service is quick, attentive and knowledgeable. And also helpful enough to offer and suggest splitting an adult portion of Chicken Lo Mein for two nine year-olds who thought they could each handle the whole thing. Throw in the hibachi chefs and their Yangtze vaudevillian shtick, and the service rating goes to the stratosphere.

The menu is as sprawling as the environs. Seriously, it would take a very long time to work your way through even half of it. Although as typical of Oriental restaurants, there’s a lot of overlap among the dishes, with minor variations warranting separate menu item status.

The Sino-Japanese ratio is just about 50-50. On the Japanese side, there are starters aplenty like seared beef or tuna with teriyaki sauce, chicken, shrimp or vegetable tempura (not “Takee Outee,” cowboys), and Gyoza (“Asian style pork or chicken potsticker”).

Chinese appetizers include the usual suspects such as the Bo Bo tray and all its constituent parts offered separately, but also the not-so-usual such as Crab Meat Delight and Red Pepper Chicken Tenders.

We skipped these for the sushi and rolls. Sushi is judged on its freshness and accompanying sauces, and both characteristics were found in spades. The tuna and squid were still squirming, and the eel sauce was potent but not alarming. The salmon was deep water and not farm-raised, and the mackerel was holy enough. Also present and still-to-be-tried were the eel, flying fish and smelt roe, octopus, Hokki clam, scallops, sea urchin, etc.

Entrees tried included the Sizzling Wor Bar, which features jumbo shrimp, chicken, roast pork, and sliced beef tenderloin sautéed with vegetables (broccoli, mushrooms and onions), and yes, served on a sizzling platter. All of the individual meats and vegetables were fresh and tasty, with a seared open flame taste predominating. But the sauce was a bit disappointing, as it really added nothing but a bit of bland gumminess. The aforementioned Chicken Lo Mein was better, with the sauce and noodles imparting a sharper flavor. Portions of everything were generous.

On other visits we tried the hot and sour pork, which again starred big chunks of meat but this time battered and fried in a butter sauce. The batter was fluffy and huge, and seasoned within. It’s best eaten quickly, however, as the sauce (as advertised, more sour than hot as long as you avoided the obvious peppers) made it quite soggy after a while. The Imperial Shrimp had a similar batter, with a tamer sauce. The Black Bean Garlic Chicken actually sounded better than it tasted, although it was a very respectable example of the species.

The combination fried rice was outstanding, as it had a golden glow and a similarly luminous taste. A litmus test for Chinese restaurants, Samurai’s version passed with flying (and unique) colors.

The hibachi experience: will my nine year-old ever tire of it? But hey, rituals have their allure and you get to see how your food’s really cooked. On prior trips these performance artists were suitably disarming and reasonably accurate with their egg tosses; I’m sure the same level of professionalism will return when the grills fire up. And fried rice doesn’t get any better than right off the hibachi.