…THAT’S MR. PO-BOY TO YOU! Mr. Po-Boy grows up after a long childhood 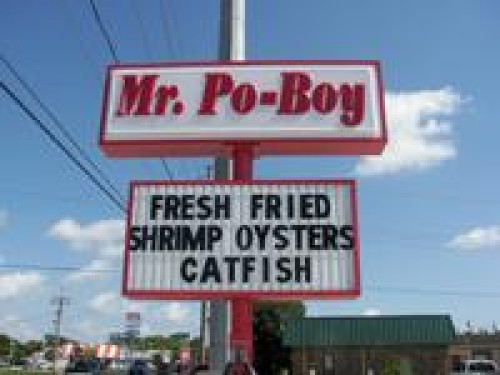 Mr. Po-Boy has been in operation since 1985. For the first 20-plus years it sat in a building no bigger than a glorified snowball stand on North Van Avenue. “Po-Boy Jr.” would have been a more appropriate name.

Started by James Burton Sr., it was sold to his daughter, Kayla, in 1996. She wanted to expand in several ways: Her hours, her kitchen capacity, and her space.

Kayla built the relatively Taj Mahal-proportioned new building at 860 Grand Caillou Road, and is justly proud.†She can now (since late November, 2006) serve customers in-house and in their cars via a drive-through.

The new building is no Taj Mahal in its appointments, however.

Appropriate to its casual fare, the surroundings are both spartan and funky. The light brown metal exterior also surprisingly doubles as the interior surface. Several metal tables and chairs seat about 30. The floor is an appealing, functional stained cement that looks like a dark brown, patterned tile.

We went at late at night when the crowd was sparse, but I imagine it gets pretty noisy with a lunchtime crowd.

The menu holds no surprises, as the sandwich is the thing. The usual suspects are available: roast beef (plain and barbecue), ham, sausage and burgers on the meat side, with shrimp, oyster, fish and crab on the seafood ledger. (There are items listed as “veal cutlet” and “chicken”, but these are abominations upon the land and will be ignored, unless someone tries them and absolutely insists I do too).

There are corresponding “platters” of veal and chicken and all of the seafood items. Be advised that you can get your sandwich on optional wheat bread, a sop to the health-conscious who otherwise have to take a holiday when dining here.

Well, maybe the salads might also qualify, as boiled shrimp and grilled chicken can be had as toppings.

We took no such liberties. Why would you, unless you’ve been dragged here by someone? No, straight to the gold standards n roast beef and shrimp (and/or oyster, to be sure).

The roast beef is quite possibly the sloppiest I’ve ever had. The bread was totally routed, as a storm surge of gravy overwhelmed it. I wound up happily shoving hunks of meat with only the ghostly remnants of bread in whatever ways I could to avoid droppage.†No matter, as the taste of slow-cooked roast in its own natural juices enhanced with gravy banishes any neatness issues.

And the taste is no accident.

Ms. Burton cooks 100 pounds of roast beef every morning, slow and seasoned. The drippings are the start of the formidable finished gravy, which benefits from her “secret recipe” of other ingredients. So popular has the gravy become that it’s slathered on fries and offered as a separate menu item.

A digression: The bread here is fine, and it benefits greatly from being toasted. But why does any restaurant, much less those that feature po-boys in a starring role, use anything but the platonic perfection that is New Orleans’ Leidenheimer’s? You can still consider it local, and its Web site says it delivers to Houma, so what gives?

Back to what is available. The shrimp version was also a hit. They tasted freshly caught and were fried in near-greaseless golden batter that would be the pride of any home cookout. Medium-sized and plentiful, the shrimp were the divas of a bravura performance.

But they were upstaged by the oysters.

These flavor-bombs had a decadent butteriness that brought out the “Oohs” and “Ahhs” in our group. Fried in a corn-meal batter, they were almost too good to swallow.†We won’t know if they’ll be as good once the season’s past, so hurry if you want to take no chances.

The sausage po-boy featured a unique twist: the sausage was thinly-sliced instead of just dropped on the bread. This made for much easier eating, and attests to the care taken and the attention given here.

We tried the seafood platter on a return trip. Lusting openly for the oysters, we saved them for last. We ate our way through very respectable and meat-dominated crab and crawfish cakes, the latter being our favorite by a claw. The shrimp and oysters were outstanding solo, and a judicious dab of tartar sauce was all that was occasionally needed. Fries and onion rings were superfluous.

The service is self-styled, but there’s help around if you need it.

Kayla Burton and her place have come a long way since the modest beginnings. She thinks of adding plate lunches, if the current lunch rush would allow her the time to plan and execute it. But that’s a welcome problem indeed.

Service: Not applicable (but the people are super-friendly!)†