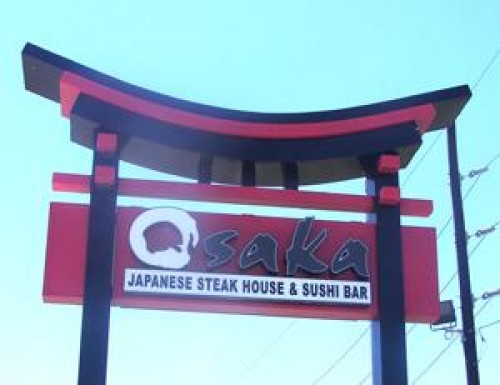 The city of Osaka is also traditionally considered to be Japan’s “nation’s kitchen,” if Wikipedia is to be believed (as it probably should, its error rate is only slightly higher than Britannica’s). The same source also quotes the somewhat puzzling saying “Dress (in kimonos) ‘til you drop in Kyoto, eat ‘til you drop, in Osaka” n but the general idea isn’t lost in translation. And Osaka (the restaurant) stays true to its namesake by faithfully adhering to its Japanese-only menu and its refusal to dumb-down or homogenize its offerings.

Osaka sits on Martin Luther King Boulevard in front of the LaQuinta Motel, causing a jarring sort of ethnic juxtaposition. Like its Italian rival down the street, Olive Garden, Osaka quickly and effectively creates its own oasis of foreignness. A sort of moat covers the front of the building, with two bridges allowing access. The two bridges have corresponding and somewhat different rock formations flanking them, with running waterfalls. I looked for, but did not see, large Japanese goldfish.

But the exterior of Osaka’s does not prepare you for what’s inside. It’s stunning.

Dark wood dominates on the walls and trimmings, and lean and elegant accents are everywhere. The light is muted but still generous and the layout is asymmetrically interesting. The bar is offset by being elevated and well-appointed. A mixture of tables and booths make up the main dining area, which is spacious and still intimate.

I don’t want to say this, but I will n Houma needs a place as good-looking as this.

The menu reeks of authenticity. The only concession to American or local taste is the aptly named Houma roll (more about that later). Everything else, I do believe, could be found on a menu in a restaurant actually located in this place’s namesake. Appetizers, soups, sushi, sashimi, rolls, and various dinner combinations make out an extensive and well-balanced array of choices.

The sushi and sashimi were all top-quality and therefore fresh. Connoisseurs or even casual fans of raw fish and seafood won’t be disappointed. The tuna in particular tasted freshly caught, as if could have come from the moat in front.

We tried more appetizers n “Ebi Shumai” (deep-fried dumplings) consists of one or two bite-sized nuggets of chopped shrimp with breading, onions and other seasoning. They recalled, but did not imitate, our local shrimp en Brochette. This dish, however, is much lighter, being tempura-fried rather than our version’s flour batter and vegetable oil.

We also tried the “Kimpira-Gobo,” which is described as sautÈed burdock roots.

What is burdock? Still don’t know, but this dish was delicious. The roots resembled green fettuccini-shaped pasta that came still crunchy with a winning sesame soy sauce and no small amount of pepper. They were served on the cool side of room temperature and did what an appetizer is supposed to do n pique rather than satisfy your hunger.

We also tried the Clam Miso soup. The stock struck the right balance of lightness and substance, and the mushrooms and scallions provided needed accents. The clams, however, were either shrunk to microscopic size or had fallen out of the three or four shells lurking of the bottom of the bowl.

But don’t get me wrong n the soup was suffused with clam flavor and it was a dish to recommend.

We also tried Gyzoa soup. When we bit into the dumpling, it featured pork with the usual mushrooms and scallions. The pork dumpling was the star of this dish, as it released well-seasoned pork inside of the dumpling shell.

We tried the aforesaid “Houma Rolls,” as well as the Far East Roll. Of course, these types of rolls are only as good as the ingredients, and they were all top-notch.

The Houma Roll, unfortunately, came with a cream cheese insert, and this addition seemed to flatten out the overall taste. Others n like cream cheese lovers n might disagree.

Entrees we tried included the Tempura & Shrimp Teriyaki combination. You get two large fried shrimp and a handful of tempura fried vegetables (carrots, onions and zucchini) and the main portion of grilled teriyaki-doused shrimp with accompanying sautÈed onions and Japanese vegetables. The tempura was suitably light and rather lightly seasoned (more than a pinch of salt was needed) and the shrimp teriyaki was satisfying if unspectacular.

We also tried the Beef Teriyaki. This featured grilled beef cubes with a semi-sweet teriyaki sauce. It was served with vegetables over rice along with two pork dumplings and a side of fresh fruit, strawberries primarily. The sauce was very well balanced, as it had generous hints of garlic and sesame enhanced by a slight sweetness.

Again, more than a pinch of salt was needed to bring out the full flavor of the dish, but that of course is better than over-salting.

Lastly, we tried the “Donburi,” a traditional Japanese dish served over a bowl of rice. Specifically, we tried the Katsu-don, which featured breaded pork over rice, with sautÈed vegetables and egg.

Once salted, the dish proved to be our favorite yet. Hints of curry and garlic could be detected. It seemed to have the most-rounded flavor or any dish we tried, and would be a perfect comfort food if I may haul out an overused phrase.

The service was full and excellent. Our waiters were very helpful in deciphering the bi-lingual yet still mystifying menu. The food came out in a very prompt and well-presented manner. And don’t try to take your bill up to the counter (as in most Houma restaurants), because as I said before this is a full-service restaurant.

Osaka’s pricing is a bit on the high side, but the Edamame appetizer, which had been breathlessly quoted to cost $9.95 had been marked down to a more appropriate $5.95.

Everything else was about what one would expect at a restaurant that looks as good and acts as well as this one. Also, the restaurant has only been open a few months n not even long enough to secure its liquor license. Sake and Japanese beer lovers will have to wait a bit longer before slaking their thirsts.

Osaka is locally owned and has bravely decided to take on the major chains on their own turf. With a bit more seasoning and maturation that will no doubt come once the restaurant finds its legs, Osaka has a very good chance of doing that.