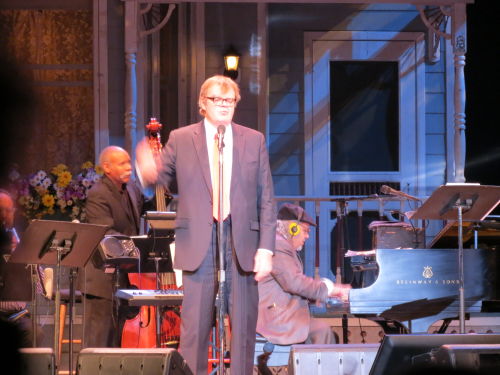 I don’t specifically remember when I first heard Garrison Keillor’s velvet voice, emanating from radios in my automobiles, through headsets plugged into my ears, or on the refrigerator tops or bookshelves of apartments and houses I have occupied in seven states and nearly twice as many cities.

What I do recall is that whenever I first heard the often corny and always entertaining Saturday evening production of “A Prairie Home Companion,” a show that airs at 5 p.m. local time on WWNO, the New Orleans public radio station that is found at the 90.5 and 89.9 dial settings here, I was hooked.

Those familiar with the show need no introduction. For anyone not knowledgeable, PHC is a throw-back to the old days when people actually sat around a radio for their entertainment, allowing their imaginations to fill in the visual blanks, easily able to suspend disbelief and accept a talented sound man’s presentation of halved coconut shells as galloping horse hooves or the use of multiple voices from a handful of actors to represent a cast much larger than was gathered at the microphones.

And so it was with great joy that I accepted the assignment of actually attending a live Prairie Home Companion broadcast Oct. 12, at the reborn and renovated Saenger Theater in New Orleans.

It wouldn’t be the first time I had seen Garrison Keillor, the author and front-porch philosopher who is the show’s creator and host, spinning yarns, the adventures of imaginary characters in an ensemble setting and other features familiar to listeners of the program in living color.

The 2006 Robert Altman film of the same name accomplished that task, albeit in a fictional setting with a fictitious plot and, unfortunately for me, replete with the ADHD texture of the director’s high-energy, often madcap accomplishments.

A Prairie Home Companion’s true energy, for me, is found in its regularity and predictability, which is great for regular radio but not so good for film.

Excitement regarding the outing to the Saenger on Oct. 12 was rooted in the understanding that I would see the show in its natural environment, before a live audience of people who applaud when some chestnut of an eternally staged skit is presented, as they do in various locations nationwide when the show is on the road, removed from its home base of the old Fitzgerald Theater in St. Paul, Minn.

I often note to people that my employers keep me on the payroll because of my abilities to tell stories in print, not because any ability to talk. Keillor’s talent lies in his abilities as an oral story-teller, a weaver of monologues that begin at point “A,” round the corners of points “B,” “C” and “X” to a point where you don’t remember “A,” only to be joyously reunited with it at the close, which somehow allows the whole experience to make sense, and leaves you with a warm feeling inside.

The show, as presented to the live audience, has a sparse set that consists of a wood-frame house façade, painted pale blue, a reminder that all you are seeing is taking place on a simple front porch.

The band is seated forward of that, closer to the audience, and Keillor himself commands attention when he lumbers onto center-stage.

Part of the experience was made more pleasurable by the venue. The Saenger is an incredibly designed structure on the inside, with marble walls and great chandeliers, with an auditorium graced by lavishly designed upper boxes and a faux night sky ceiling, giving the impression that whatever is to be seen is worth whatever expense is incurred because the setting is that grand. It represents the difference between the great design detail of New York’s Carnegie Hall, as opposed to the austere surroundings of that city’s Lincoln Center, or the Kennedy Center in Washington, D.C.

You are there not to see a show, but to witness an event. A presence of the muses is not difficult to imagine.

So yes, there was Garrison Keillor, and the applause of hands that had for weeks, months and years past found the dial setting on Saturday nights wherever they were, so obviously familiar with the show’s twists and turns.

Of particular interest to me was how sound effects master Fred Newman makes radio magic, no less magical when the curtain reveals his ability to use objects for audio, as well as the projection of various voices.

There were two disappointing aspects of the show. A regular feature, “The Lives of The Cowboys,” was not included in the New Orleans broadcast. And although PHC has used New Orleans musical guests in the past, those who performed – folk artist Iris Dement, songstress Hilary Davis and powerhouse vocal performer Jearlyn Steele – are not home grown.

Nonetheless, seeing a show in the past only imagined in the mind with one’s two eyes was a fulfilling experience, and feeling the energy emanating from the stage was worth the trip.

The greatest gift from seeing the show live, however, came in the following Saturdays, at 5 p.m. in my very own home. Listening to further broadcasts of PHC, aired from other venues, became not less magical because the veil of imagination had been lifted, but even more so.

Seeing rather than just hearing the man behind the curtain enhanced my future auditing of the weekly broadcasts and likely will for many years to come.

And while there was no opportunity to interface with Keillor – though that would have been nice – there was a benefit from that mild disappointment.

They say that if you really admire someone you should never interview them, because doing so can severely erode the edge off of the admiration. With Keillor’s right schedule in New Orleans and resulting media inaccessibility there was no danger of that. And for that, in the long run, I now find myself grateful because the magic was even further preserved.

Garrison Keillor entralls fans gathered at the Saenger Theater for the live New Orleans broadcast of “A Prairie Home Companion.”