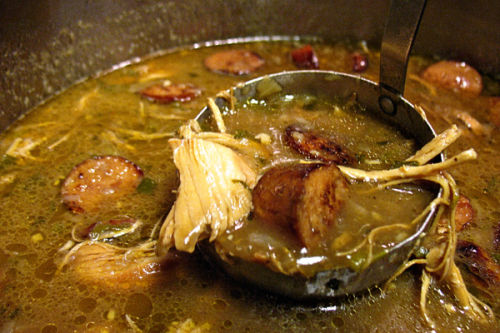 It’s all about the gumbo, even when it’s not.

Both popular varieties – seafood and chicken and sausage – are served in mass quantities, but as its popularity attests, the Louisiana Gumbo Festival of Chackbay has more substance in its roux.

“We offer live entertainment, amusement rides, an auction, parade and then a host of food,” festival spokesman Josh Falgoust said.

In addition to gumbo, other local cuisine such as sauce picante, beignets, fried fish, crawfish balls and typical fair food are served.

The country music band Shenandoah, who won a Grammy Award for their 1994 hit “Somewhere in the Vicinity of the Heart” is the festival’s top music draw. The Muscle Shoals, Ala., group’s sound is accented by bluegrass.

The festival averages 16-18,000 guests, according to Falgoust, and is one of two Louisiana festivals (French Quarter Fest) to earn the American Bus Association’s 2013 top-100 event in North America designation.

What started as a one-day fair and blossomed into a three-day festival continues to expand its offerings: Tiger Rock Martial Arts is on hand to offer a TaeKwonDo demonstration.

This is in addition to the 5K race, amusement rides, live auction and firemen’s parade that have become the festival’s mainstays.

In addition to Shenandoah, Ruff N Ready, Good Feelings, Warren Storm and Chubby Carrier are among the performers headlining the list of nine bands scheduled to perform.

The festival is open from 6 p.m. to midnight Friday, noon to midnight Saturday and 10 a.m. to 7 p.m. on Sunday.

The Louisiana Gumbo Festival of Chackbay runs from Oct. 11-13.