Touring past lives on Grand Isle 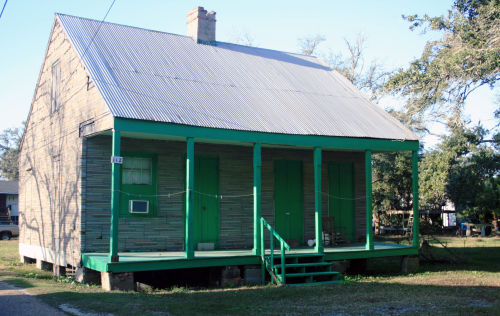 Way down south, near the Gulf of Mexico, lies one reason why Louisiana is called the “Sportsman’s Paradise.” Grand Isle is a popular destination for boating and other water-based recreation, but visitors may not know the history behind the state’s only inhabited barrier island.

During a cultural celebration each April, guides lead residents and tourists to various historic homes on the island. Since this summer, the Grand Isle Visitors Center has also offered self-guided tours. As of Oct. 10, only about a dozen people had taken self-guided tours, but Cathy Funk of the Visitors Center said the guided tours are popular during the Cultural Weekend. She said the historic homes help show people that Grand Isle has more to offer than they may think.

“A lot of people don’t know they’re there,” she said, adding that many just visit their camps and don’t drive around the island’s back streets. “You come in on Friday night; you go to the Sureway (Supermarket); you go fish; you go home.”

Most of the homes on the tour were built in the 19th century. Though they are not open to the public, guests still learn a lot from viewing them and listening to an audio tour.

The first home on the tour belonged to Ethel Chighizola. According to the audio tour, she and her siblings often played outside and could tell when it was suppertime by the chimney’s shadow. The house’s bright green features are eye-catching. Two rockers and a chair sit on the porch, along with a plate of food for the black cat that hangs around. In contrast to the partially broken chimney and peeling paint, evidence of the home’s age, is a DirecTV satellite dish in the front yard.

Neighbors often gathered at the DeMolle House for afternoon coffee. Behind a little picket fence and nestled between trees, the house built in the late 1800s still shows signs of life, with a hammock hanging near the shed and butterflies fluttering around the rose bush. A replica boat steering wheel hangs on the front door, which leads to a screened-in porch, where one can imagine the home’s first inhabitants relaxing with their coffee.

The third stop on the tour was only partly a home. A Chevrolet van is parked in front of the Old Ludwig Store, and a rusted gate leans against the building. Windows are boarded. In the back, where the Ludwig family lived, a door is open and the floor is caving in on the second story. The original owner and her husband also ran a small hotel behind the store. The building was eventually sold but remained a grocery store until the 1980s.

On the next street is the Adam-Minnich House. It belonged to a family with a son and a daughter, both mentally disabled. Although the boy was allowed to play outdoors, the parents kept the daughter inside to protect her. According to the audio tour, neighborhood children mistook her for a ghost, as she was pale and wore white clothes. Today, the white and green home with an awning and a porch swing looks much more welcoming than a haunted house.

The Robbin House is unmistakable; a sign featuring a robin and its nest hangs on the side of the home. The building actually contains two homes; the original owner’s son joined his house with his mother’s after a hurricane washed it down the lane.

Moss hangs from the trees at the eighth stop, the Kirby-Adam House, adding to its old-fashioned appearance. In front of the home is a picket fence, which the audio tour says was built to keep out cattle. Three white wicker chairs sit on the porch, which also includes ceiling fans and a hanging lantern.

As soon as a smell is noticed at Caillot Villa, the audio tour explains that bagasse was used in building the walls. A pair of horns decorates the front of the house. Scattered on the porch floor are a bench, an old white chair, a ladder, a broken green chair, a blue and white cow-shaped creamer and sawdust – items that might otherwise be called “junk” but are evidence of the home’s history. As visitors listen to the audio tour, they may wonder what other stories this old house holds.

Tenth on the tour, the Poche House is undeniably more contemporary than the other the historic homes, having been renovated in 2006. Elevated to prevent flooding, its yellow siding and red shutters and roof make it look like a home found on the beach. Stepping stones guide guests to the side of the house, where a deck can be found. It may not be the typical Cajun or Creole cottage, but the home played a role in history, serving as a place to celebrate Mass after the local Catholic church was destroyed in 1893.

The Barthelmey House is well-suited for the “Sportsman’s Paradise.” A flag featuring a parrot proclaims, “It’s 5 o’clock somewhere.” Two sets of wooden stumps wrapped in nets hold replica pelicans and fish. Under the carport is a boat, and on the shed in front of the house hangs a poster that says, “Blood, Sweat and Beers.”

Also included on the tour are the Crosby House – which one could almost miss since it’s set deep on the lot – and the St. Aubin-Rigaud House, whose wind chimes, hanging plants and latticework porch give it a pleasant country appearance. The Thayer-Hogan House and the home once belonging to former Grand Isle Mayor Andy Valence complete the tour.

Funk said the Visitors Center has been researching for a new project to promote the historic home tours.

“We’ve actually been working on trying to plan a cookbook around the old houses,” she said. “Picture of the house, the history of the house … We were trying to find a recipe from every house. Start with maybe one, just desserts, and then the second one could be meats, vegetables or seafood.”

She said she remembers Ethel Chighizola’s bread pudding and would like to get the recipe for the cookbook.

Ethel Chighizola grew up in this house during a past era in Grand Isle. Chighizola and her siblings frequently played outside, and it was smoke billowing from the chimney that beckoned them home for supper.

The DeMolle House, a gathering spot for neighbors in its heyday, is pictured.