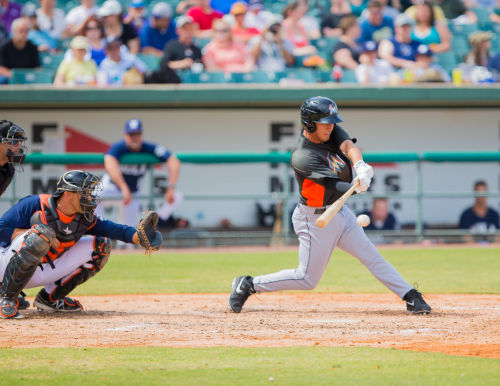 The New Orleans Zephyrs are grinding forward toward a spot in the postseason. Now with more than 15 seasons in in Big Easy, the Miami Marlins’ farmhand offers professional baseball and quality family fun at affordable prices.

“Every baseball player wants to play in the big leagues,” New Orleans Zephyrs manager Ron Hassey said. “But over here, it’s Triple-A. Our players have to perform. This gives our organization’s younger players and experienced players a chance to perform to get to the big leagues. … It’s exciting. It always is.”

For the baseball purist, the Z’s are a treat.

Because of the Miami Marlins’ current state of limbo and rebuilding, the Zephyrs will probably see most of their top prospects roll through New Orleans this summer.

A total of six of the Marlins’ top 10 prospects are currently in AA-ball (one tier before the Zephyrs’ level).

Tomorrow’s stars like prized outfielders Christian Yelich and Marcell Ozuna join catcher J.T. Realmuto and left-handed pitcher Adam Conley as some of the organization’s most prized prospects that are one step away from being called up to New Orleans.

“You hit it right on the nose,” Hassey said. “We have a lot of young players who don’t quite have the experience yet that you’d like to have in the majors. But that’s why our Triple-A ball club was built the way that it is. We have a lot of guys with Major League experience and a lot of guys with aspirations of going there and staying there. They’re here for one reason. To win here and to also go up to the major league level if anything goes wrong up there with them.”

In addition to Miami’s top prospects, the Zephyrs also see a revolving door of other elite stars around the world of baseball.

Former Chicago Cubs star Kerry Wood faced the Zephyrs both as a young farmhand and as a veteran rehabbing from injury.

He is one of many household baseball names to face the local professional team.

“There is a land of opportunity here for these guys,” Hassey said. “And they know it. Their job right now is to just to as good a job as they can down here, because if something happens in Miami, our guys are the ones who will be called up.”

But away from the ins and outs of baseball, the Zephyrs are also an all-around source of pure family entertainment.

The ballgame is one thing – there’s three hours of baseball in every outing.

But in addition to the game, the Zephyrs host nightly promotions to pack fun into every stay.

Every Wednesday at the Shrine is dubbed Web Wednesday. During hump day home games, fans who follow the team on Twitter and Facebook will receive an exclusive offer for the game.

One day later marks the well-known Thirsty Thursday promotion. Around for several seasons, fans can get $1 sodas and $2 cans of beer throughout the duration of the ballgame.

And then, of course, there are the fireworks.

After every Friday night home game, the Zephyrs host a free fireworks show – lighting the night sky in bright colors.

This month’s fireworks shows will have some extra flavor.

On Friday, May 10, it’s Superhero Night at the ballpark. Every fan who enters the gate dressed as a superhero will get in for half off.

On May 31, firework fans will have another opportunity to see the ballgame and fireworks show at a discounted price.

That night marks the Zephyrs’ Pink in the Park promotion.

Anyone who enters the park wearing pink on that night will receive a discounted ticket. Throughout the night, portions of proceeds will go to benefit the Mary Kay Foundation’s cancer research.

The Zephyrs play a total of 18 home games in the month of May.

The best chances to see the team are during separate home stands that last from May 7-14 and then May 24-31.

Baseball America’s No. 1 minor league prospect, Texas Rangers shortstop Jurickson Profar will be in town from May 28-31 with the Round Rock Express.

If he’s not called up to the big leagues before then, of course.