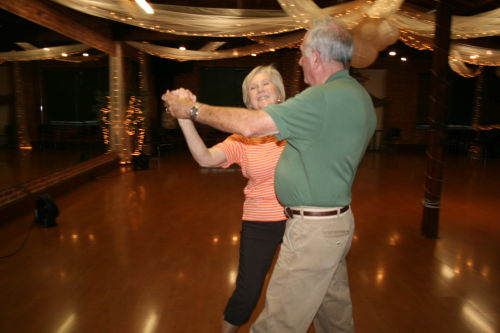 Many have long heard of the benefits of exercise, but to walk into a gym or weight room can be a daunting task. Without encouragement or enjoyment, motivation can wane and lead to disappointment, never finding the right avenue of exercise.

But imagine walking into a room of familiar faces, all smiling accompanied by warm welcomes; it’s a social gathering, yet provides great aerobic exercise without the desire to sigh or complain. It may seem like a fleeting thought or far off dream, but is very much present in Houma and Thibodaux at prices that compare or compete with your neighborhood gym.

Dance has long stood the test of time, holding within its reaches traditions, nostalgia, fond memories, and the formation of friendships. It doesn’t (typically) require equipment, weights, or possess any age limit. Dance is something that is inherently done today and has been throughout time.

One place to laugh and dance with friends is Studio 371 in downtown Houma. Thanks to Jim Steven and Ann Durocher, the city is slowly being introduced to the art of ballroom dancing. After they were married and the couple moved to Houma from Metairie in 2004, they quickly discovered that there were not any studios that offered ballroom dancing, a sport that introduced them to each other.

“I was an avid dancer in Metairie and was very involved in the dance community there,” Durocher said. “When I got to Houma and realized there wasn’t even a ballroom dance studio, I approached several of the kid studio owners and asked if they would consider having ballroom dance classes as part of their curriculum.”

Lenar Whitney was the first to respond, and the group started group dance classes right before Hurricane Katrina crashed into Louisiana. When classes finally resumed, the partners were quickly informed of another problem – there were too many people coming to the classes. With the shortage of space, they began looking for a studio.

The search ended at 371 School St., where they discovered an office building (transformed from an old Ford dealership) with excellent space and floors. From the outside, it’s not something that would be expected, but walking inside and up the stairs reveals a beautiful, spacious area, nicely equipped for dancing and the occasional party or wedding reception.

“We couldn’t have asked for a better place,” Steven said. “I just love this place.”

The studio schedule changes from month to month, typically hosting group ballroom dancing lessons two days of the week along with line dancing and private lessons. The group lessons feature dances of many kinds: swing, tango, foxtrot and bolero to name a few.

The couple keeps the studio going for the love of dance, claiming to break even from month to month in regard to finances. Although retired, Durocher keeps herself very busy as the organizer of the Gumbo Dancesport Championships event in Baton Rouge, a nationally qualifying event for USA Dance.

With grandchildren of their own, the two desire to share their love of dance to children in addition to the adults of Houma and the surrounding areas.

“We are trying to get more kids involved,” Durocher said. “The objective here is to use dance to help kids become more social; improve their social skills. We are working with a lady in Lake Charles who has a Dancing Classrooms program. If we can be successful over the next school year, we’ll try to implement that program in one or two of the schools here.”

“This is something that is working in Lake Charles and we have several schools in Baton Rouge with the program,” Durocher said. “Those kids come to our competition, from the inner-city schools and they interact with very sophisticated people, and very well. The vision here is to bring dance and the benefits of dance to another generation.”

Not only does dance hold traditions across the world, but close to home in south Louisiana, the annual Louisiana Swamp Stomp Festival is working to keep the stories alive through their monthly Cajun and zydeco dance lessons. Free to Nicholls students, faculty, staff and guests, the lessons introduce the Cajun culture to students from other areas and of varying ages. The next event featuring free dance lessons will take place Oct. 30 from 6-7 p.m. in the Nicholls Union Ballroom, preceding a live music performance.

For Studio 371, the place opens up a wide array of opportunities for meeting new people and building a more diverse and fulfilling social life in Houma. Monthly dance parties, wine tastings, Latin dances and Latin bands, as well as a USA Dance dance party only scratch the surface of the benefits of partaking in dance.

“It’s a social and athletic activity,” said Durocher. “Combine that and it’s something that a couple can do for the rest of their lives together. Instead of your social world shrinking, it stays large. Not only is it good physically but it’s been proven that it is excellent for memory and helps mentally.”

The classes are $10 per person per class and can be paid monthly or at each class. For a schedule and more information on Studio 371, visit their website www.studio-371.com.

Jim Stevens dances with Ann Durocher. Durocher and Steven, who moved to Houma nearly 10 years ago, founded Studio 371 in downtown Houma after realizing their new hometown had few ballroom dancing options. They plan to spearhead a Dancing Classrooms program to install in local schools within the next couple of years.

Tracy Lawrence knows who his fans are