Arriving to Mid-City by boat to do the Boogaloo 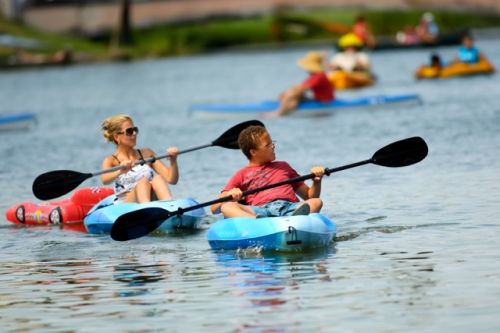 What began as a one-day event to help restore a broken city and promote local artists has blossomed into a free weekend celebration of New Orleans culture and the strides the city has made since the summer of 2005.

The Mid-City Bayou Boogaloo Festival is a unique event located on Bayou St. John, providing an authentic New Orleans experience for natives and visitors alike. From May 17-19, festivalgoers can enjoy a plethora of activities, food and music from three different stages. The event, hosted by the Mothership Foundation, began as a small project after Hurricane Katrina with big hopes of contributing to the restoration of the damaged city.

“I wanted to go back home and use the location [Bayou St. John] for a free music festival, assuming we could pay for festival, and use the money left over for community projects,” says Mothership Foundation Founder, Jared Zeller.

When Katrina hit New Orleans Zeller evacuated to New York, where he began the steps to create his dream. Before the storm, he enjoyed promoting local artists as a hobby and saw the festival as a way to take it to another level of exposure for local artists, creating a musical celebration of the city he loved.

“I didn’t have clue what I was doing other than a dream,” Zeller says. “I came back to New Orleans in October and what was so great about that time was that the residents were coming back. People with the resources to do so were dedicated to coming back.”

It began with a T-shirt that read “Refugee.” Zeller used the shirts as a way to raise funds for the first festival in 2006. His Mid-City neighborhood supported his idea and soon formed the committee that helped organize the event.

“It was a one-day event,” he says. “We had about 10 bands, one stage, a couple of artists and a few vendors; 6,000 people showed up. I think I knew that year that it was a pretty unique and special location and event. Here we are eight years later and we’ve grown to three days, three stages, 80 artists, 30 food vendors and other special events within the festival.”

Zeller founded Mothership Foundation in 2005 with a mission to improve the quality of life for New Orleans and Louisiana residents through promotion of arts, culture and recreation. The Bayou Boogaloo festival is their fundraising event of the year, and they use the funds to give back to the community through rebuilding, beautification or community projects. Last year the proceeds were used to replace five 200-gallon southern live oak trees located on festival grounds that were lost during hurricanes Katrina and Isaac.

“These were just a few things tugging at me at the time,” Zeller says. “I wanted to restore the social life, promote local art and culture, and the recreation part was somewhat selfish with seeing obesity stats – people need to get outside and do stuff.”

People are encouraged to bike or share rides to the event. Even kayaking or canoeing can serve as a possible mode of transportation through its location on the bayou. Bikers on Saturday are encouraged to participate in the Bicycle Second Line hosted by Bike Easy starting that morning at 11 a.m. The event is a biking route where its participants create a parade in the streets, being led be a band in the front, and another at the end.

“We’ve been doing the second line since 2009,” says Jamie Wine, executive director of Bike Easy. “In 2010 I called Jared and said ‘We did this last year without you on same day, let’s do it together next year.’ The two events really go hand in hand.”

The event is a family friendly one, with a slow pace. Bikers travel eight miles looping at Lafitte Street, winding through the Central Business District and back to the festival grounds. Last year the ride saw upwards of 500 participants; this year organizers are expecting the numbers to rise.

The festival also features a rubber duck derby hosted by Second Harvest Food Bank, where participants have a chance to win up to $5,000 if their adopted duck is the winner. A 5K run hosted by Zulu will take place Saturday morning.

The festival is a New Orleans and Louisiana cultural celebration, taking place on a historic locating that Zeller says is like no other.

“The festival is on an urban bayou,” Zeller says. “Show me a place where there’s a bayou through a large city. We think it is pretty unique. It has history; Bayou St. John was a reason why European settlers came here, they used the bayou for transport because they didn’t have to deal with currents. It’s the only festival you can come by canoe or kayak. People make their own flotation devices – party barges.”

Those who have ever seen Marlin Miller’s tree carvings on the Mississippi gulf coast can also enjoy his work at the festival. After coordinating with Zeller, Miller plans to carve trees, on the grounds, that were killed during Hurricane Isaac.

The event is centered on the community, featuring local musicians, artists, food vendors and even promoting sustainability by using solar panels for energy. The proceeds are put directly back into the city through various projects and propose a great reason to attend.

The festival runs from May 17-19. Admission is free. For more information on specific event times, visit the festival’s website, www.thebayouboogaloo.com.

The Bayou Boogaloo Festival is structured around Bayou St. John, which is used as means of arrival for some festivalgoers, a place to enjoy the festivities on party barges for others and the site of the lottery-like rubber duck race for which the festival is famous.