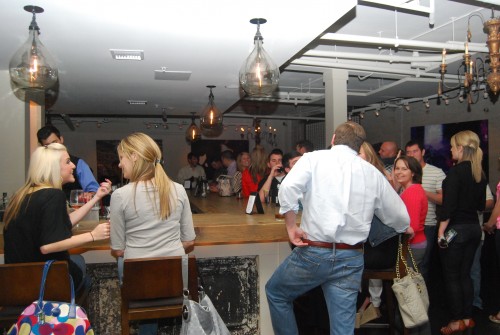 In a period when late-night drinking often connotes sloppy dancing, loud music and binge behavior, it can be refreshing to discover an establishment that runs decisively against the norm.

Bar Roussell, Downtown Houma’s newest nightspot, accomplishes this with ease and self-consciousness, differentiating itself from neighboring bars in almost every facet of night life.

There’s no televisions or ashtrays, for starters, but the establishment’s core is comprised of many other inclusions – and exclusions – that minimize noise and put the focus on the patrons.

Wine glasses populate the bar top, which juts out like a peninsula into the lounge. Three bartenders fulfill the orders, a majority of which come from the dozens of people sitting in high-legged, low-backed stools around the establishment’s centerpiece. A cocktail waitress matriculates through the standing crowd and visits those seated in the room’s lounge, a popular collection of couches and chairs.

The establishment yields to socializing and networking. Chandeliers and lamps emanate a subtle light, bright enough to see one another while maintaining taproom-appropriate dimness. Pop music is piped in at a low hum, serving as an ancillary aspect rather than a focal point.

In what’s ultimately a demonstration of restraint and reliance on its patrons, bar management emphasizes people and personal connections instead of its own gimmicks. It’s a social harbor, not a prodder.

One of the strongest critiques of Bar Roussell, according to manager Matt Bolotte, 34, is the lack of live music. The club made its first stride in this arena late last month when it brought in the New Orleans Treblemakers.

Bolotte says that more live entertainment – including deejays – is in the works, and it’s something he and owner Norby Chabert, a state senator, hope to provide once every six to eight weeks.

Bar Roussell blends the modern with antiquity. Exposed pipes snake across the bar’s ceiling and speak to the building’s history, while contemporary art and furniture decorate and rest against the walls.

The bar is cut out of a building that was originally constructed as a 20,000-square-foot department store in 1906. It would later house Houma City Court. Now known as 7887 Main, the building is located at the corner of Roussell and Main streets, adjacent to Bayou Terrebonne.

The tin tiles that once served as the department store’s ceiling are incorporated into the bar’s façade, and the bar top is the wood that served as the original building’s rafters. The subtle, quaint references to a prior time are elements that complement – not dominate – the larger picture.

“Our goal for Houma is to elevate Houma,” Bolotte says. “I don’t mean that to be derogatory. We’re here to fill a niche, just like the Brick House, The Boxer and The Barrel and even the City Club.”

The customer base is diverse, by race and by age. It’s a mature crowd, one that flocks to three distinct areas to converse: the bar, the lounge and a middle standing ground. Many introductions here include a job title.

Patrons refer to the bar’s ambiance, top-shelf spirits, lack of a cover charge, the unique absence of secondhand smoke and each other as reasons behind their continued business.

“It’s classy, the wine list is great and there’s no cover charge,” says Jennifer Naquin, 23, who adds that Bar Roussell is one of a few nightclubs in Houma where she’ll spend her free time.

“I like that there’s no smoking, and it’s a clean environment,” says Adam Tjelmeland, 28, an Iowa native who relocated to Houma for work. “They’re good people here, you know?”

Smokers are free to step outside on a patio overlooking the bayou and light up. Inside, the absence of smoke is equaled with an absence of food, another perk some of the patrons referenced: Although south Louisiana cuisine often carries a pleasant smell, it’s nice to remove yet another distraction from the high-quality establishment.

Bolotte has worked in bar management and marketing for years, and the New Orleans native was influential in opening a bar in Uptown New Orleans.

The young but experienced bar manager says Bar Roussell’s vibe compares favorably with clubs in the Big Easy, without the day-to-day bustle and social exclusivity of high-end city bars.

“When it’s busy, the energy builds upon itself,” Bolotte says. “It’s almost exponential.”

Bar Roussell sheds light on its patrons and turns down the music to better facilitate forged connections between its customers. Bar management plans to add more live music to the calendar, possibly one band or deejay every six to eight weeks.