Busy as usual at Bayouland YMCA 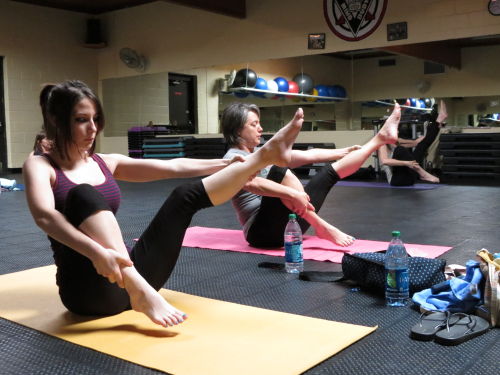 “I just moved to Houma, and I was looking for something for my children to do during the summer,” said Jaklin Malki as she was escorted through a facility tour. “I didn’t know they had things for adults to do too, so I signed up as well. I’ll also bring my children here to swim, and I’ll come to the Zumba classes.”

Membership has quadrupled over the past eight years, Falgout said, to more than 6,000. Each member utilizes the facility for different reasons.

Houma resident Murray Morella takes advantage of the covered pool to train for triathlons. “I swim 45 minutes three days a week,” he said.

Nationally, the YMCA is in more than 10,000 neighborhoods. The organization’s creed is to strengthen communities through involvement. Bayouland describes its mission as improving the spirit, mind and body with programs based on Christian principles.

More than 300 children are enrolled in the ongoing summer camp, which is at capacity, Falgout said. They begin and conclude each day with assemblies, bookending a day of outdoor activities, swimming, arts and crafts, a weekly field trip and other fun-centric activities.

Bayouland YMCA won a $10,000 grant to feed all of its campers breakfast. The center is also using grant money to remodel its kitchen.

“We serve breakfast to all of our children free of charge,” Falgout said. “We’ve noticed in the last two years that it helps tremendously with their temperaments, their attitudes.”

Because the gym is used throughout summer camp, it is closed to the general public until after the camp concludes.

Falgout has been Bayouland’s executive director for nearly eight years. She said the facility is in a better place now than it was when she took over, despite the $1.4 million in damage wrought by hurricanes Gustav and Ike.

“We definitely turned a bad situation and made it good,” Falgout said of the hurricane damage. “We were able to do a lot of things and from the facelift, we were able to bring in new members.”

Bayouland tracks its membership based on units, which can encompass one person or whole families. She said there are 2,700 units at the moment, up from 800 eight years ago.

Falgout said the Y is using the increased revenue to enhance the facility, such as a new steam room recently installed in the men’s locker room.

“After the summer is done, we’ll convert the ladies into a steam room,” Falgout said.

In the festival’s stead are shrimp boils. For $10, one pound of boiled shrimp is served along with potatoes and a dipping sauce. The next boil is scheduled for June 28.

“Quite frankly, we can do two or three shrimp boils a year and make the same money without seven months of prep,” Falgout said. “It takes away so much time. Whereas this is a week of prep. … Now, it seems like everybody is trying to do a fair and festival, and you just can’t have that many in a town.

“We use extra fundraising dollars for (camper) scholarships.”

Allyse and Carlin Martin participate in a Pilates class at Bayouland YMCA.

Participants in the YMCA Aqua Lite program, which helps with arthritis, work out in the Bayouland pool.