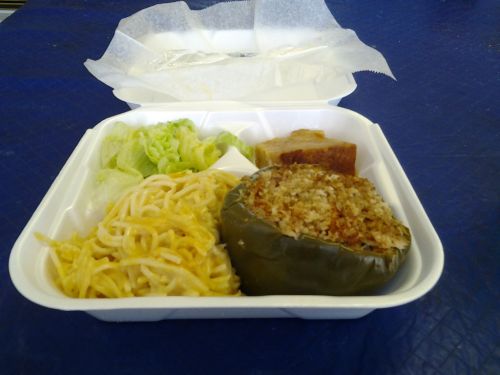 Rare is it that patrons dine in at Cajun Meat Market, where freezers brimming with raw beef, sausage and chicken stuffed with seasoning and seafood loom over the handful of chairs against two kitchen-style tables.

But in addition to the fresh meat, the market churns out between 60 and 70 plate lunches each day and offers a litany of other lunchtime menu options. So my guest and I were beckoned, and we dined in.

The turnaround on my plate lunch was just that. The server took my order and cash, spun around into the kitchen and immediately handed over the plastic foam box containing a bell pepper stuffed with seafood dressing, macaroni and cheese, a green salad and bread pudding.

For $7 – tax included – the box contained more than enough food to satisfy me. In no way does the establishment skim on portions – the bell pepper was filled to the brim and rested against a bed of spaghetti noodles with cheese large enough to top the portion boundaries.

I’m not a great fan of mac and cheese served this way, as the cheese isn’t always consistently distributed. That wasn’t so much of a problem on this trip to the meat market, and my expectations on this side item were exceeded.

The seafood dressing was good and filling, as mentioned, even if it was surprisingly bland. I suppose for a restaurant churning out five dozen lunches a day, it’s best to play it safe and not over-spice the meal, but it left me slightly wanting.

He ravished the real-beef patty, which he said was seasoned like a homemade burger. Meat is the specialty here, and the hamburgers exceed any fast-food options with comparable prices, he reported.

“The crunchy fries were a nice second fiddle to the burger,” he said, pointing out the seasoned salt sprinkled atop the golden-brown potatoes made him covet more of the side dish.

As if this wasn’t enough, the meat market delivers to most west Houma locations and will cross the Intracoastal Waterway on occasion, depending on the day’s business. The cost is $1 per plate lunch or sandwich.

More than a retailer, Cajun Meat Market is more than worthy of a lunch break.