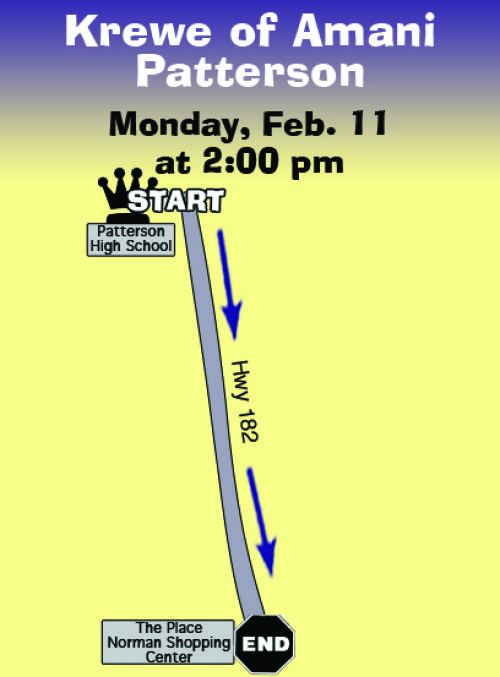 The 15-member, co-ed Krewe of Amani Civic & Pleasure Club was formed in 1998. The krewe is celebrating its 15th year; however, this year’s royalty are crowned King & Queen Amani XVI due to two kings and queens being chosen in 2008 for the krewe’s 10-year anniversary celebration, which had the theme “All Good Things Come in Pairs!”

The ball captain chooses the theme and the ball co-captain chooses the costumes. This year’s theme is “Amani Cruises Destinations Around the World.” The seven floats are rented from USA Floats in Crowley, La. Cars, trucks, flat beds and professional floats help add size to the parade, along with deejays, dance teams and the Franklin High School and West St. Mary High School bands.

This mystic organization will reveal the identity of their 2013 royal court on Saturday, January 26.

Amani has the only local Lundi Gras parade in St. Mary Parish. The krewe’s oldest member is 64 years old and there are three founding members that remain active with the group.

The krewe volunteers throughout the City of Patterson with Annual City-Wide Clean-ups, the Annual Christmas Parade and feeding programs. Amani annually awards a board of directors’ scholarship and an achievement award to graduating seniors within the Tri-city area valued at $500 each.

The parade begins at Patterson High School, travels east on La. Highway 182 to Main Street and disbands at The Place Norman Shopping Center.

The Krewe of Cleopatra is Terrebonne Parish’s only Lundi Gras parade.

Founded in 1987, this is the krewe’s 26th anniversary. Cleopatra has more than 600 members riding on 21 double-decker floats, plus the queen’s float.

Cleopatra’s floats are rented from the Krewe of Caesars in Metairie and the artwork is done by Blaine Kern. Cleopatra takes great pride that when they roll down the streets of Houma their floats are being seen for the first time in the area. This year’s theme is “Strolling thru the Park.”

The parade captain is Karla Yelverton, and the club president is Liz Trosclair.

Cleopatra collects for the Good Samaritan Food Bank and other charities and hosts a Halloween party for all at the Courthouse Square, through their Mona’s Kids at Heart organization. The organization was renamed in honor of longtime member, Mona Guillory, who passed away last year. Also, the krewe sponsors an annual fishing rodeo called Hook-On and Hook-Up and this is the second year the group will have their annual band contest.

The members try to live by the motto, “Women are not only generous through our hearts and wallets the day we ride, but also throughout the year.”

The parade begins at Southland Mall, rolls down West Park Avenue to Hollywood Road, takes a right then a left to West Main Street where it proceeds to Barrow Street, takes a right and disbands at the Houma-Terrebonne Civic Center.

Krewe of Christopher (Tableau Only)

The Krewe of Christopher was organized in 1954 and currently has 125 members. The organization does not have a parade and holds only a tableau and a ball.

The krewe’s tableau, which is open to the public, is scheduled for the evening before Mardi Gras at the Warren J. Harang Jr. Municipal Auditorium. As per tradition, the 2013 theme and royal court, which consist of the king, queen, six maids and six dukes, are revealed to the general public on the night of the tableau.

The krewe’s captain is David Gauthreaux. Co-captains are Glenn Froisy and Randy Teeter.