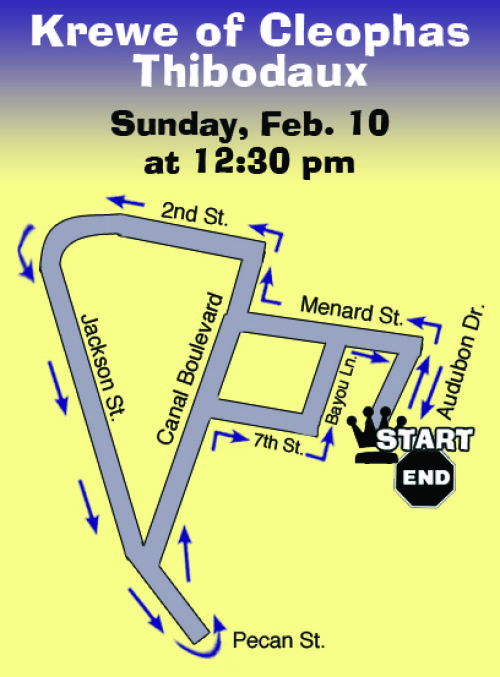 Thibodaux’s second oldest carnival club, the Krewe of Cleophas, also known as “The Poor Man’s Parade,” dates back to 1957, but disbanded between 1964 and 1971. The 56-year-old krewe maintains the ideals of a family-oriented organization.

Each float is designed by its riders and can include entire families. The co-ed krewe has 250 members who ride on 25 floats featuring the theme “Cleophas Salutes the Children.” Riders on privately-owned, independent floats, several auxiliary units and visiting queens of the area partake in the procession.

The Krewe of Cleophas captain is Audie Levron and co-captain is Peggy Ordoyne.

The parade begins on Audubon Drive, proceeds to Menard Street where it takes a left, goes to Canal Boulevard, takes a right, turns left on 2nd Street, left again on Jackson Street, rolls down to the railroad tracks at Pecan Street, makes a u-turn onto Canal Boulevard, takes a right on East 7th Street, a left on Bayou Lane, a right on Menard Street, and wraps back where it began on Audubon Drive.

The Krewe of Chronos, which follows the Krewe of Cleophas parade, is Thibodaux’s oldest parade organization. Rolling for its 59th year, the krewe celebrates with the theme “Le Carnaval Des Animaux.”

This all-male organization of 200 members throws krewe cups and doubloons as well as traditional throws from its 20 all-throwing floats. Joining in the fun and providing the music are Tara and E.D. White high schools’ marching bands.

2013’s mystic king and queen are revealed Feb. 2 at the organization’s tableaux and ball.

The parade and ball captain is Ryan Naquin.

The parade begins on Audubon Drive, proceeds to Menard Street where it takes a left, goes to Canal Boulevard, takes a right, turns left on 2nd Street, left again on Jackson Street, rolls down to the railroad tracks on Pecan Street, makes a u-turn onto Canal Boulevard, takes a right on East 7th Street, a left on Bayou Lane, a right on Menard Street, and wraps back where it began on Audubon Drive.

The Krewe of Terreanians parade is always one of the highlights of the Mardi Gras season and is one of the oldest parading carnival clubs in Houma. Now rolling for its 63rd year, the 400 members pitch a variety of throws and specialty beads from its 20 floats. The marching bands from Terrebonne, Vandebilt Catholic, H.L. Bourgeois and Crowley high schools, Houma Junior High School and Grand Caillou Middle School are providing the beat.

The krewe holds its tableaux and ball at 7 p.m. the night before their parade.

In 1950, the Greater Houma Carnival Club was formed and paraded on Saturday night. Thousands of citizens from neighboring parishes came to witness the historic parade. The all-male krewe selected its name from the parish Terrebonne, which in French means “good earth.” The group later changed its name to the Krewe of Terreanians. The parade eventually migrated to the Sunday afternoon before Mardi Gras.

The parade begins at Southland Mall, rolls down West Park Avenue to Hollywood Road, takes a right then a left to West Main Street where it proceeds to Barrow Street, takes a right and disbands at the Terrebonne Civic Center.

A family organization, the Krewe of Des Allemands offers residents on the eastern border of the Tri-parish area a Mardi Gras experience close to home. There’s no real theme for the parade – everyone just comes up with their own ideas.

This is the krewe’s 19th year and the 300-plus riders will be throwing parade cups, medallions, beads and more from 10 all-throwing floats. The king and queen toss special cups and medallions, as does the grand marshal.

The grand marshal this year is March Dufrene.

The parade begins on Whitney Drive to Highway 90 through the business district, right on Dejean to Old 90 then right on Lorraine Drive.

This is a “come as you wish” parade. Any float, boat, truck, wagon, car, etc. is allowed. The participants decorate their own riding vessels. The police, fire departments and the U.S. Coast Guard Station participate as well.

Many locals and out-of-towners have started an annual tradition of bringing the whole family to Grand Isle for a day filled with fun!

The parade begins at Cisco’s Cantina on Blackberry Lane & Highway 1, travels down Highway 1, where it disbands at the Baptist church on Cedar Lane.

The female Krewe of Galatea takes its 44th ride through the streets of Morgan City on beautiful floats created by the krewe’s members. The krewe is mystic so this year’s theme and royal court are kept secret until after the tableau and ball.

Last year’s theme was “Out of Africa.”

The organization was formed in 1969 by its first captain, Adrienne Engel, and is designed to allow the ladies of Morgan City to share in the Carnival experience.

The theme of this year’s parade is “Celebrating the Months,” which is the same theme as the krewe’s tableau scheduled the night before the parade.

Now in its 67th year, the 150-plus children riding on 10 floats are accompanied by the Lacache-Montegut Middle School marching band.

Karah LeBoeuf and Gavin Dupre are the krewe’s parade captains.

The first all-female night parade in Lafourche Parish, the Krewe of Nereids, is rolling for its 29th year.

From their illuminated double- and single-decker floats, the group’s 200-plus members pitch traditional items, along with some specialty throws.

This year the krewe sparkles with the theme “Diamonds Are a Girl’s Best Friend.”

The queen’s pages are her two grandsons, Connor and Carson Guidry.

The krewe’s president is Jenifer Cheramie.

Nereids begins at the north end of Golden Meadow and parades along Highway 1 to the south end of town.