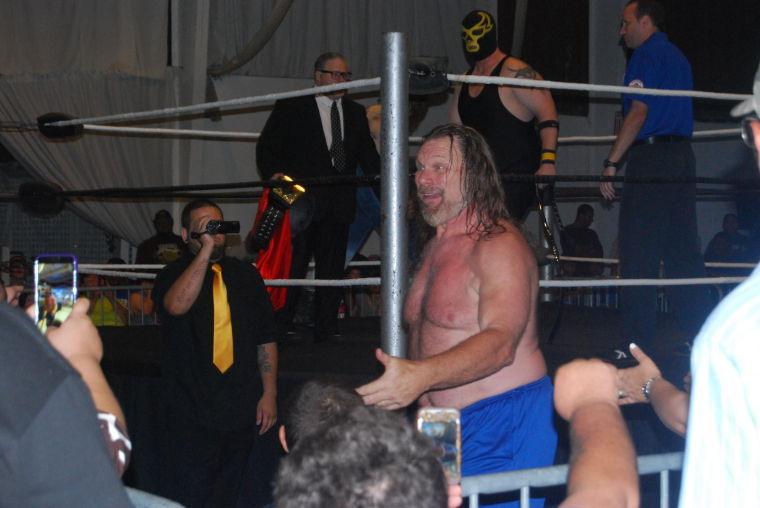 His mission? To kick some butt and raise much-needed dollars for charity.

Duggan is scheduled to headline Mid-South Wrestling Entertainment’s ‘Slamming for a Cure’ event on March 22 at the Evergreen Cajun Center in Houma.

The event raises money for Relay for Life, and all proceeds go to the American Cancer Society.

This is the second time in the past year that Duggan comes to the area. He wrestled in town in July 2014. Now 61, the legend isn’t quite as fleet of foot as he once was. But he still puts on a show and can hold his own in the ring.

“Houma, Thibodaux, Morgan City, (there are) great wrestling fans down here,” Duggan said during his last Houma appearance. “It’s great to come back. So many folks come out, and they said, ‘Hacksaw, I’ve been watching you since I was my son’s age.’ It’s nice to meet a new generation of fans.”

In Duggan, the local show has hauled in arguably one of the most recognizable wrestling names of all-time. A Glen Falls, New York native, Duggan’s been in the business since the late 1970s when he started carving his spot at independent shows in Texas and Georgia.

Hacksaw’s strongest independent run often carried him through Louisiana. From 1982-86, the wrestling legend competed in Mid-South Wrestling – an indy company that routinely took its act into the Pelican State.

Duggan said he routinely fought in the Houma-Thibodaux area in his early days, listing several of the area’s towns as among the places he’s competed. Hacksaw also lived in Pineville during his career in the indies.

After battling in Mid-South Wrestling, Duggan got his big break, signing a contract with Vince McMahon and WWF in January 1987.

During a 20-plus year run in the mainstream circuit, Hacksaw did just about everything there is to do within his sport, winning countless titles and competing all across the globe. Duggan retired from the WWE in 2009, but still makes sporadic appearances when needed. Since his retirement, he’s returned to the indies – his way of giving back to the fans who have supported him after his nearly 40 years of competition.

Duggan was inducted into the WWE Hall of Fame in 2011, solidifying forever his place in wrestling history.

“I’m genuinely happy that (fans) remember me,” Duggan said. “It’s a very competitive business, professional wrestling. It’s hard to stay current in any profession. Doing it for 35 years and still having fans is great. I’m very appreciative to have those folks out there.”

There’s sure to be a lot of fans at the upcoming Houma show, because Duggan isn’t the only attractive draw who is competing. He isn’t the only former WWE star, either.

Organizers of the event tout that tickets are going fast for the show, so one probably wouldn’t be wise to wait until the day of the show.

By probably about 4:05 p.m. chaos will have taken over within the ring. But by 7 p.m., much-needed money will be raised to fund cancer research.

You just can’t beat that.