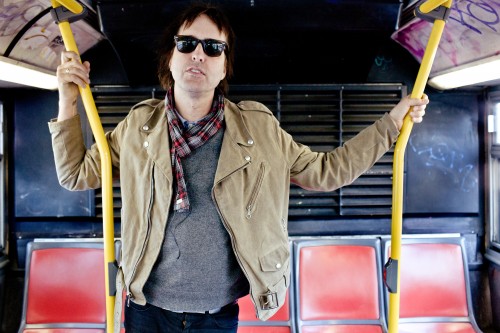 Look, we all know there are times when only soft-spun imagery sung in an intimate hush will do, and others when you need the needle stuck in red. But when the extremes aren’t in effect, it’s a blessed thing to have music at the ready that will fit almost any occasion—riding to work, hitting the gym, doing the dishes, doing the do.

These aren’t mainstream efforts, but they should fit most folks’ needs when the solid middle is the desired destination.

CHUCK PROPHET is one of those artists that you want to push on people. He writes great smart songs, he sings in a world-weary drawl, he plays economically tasty and nasty guitar, and he rocks. He’s got more than 10 albums under his belt (a couple more are knock-offs or bootlegs) and they’re uniformly excellent. Why he’s not a household name is another exhibit in the case against life’s fairness. Hey, I’m doing my part.

His latest, TEMPLE BEAUTIFUL, keeps the string alive and ranks with his best. It’s his love letter to his adopted hometown, San Francisco, the city that ranks second only to New Orleans in narcissism (New York has its own category). Non-residents wouldn’t even know that since the city’s name is never uttered, nor are there any references to streetcars, earthquakes or Karl Malden.

Instead Prophet sings about the nightclub where he cut his musical teeth that served as the Rev. Jim Jones’ church before he passed around the Kool-Aid (the title cut), the man who shot Harvey Milk (the gay-rights activist) and some guy who declared himself emperor of the U.S. in the late 19th century – not only tolerated by the locals, but feted by them (“Emperor Norton In The Last Year Of His Life”). Willie Mays gets a song, but say hey …

What to say about the music? I could go on about its pulse-quickening melodies, its perfect marriage of swagger and tenderness, its variety of pace and textures, its outstanding musicianship (not least of which are the razor-sharp guitars and muscular, swinging rhythm section.) But you would have to take my word for it, something I wouldn’t do myself. Sample for yourself and see.

Is it ground-breaking or innovative? Not really. Does it smack of manipulation when he adds honking baritone sax to the end of a line, “shoobie doo bop bops” to the chorus, twin guitar lines and accenting chimes? Maybe, but it feels fresh and it works.

THE HEARTLESS BASTARDS are relative newcomers in comparison. Erika Wennerstrom owns the band; she sings, writes all the songs, plays guitar and hired the new members after firing the old ones. She’s an acquired taste.

Similar to Lucinda Williams, she loves using words as another musical element, stretching out, slurring and distorting sounds and syllables to suit her needs. She’ll also repeat lines for emphasis until they begin to lose meaning or gain another. Her voice is dark, deep and powerful. She doesn’t seem like she’s straining when she unleashes an occasional wail.

Their new one, ARROW, is by far their best. The new band members are a huge upgrade, especially the additional guitarist, Mark Nathan. Likewise the production is way improved with Spoon’s Jim Eno providing guidance. The sound’s far from slick, but it’s got space between the instruments and an oomph that strokes the spine.

The opener, “Marathon,” shows chutzpah. It’s a slow, long builder with a satisfying payoff. The real opener is “Parting Ways.” A kick start drum, loping bass and Stones-like rhythm guitar usher in Wennerstrom’s clear-eyed kiss-off to a departed lover: “I need a little bit of whiskey and a little bit of time, to ease my troubled mind.” The song’s got several disparate parts that aren’t predictable but hang together in a thrilling whole. “Got to Have Rock and Roll” may seem an obvious statement but the song that bears its name makes a new argument for the case. “Only for You” couldn’t have been made by the band’s prior version, for it swings along in a slow-rolling gait that’s as supple as it is breezy. Nathan’s guitar is perfect meat on the bone.

“Simple Feeling” could certainly have fit into the old band’s oeuvre with its droning guitar, smashing drums and elliptical and repetitive (did I say repetitive?) lyrics. But the aforesaid new guys pull it off with more panache. “Skin and Bone” starts with some Latino congas, then settles into a campfire lament that soothes as it engenders an inner glow.

“The Arrow Killed the Beast” is a novelette of a song (in length, not in message.) Tympanic drums roll as a desert/western guitar spikes throughout as she wails, “And the arrow killed the beast that is burning inside of me.” Which makes the old-school rocker, “Late in the Night,” all the more piquant when it follows. A monster riff brackets some serious yearning and some in-the-pocket ensemble playing.

“Low Low Low” has front porch written all over it, sonically and structurally. “Down In the Canyon” is a roaring closer that lurches with power chords and menace – another long form offering, this time with narrative flow. It’s a nice bookend with the opener.

While I’m not as sure this one will appeal as broadly, don’t you feel compelled to give a band with this cool a name a shot?

DR. DOG is as shaggy as their name. They’ve been around as about as long as the Bastards, coming from Philadelphia to become a mainstay of college radio and the festival circuit. They make pleasantly off-centered rock that’s got about a 2-3 spin likability factor (just about right, I think). They’ve got a new drummer who’s got some soul in his sticks and they take full advantage of that on their new one, BE THE VOID. Am I allowed to say that this is their best so far, too?

Sporting two lead singer/songwriters, the band’s got the kind of dual personality that’s been in vogue since you-know-who. There’s a built-in variety, held together by an instrumental cohesion and a willingness to pile on the harmonies with abandon. Bassist Toby Leaman has a darker, smokier voice and guitarist Scott McMicken has the innocent naif thing down cold.

The songs here are, as always, the deal. Opener “Lonesome” is a shuffling sing-a-long that welcomes the listener with empathy, not self-pity. “That Old Black Hole” gets its jam on with a driving beat and interstitial hand drums and inspirational Afrobeat melodic structure. ”These Days” is a revved-up sports car of a tune, bursting with barely-contained exuberance. “How Long Must I Wait” has a funked-up beat (with blown-out drums) and a yearningmatching its message.

“Get Away” has mambo inclinations until the shout-along chorus. “Do the Trick” ups the funk quotient with its thick greasy bass line and cowbells (and again with the exultant chorus!) But with the back-to-back centerpieces, “Vampire” and “Heavy Light,” the album cements its place in the listener’s heart. The former is drama without the melo- prefix and it gets gritty even with the bombast. The latter pops in with a complex but totally irresistible world beat that’s married to an equally infectious sunshiny melody.

There’s a slight let-up on the latter third. “Big Girl” is kind of goofy, but not in an annoying way. “Over Here, Over There” isn’t bad, just nondescript. “Turning the Century” has a bit of Obama-remorse, but it’s done so amiably you’ll hardly notice any negativity. If you can, spring for the extra three tracks on the deluxe version, as they’re A-list material for most bands’ records.

– Dave Norman is a local attorney who has written or participated in various critiquing endeavors in the past (movies, restaurants) but who believes now has found his real niche as a music critic. In his opinion.

San Francisco singer/songwriter/producer Chuck Prophet’s website credit his longevity to his subtle flair, “a vivid parade of razor-edged one-liners camouflaged in a slack-jawed drawl, songs about heartbreak and everyman heroism, drenched in twisted lines of rude Telecaster.” His latest CD, “Temple Beautiful,” is being lauded as much for his lyrics as his guitar playing.