Editor’s Picks for May

Scripted plots shift with each bruise 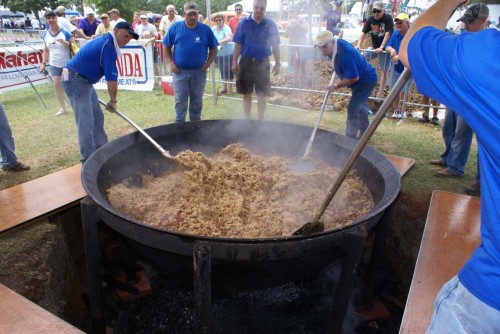 Thibodaux Firemen’s Fair and Parade – May 3-6

The Thibodaux Firemen’s Fair returns for a four-day celebration early this month.

The fair dates back to World War II. It is the only fundraiser for the Thibodaux Fire Department. Last year, the fair raised more than $600,000.

It opens at 5 p.m. on Thursday and Friday and 11 a.m. on Saturday and Sunday.

Live auctions begin at 7 p.m. Saturday and after the parade ends on Sunday. At the end of the fair, which closes at 9 p.m. Sunday, a raffle ticket worth $10,000 is pulled.

Tiger Tour arrives in Thibodaux – May 15

LSU head football coach Les Miles leads the annual Tiger Tour through the Tri-parishes when he makes a stop in Thibodaux.

The LSU Tiger Tour, a coordinated effort by the university’s three main fundraising branches, makes nine stops this year. It rolls into Thibodaux’s Warren J. Harang Auditorium on May 15.

Believe it or not, the Little Sisters of Hoboken are back for more.

“Nunsense” returned to Houma in March for a fundraiser for United Methodist Church. Now, the goal is the same as the talented cast portraying colorfully comic roles graces the stage at Le Petit Theatre.

All proceeds are dedicated to Le Petit’s renovation fund.

The 45th-annual Jambalaya Festival, a whirlwind of fun, excess and competition, returns to Gonzales, or the “Jambalaya Capital of the World,” this month.

The Champ of Champs cook-off symbolizes the start of the festival each year. It is scheduled for 2 p.m. on Thursday. Kyle Frederic won the event last year.

The jambalaya-cooking contest is intertwined throughout the three days, with competitors’ requirements escalating as the tournament continues.

The festival’s carnival begins a day early on Wednesday with pay-one-price ($20) rides. A weekend pass is available for $50.

Saturday features a 5K and 1-mile fun run in front of the civic center, a car show, and the mini-pot cook-off, which is split into three age divisions. An arts and crafts show is scheduled Saturday and Sunday.

Chefs cook a pot of jambalaya at the annual Jambalaya Fest in Gonzales.