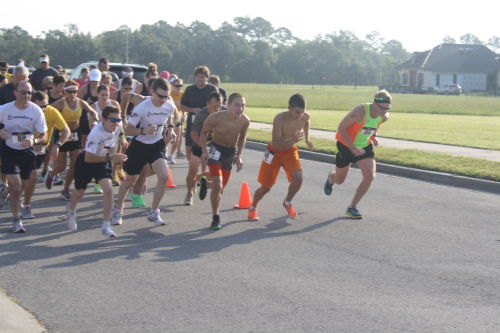 South Louisiana’s fried delicacies may not win doctors’ approval, but residents who have overindulged have the chance to begin a healthier lifestyle thanks to a local nonprofit.

The J C Advance Foundation, started by Advance Physical Therapy owners Jason Jones and Chet Sternfels, kicks off its second annual Run 4 the Health of It race series Aug. 16 in Thibodaux. Jones, a certified running coach, said that he’s always wanted to organize a race and that he got the idea for a race series from speakers at a conference in Seattle.

“I thought it was a really neat idea because nobody around here did that,” said Jones, who was inspired by Houma’s Run for Excellence to make his race an education fundraiser. “It’s just such a huge event and so good for the schools. I wanted to do something for Lafourche Parish,” where he works and lives.

Like the Run for Excellence, proceeds from Run 4 the Health of It go toward grants teachers can apply for, and Jones said the response to the program has been positive.

“I know that the teachers struggle. I know that there are always budget shortfalls. We just felt like it was a good thing to do. … A lot of grants that are out there, it’s so complicated to apply for them that they don’t even do it. We didn’t want that,” he said. However, the foundation also “did not want to just give a check and not know where the proceeds were. We wanted to know where they were going and what they were going for.”

Those interested in a grant complete a one-page application, providing information on the amount of money requested and its intended use. Grant money raised the previous year is awarded to approved applicants at the first race each year.

This year, the first event takes place downtown, followed by a party with food, drinks and a performance by Snapper and the Fishsticks. Jones said he expects the lower intensity of the first race, which is two miles, and the post-race festivities to encourage more people to attend. “If you do a two-mile, I think you can draw more people to come out and do it. And it’s pretty neat to have it on a Friday night. You don’t really have anything like that” in Thibodaux, he said.

Following the run this month, the series gets progressively tougher, with a 5K race in September, a 10K in November and a 15K in December, all beginning at the corner of North Acadia and Percy Brown roads. Individual races have first-, second- and third-place winners in male and female categories, and those who place in every event qualify for series awards. Runners get four points for placing first, three for second and two for third. Whoever has the most points at the end of the series wins the championship.

Jenny Lafont, last year’s overall female winner, said the race’s structure works for experienced runners, as well as beginners. “I think it’s a great challenge. You can start off at a two-mile, and you can work your way up,” she said. “For someone who is not a runner, it starts them on a good track of becoming more into health and fitness.”

Lafont suggested training for the two-mile race by doing quick runs and alternating between speeds. She said longer races require endurance exercises and keeping track of one’s times for each mile completed. An avid runner, Lafont also enjoys the family-friendly atmosphere the race provides. For the younger crowd, a half-mile run is held before the first race and a one-mile run before each subsequent race.

“When you have kids that start to do the race as a fun run, they get excited. It motivates the whole family,” Lafont said. “(Event organizers) are doing a great job with that, getting the whole family involved.”

Lafont looks forward to this year’s event and has been spreading the word to as many people as possible. “It’s important for the community,” she said. “It gets everyone together, not

just for socializing, but for healthy living. Then you’re helping other people, too.”

Last year’s Run 4 the Health of It drew about 200 participants for the first race and raised almost $10,000 total. Jones is proud of the event’s success but hopes the numbers at least double this year. He believes a connection should be made between fitness and education.

“I have three small children, so it’s very much at home for me. South Louisiana is not what it should be in health and wellness. This is just a good way to try to promote that,” he said. “I see across the country how healthy cities are. We don’t have that here, and if I can at least make a dent in that, it would be awesome.”

Runners participate in a leg of Run 4 the Health of It. The race series returns for its second year with a 2-mile run Aug. 16. Subsequent series events are in September (5K), November (10K) and December (15K).