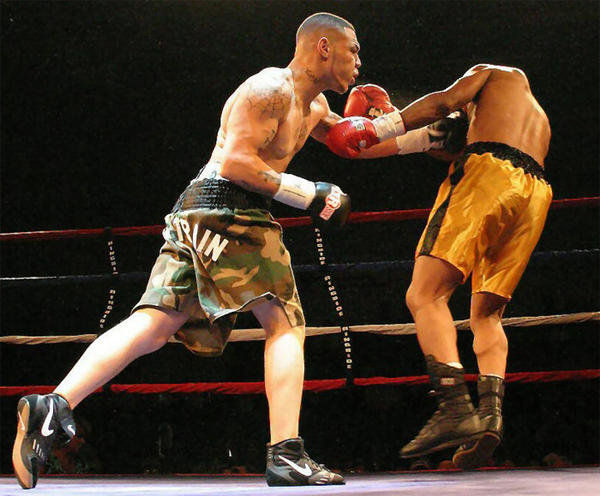 The last two times Zane Marks sat in a professional boxing ring, the story ended the exact same way – with Marks on his back without the proper motor skills to rise to his feet before an official’s count to 10.

The last time this occurred was on March 3, 2012 at the BB King Blues Club & Grill in New York, New York. Marks lost to upstart Will Rosinsky on that night – a promising prospect from the Northeast. Before that, he got stopped by Derrick Findley on July 10, 2010 in Bay Saint Louis, Mississippi.

Both fighters were talented, but Marks said he thought he could beat each guy if things went his way.

In the mid-2000s, Marks was a knockout king in the Southeast – the winner of several-straight bouts on the local circuit. For a stretch, he was arguably the top fighter in Louisiana.

But in these fights, he said he wasn’t as quick, was a bit stale and, frankly, was just a hair off – somewhat of a trend lately for the fighter who has lost five of his past seven bouts, dating back to March 2007 when he lost a close decision to Cleveland Corder in Boise, Idaho.

“I wasn’t as dedicated as I should have been,” Marks said. “I made a lot of mistakes. I’ll be the first to admit that – I didn’t do some of the things I should have done to prepare for a few of those fights.”

There have been plenty days in the past several years where Marks thought about the fact that he may never fight again. He said he’d never use the word “retire,” but he touts that he’s always understood that his in-ring career might be done.

After all, Marks is 31 now and has eaten a lot of punches. He said he’s come to grips with the fact that he’s no longer the “young” prospect that he once was, but is now instead a veteran who needs to either immediately make a push to revive his career or sit at home and wonder what might have been.

Marks said he’s choosing to do the former over the latter.

The first stop on his quest for resurrection is in Cut Off, Louisiana.

The local fighter said he’s refocused, refreshed and ready to be better than he’s ever been when he takes the ring on March 28 at the Cut Off Youth Center as part of “Redemption”, the boxing show being put on by longtime promoter Chad Broussard. The card features a seven-bout lineup filled with some of the top talents from around the Houma-Thibodaux area.

For Marks to be better than he’s ever been will be hard to pull off, because when he was at his peak, Marks was dynamic and explosive – a knockout punch waiting to happen.

“I’m working hard, and my goal is to be better than ever,” Marks said. “I wanted to come back into that area and show those people that I am humbled, and I appreciate their support. I wanted to show them that my career is back on the right path once again.”

For Marks, the Cut Off show may be his last shot.

After struggling in several of his past few bouts, Marks said he’s well aware that he needs to get a win against Justin Williams to put himself in position to get back on track.

Williams’ record is a mess. He’s just 4-10-2. But he’s no tomato can to be slaughtered, either. Williams has never been knocked out and has gone the distance against several of the top fighters in the area, including Travis Scott and Jarred LeBlanc. He’s also traveled out West and lost decisions to top prospects like Hugo Centeno Jr. and Alex Theran.

Marks was offered an opportunity to speak directly to Williams, but declined to do-so, touting that he doesn’t have anything against his opponent.

“That’s something the old me would have done,” Marks said. “I’m not here to trash talk anymore.”

He instead said that he respects Williams’ toughness, and knows that it’ll be a challenging fight. He then gave a little zing to his foe, telling him that he better come ready.

“He’s a good fighter. They tell me that he’s really tough and he doesn’t give up,” Marks said. “But I’ll tell you this – he better come ready for war, because that’s what it’s going to be. It’s going to be a war when we step in that ring. I’m not coming to roll over for anybody. I’m thankful to him, and to the promoters for the opportunity to fight.”

Marks said there are several reasons why he wants to do this.

Of course, he’s doing it for himself. After straying from his former promoter in the late 2000s, Marks said he lost touch with a lot of the important things in life. In his past few fights, he said he wasn’t focused and was just going through the motions.

“I was in a really dark place,” Marks said. “I needed to humble myself. The things I were doing weren’t working for me – not at all.”

Since that time, Marks said he’s been splashed in the face with tragedy several times to remind him that he needs to right his ways.

In Oct. 2014, longtime boxer Emanuel Augustus was the victim of a random shooting in New Orleans, which police said was a random act of violence in the city.

Augustus has since gotten better, but was once in critical condition. Marks said he’s a longtime role model – a fighter he’s looked up to his entire life.

“That hit me hard. It hit close to home,” Marks said.

More recently, Marks said he’s become acquainted with a young lady named Brandi Ramagos – a seventh grader with a physical disability that confines her to a wheelchair.

Marks said on days when he struggles to get motivated to train, he looks to Ramagos for inspiration. He said she is why he is working so hard to come back strong. She is why he wants to be better than he’s ever been before.

The young lady will be in attendance at Marks’ next fight, and he wants to give her a show.

“She’s always so happy, and she’s always in good spirits,” Marks said. “If she can do that with the condition she’s in, the least I can do is work hard to better my craft to be the best boxer I can be.”

Whether it happens – that remains to be seen. But Marks said he will empty his soul on the canvas of the ring in the Cut Off Youth Center to give it his best shot – perhaps his last shot at reclaiming the glory he sought to attain.

“There will be ring rust, but I will do my best,” Marks said. “There’s a lot of fight left in me, and I just want to give the fans a good fight. I was born for this. Boxing is the only thing I’m good at. I can hardly tie my shoes, man. But I damn sure know how to fight. This is what I’m here to do, and I am here to get myself right and get back where I need to be. It’s personal, and I’m just ready to get to work.”

Anyone wanting tickets to the night of fights is asked to visit www.boxncarpromotions.com. Broussard said fans may also call him direct at 337-298-7658. He said tables are available, and general admission will also be sold the night of the show.