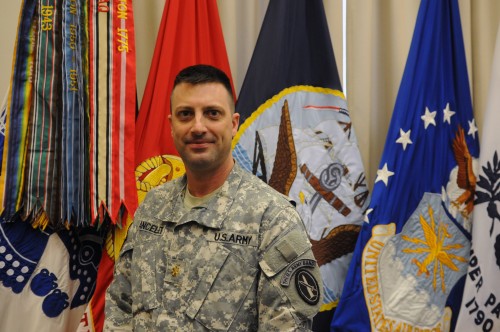 At age 41, the Houma native is among the Army’s five commissioned officer band conductors. It’s a bit of a second career for the Terrebonne High graduate – he landed the military post virtually by chance. “Growing up in Houma, La., becoming a military band officer never entered my mind,” he says.

After earning a music degree from Northwestern Louisiana University in hopes of becoming a high school or college band director, Ancelet landed a teaching job at Leesville High School near Fort Polk. “I still didn’t think about the military, believe it or not.”

Five years later, while pursuing his master’s degree in music at George Mason University in Washington, D.C., Ancelet happened on his dream job. “I saw these bands playing at the Capitol, going to the White House and, on TV on July 4th, playing with the National Symphony and I said, ‘You know, I want that job,’” he recalls.

After an intense two-day audition, Ancelet was among the 250 people selected as a conductor and leader of the band field. The U.S. Army Band in Washington, D.C., includes 245 enlisted musicians and five conductors. Twelve years later, he remains a military band conductor. His next assignment is to lead the Army’s heralded “Pershing’s Own” at Fort Myer.

Since August, Ancelet has served as an officer in special events planning for the 57th Presidential Inauguration on Jan. 21.

“Anything that goes on outside of the swearing-in ceremony or parade falls under the category of special events – inaugural balls, concerts or prayer services,” Ancelet explains. “My job is to look over some troops and make sure we get anything militarily that is needed for these events.”

“Anything,” he says, can range from scheduling color guards, honorary bands at each ball or clearances for performers at various venues.

“Everything down to when electricity is plugged in is scheduled and accounted for,” Ancelet said. “The littlest hitch can affect the course of the event. Everything is timed down to the wire.”

Although Ancelet’s work Jan. 21 will be behind the scenes, it’s for certain his mom Lorraine and family and friends will be lauding the Cajun boy’s input on TV.

“Unfortunately, there is no active military band in south Louisiana,” he says. “I do miss my people terribly. I miss the Cajun hospitality. But I do hope I’m doing everyone back home proud.”

U.S. Army Maj. Treg Ancelet, a Houma native, is a member of the Joint Task Force – National Capital Region, assigned to help with the 57th Presidential Inauguration on Jan. 21