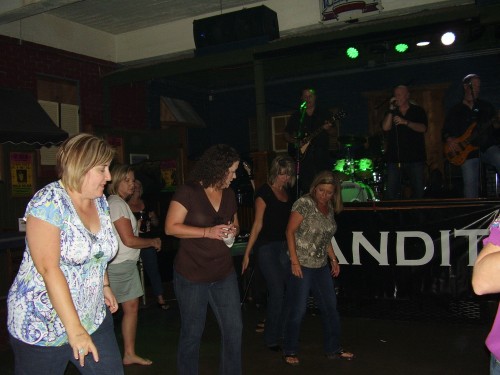 The Olde Icehouse in Thibodaux is a blend of classic and contemporary, a budding harbor for live music spanning an array of genres and, at times, a solace for an older crowd seeking refuge from today’s popular music.

The nearly 80-year-old, two-story brick building abided a substantial change in 2008 when then-owner Joseph Thibodaux transformed it from a shell of an icehouse into a tavern. Late last year, a 20-year deejay bought three-quarters of the ownership and has since made it a priority to showcase a variety of live music.

“I’m working with musicians,” says 35-year-old Mike Guillot. “I want this to be a live music venue, and I love all music. Any band that comes around, we offer them a place to play.”

The bar is separated into three sections: A 4-foot-tall stage concedes to a dance floor lined with tables and chairs, an elevated lounge stands above the action here and a peninsula-shaped, wood-finished bar juts out near the entryway, offering a slight reprieve from the sound of music and a sports-tuned television.

A campaign poster from 1940 touting Earl Long as the right choice for governor pays homage to Huey P. Long while hanging framed above the lounge. “Carry on for Huey and O.K. (Oscar K. Allen),” it reads.

Among other items, the poster calls for “Free hot lunches for poor children,” “Additional facilities for feebleminded children,” and “Free bridges all streams large or small.”

Doors at the Olde Icehouse open at 3 p.m. Wednesday and Thursday and close both days at midnight. The bar is open from 3 p.m. to 2 a.m. on Friday and Saturday. It’s closed Sunday through Tuesday.

Every other Wednesday, the bar features its house special: Jam Night. Randy Ellis, a Grammy-award winning guitarist with Chubby Carrier and the Bayou Swamp Band, is one of the night’s stalwarts, Guillot says.

Jam Night usually coaxes 15 musicians to play a wide variety of instruments, including harmonicas and bongos. “The musicians love it,” the bar owner says.

A longtime deejay, Guillot says he’s impressed with the musical talent this area has to offer, particularly groups from “down the Bayou.” He adds that he won’t restrict anyone from playing, and regularly features different tones of rock and country music.

While classic rock cover band Bandit performs on a Friday night, an older sect of patrons dance before the stage and a handful of men and women in their 20s rotate between bar stools and the fringe of the concert.

“I don’t come here often, but when I do come, I enjoy it,” says 48-year-old Robert Quebedeaux, of Labadieville. “It’s hard to find a place for older people to go. I don’t like the style of music today.”

“It’s pretty chill and laid back,” says Dustin Simons, 21, of Thibodaux, as he drinks with co-workers.

Even with the activity, a large portion of the establishment goes unused. The second story is vacant, and the front of the building currently serves as storage.

Guillot says he wants to open a restaurant inside the old icehouse at some point, and he would like to convert the front of the building, which includes what could become a porch into a hangout.

Guillot says he’d also like to start a bar owners association in Thibodaux. In addition to being a unit that would carry more clout when it comes to municipal regulations, the Olde Icehouse owner says this group could have an altruistic purpose.

For example, bars could coordinate with one another so there is less overlap when it comes to music offerings. If one bar features country music on a Friday night, another should book a rock band, he reasons.

Patrons of Thibodaux’s Olde Icehouse dance to the tunes of Bandit. The St. Patrick Street barroom inhabits a building constructed nearly 80 years ago and has a reputation for providing live music from Wednesday through Saturday.