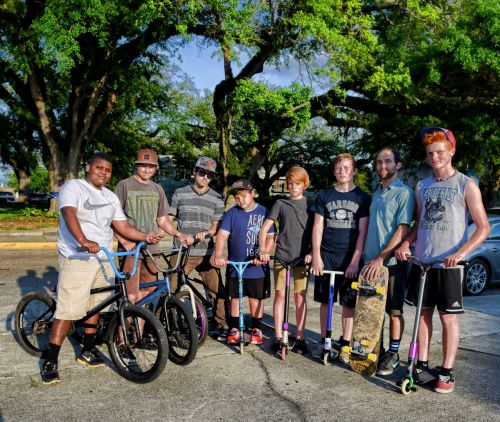 Local skaters will soon have a home to shred.

For the uninitiated, the term “skaters” encompasses people who use bikes, roller-blades, kick scooters and skateboards, and “shredding” is much closer to relishing than vandalizing. Parish officials hope to break ground soon on Houma’s first public skate park, roughly 8,000 square feet of concrete ramps, staircases, benches and a bowl, ushering another activity for youth and adults into Terrebonne Parish.

From the off-street alleys and obstructed nooks they now skate in private, a barrage of extreme-sport athletes will emerge and plant their flag in one of the parish’s most visible locations. Their long-awaited day is on the horizon.

“It’s going to be a great thing for Houma,” says Devin Paul Lirette, who skates about five times a week. “I can see the shift happening in everyone’s attitude, even law enforcement. I remember there were times you would get fussed for riding in a particular spot and get told to move. Now it seems like they don’t run you out as often. Garages are still kind of off limits. But just skating in the street or in that Chase Bank parking lot downtown, the police … they wave.”

Lirette, 27, has been skating a longboard for nearly two years and a skateboard for one year. He says that local skating talent and interest is suppressed because of the lack of prime locations and that the new park will spark a resurgence.

“When the park comes here, you’re going to have a huge revival,” he says. “People already know. They’re getting out there and practicing again.”

While obviously scaled down from the ambitious $3 million park once dreamed of – and subsequently shot down – the proposed park is heralded as an ideal starting point that will allow skaters to enjoy their sport without fear of fines. And parish officials are already considering expanding the initial spot and building a separate facility in two locations – tentatively in east Houma or the proposed Field of Dreams complex – should the concrete jungle garner widespread appeal.

“There are a lot of people who get aggravated by skateboarders because of where they skateboard and also, sometimes the noise and there’s competition with vehicles, public amenities, sidewalks and numerous things,” says Terrebonne Parish President Michel Claudet, who has championed the park. “I think that by trying to get people in one particular area, it’s certainly better. That’s not going to eliminate all of the skateboarding we have in our parish, but certainly if you can go to a really nice park to skateboard that’s made just for that, I would have to think that would be more enticing than trying to do similar maneuvers in places that … are not planned for that purpose.”

Spohn Ranch, a skate-park designer and builder out of California, is working under the purview of Duplantis Design Group, the project’s chief architect. The firm unveiled a preliminary proposal at a public workshop in January – attended by roughly 50 people – and is in the process of marking up the requested changes, says Chris Pulaski, senior planner with parish government.

The markup is expected soon, and after the plans are finalized, the parish will begin soliciting bids for construction, a 30-day process. Work should begin shortly thereafter, and barring an extended period of inclement weather, construction should be complete within 6-8 months.

“It would be great to have it as a nice Christmas present for everybody,” Pulaski says.

Area skaters asked designers to incorporate shaded seating areas and opined on technical aspects, such as coordinated transitions between the features and metal coping on surface edges to lessen wear and tear, Pulaski says.

Named in honor of the late Bayou Cane Fire Chief Jerry Gautreaux, Firemen’s Park will be located on parish-owned land near the library and civic center on Barrow Street.

There will be no charge to use the park, tentatively open from sunrise to sunset seven days a week for use with any non-motorized gear, including scooters.

And it will be “skate at your own risk,” meaning there will be no supervisors on scene – the only tasks for staffers will be opening and closing the park and cleaning the restrooms. State law mandates the recreation district takes a hands-off approach in order to dampen insurance liability.

Terrebonne Recreation District 2,3, which will handle maintenance and operations of the park, is still crafting its rules to be posted on signs. Smoking and alcohol use will be prohibited, of course, and continued violation of the rules will result in suspension of access.

Cameras will be installed to monitor the park, but adult skaters have already been asked to help with enforcement.

“It’s going to be up to (skaters) if they want it to stay open,” says Gary Besson, president of Terrebonne’s Recreation District 2,3. “They’ll have to help enforce rules.”

Signage encouraging the use of helmets and other safety gear will also be developed, though it will ultimately be up to the park’s users.

Vending machines and restrooms – inside a converted cargo container – will be on site.

In choosing the location, parish leaders sought elevated public property both in a central location and accessible via public transportation. The Houma Airbase finished second among five considered locations.

“The civic center (location) won out mainly because it’s so visible,” Pulaski says.

With a skate park comes a cacophony of rolling wheels, thumping landings and shouts of encouragement, not an ideal complement to a library.

But the park will be located closer to Barrow Street, “the far end away from the library,” adjacent to an empty civic enter parking lot and Little Bayou Black, Pulaski says. The parish also plans to install earthen berms to “absorb the sound or deflect the sound and prevent (the library or civic center) from being disturbed in any way by this skateboard park,” Claudet says.

Stakeholders have met with the library board and representatives of the civic center, Chamber of Commerce, Courtyard by Marriott and United Methodist Church, among others, Pulaski adds.

“We believe that both institutions – the civic center and the library – will be able to live harmoniously with the skateboard park,” Claudet says.

Gautreaux willed $10,000 to the skate-park project, kick starting the progress. Former Councilman Kevin Voisin took an interest in furthering the cause, Pulaski says, and the Terrebonne Parish Council earmarked roughly $600,000 for skate-park funding in its 2013 budget, rounding out the approximately $700,000 needed to make it a reality.

Terrebonne Councilman Red Hornsby has taken interest in the latest amenity proposed for his district. The first-term councilman says he’s on a team that has invited professional skaters to visit the park after its grand opening and partake in a competition. “We’re going to try to put on a big show,” he says.

Although the park’s design is structured to appeal more toward beginning and intermediate skaters, stakeholders contend it will attract skaters from throughout the southeast.

“Skaters, in general, they’re nomadic,” Pulaski says. “They like to try varied terrain and different locations.”

Monty Collins, a 43-year-old skateboarder who operated the indoor park Board Stiff in Houma in the late ‘90’s, agrees.

“If there’s a park in Lafayette, we go to Lafayette,” he says. “We go to Baton Rouge. We go to Hammond. Thibodaux, they’re coming. Whenever I had my park, I had kids from Pensacola who would come to skate.”

In addition to local businesses benefitting from the park, someone will surely benefit from the equipment-retail vacuum amplified by the park’s existence, says Collins, who also owned a skate shop downtown.

If local skaters are staying home and regularly utilizing a free amenity, they’ll need to replace and upgrade boards and bikes and their supporting elements. They’ll need safety gear, bearings and grip tape to stay in form and shoes, shorts and tank tops to showcase their personalities.

Of course, the new facility is also lauded as a location for maturing children to build character.

“Kids that skate are adrenaline junkies,” Collins says. “If a kid doesn’t have that outlet, they’re going to find something to excite them and usually it’s bad things they get involved with. We really, really need this, bad.

“It’s great. It’s awesome. Honestly, it’s too small, because there’s going to be a huge turnout of people.”

A Houma skater does a trick near the downtown courthouse square. The proposed skate park will be open to all extreme-sports athletes, as long as the equipment isn’t motorized.

The preliminary design for Firemen’s Park is pictured. Spohn Ranch, the designer, is in the process of marking up the design to include some opinions submitted by local skaters. Once finalized, construction could begin within two months.