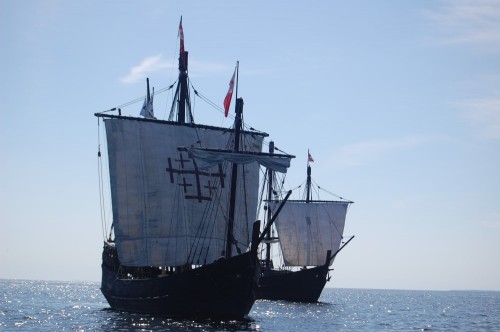 When a meteorologist’s mistaken prognostication hampers the life of everyday people, it usually results in rescheduled golf outings, soggy feet or even a sparse crowd at a local festival.

For Stephen Sanger, who spends the majority of each year living on a ship replicated from Christopher Columbus’ stock, a faulty forecast carries with it much more alarm.

On what was supposed to be a routine trip from British Columbia to a dock in Seattle atop a 2- to 4-foot swell, at the most, turned into an “extremely scary” episode in which the Nina and the Pinta, ships tightly based on the originals that roamed the earth more than 500 years ago, lurched atop a 14-foot swell.

“We had one side of the ship touch the water, and then it came back up,” said Sanger, the first mate aboard the Pinta. “The ships proved to me that they’re actually very sturdy ocean-going vessels.

“If we get the (weather) report, and it says it’s going to be real nasty, then obviously we’re going to hold up and wait. A lot of the times, you know, the weathermen are wrong. … There’s not a whole lot you can do about it once you’re out there unless you can find an inlet to go in. For the most part, you’ve got to rough it out, you know?”

The Nina and the Pinta will dock Feb. 16 at the Downtown Marina on Park Avenue and be open to the public every day from 9 a.m. to 6 p.m. until they leave Feb. 27.

No reservations are necessary, and self-guided tour admission costs $8 for adults, $7 for seniors and $6 for students aged 5-16. There is no charge for children 4 and younger.

Educators and organizations can schedule a 30-minute guided tour with a crewmember. The cost is $4 per person, with a minimum of 15.

“We have the two most accurate replicas of Columbus’ ships ever built,” Sanger said from Dauphin Island, Ala., where crewmembers were conducting routine maintenance. “A lot of the kids get a real kick out of (the Nina). A lot of them think it’s a big pirate ship, but hopefully when they leave they know it’s a little more than that.”

The ships act as “floating museums,” and crewmembers are on hand to answer questions. Memorabilia is available in a gift shop.

Crews travel through the winding waterways of inland America and finish each summer with a loop across the Great Lakes and along the East Coast. This year, the tour starts on the 14th when the ships leave for Houma.

The Columbus Foundation, which owns the ships, was formed in 1986 to raise money to build the three ships Columbus used in his journeys to the New World. After the foundation discovered it didn’t have enough money to build all three ships – The Nina, Pinta, and Santa Maria – stakeholders decided to start with the one they call Columbus’ favorite.

The Nina, with a 65-foot-long deck, was built entirely by hand with naturally shaped timber in Valencia, Brazil.

Just before the 500th Anniversary of Columbus’ discovery, the replica departed Brazil in December 1991 and embarked on a 4,000-mile maiden voyage while taking part in the filming of Ridley Scott’s “1492: Conquest of Paradise.”

The Nina has since docked more than 400 times in the U.S., perpetually “discovering” new ports, including a stint in Houma in 2007. This time, however, the ship will bring a companion.

Construction on the Pinta began in 2005 and the ship has since accompanied the Nina on all travels, doubling as a rentable venue for parties and corporate events while docked. Below the 85-foot-long deck, the Pinta includes an air-conditioned salon and open galley.

The ships can house up to 16 crewmembers, most of whom are volunteers. Sanger, 24, a native of the British Virgin Islands, said he became involved with the Columbus Foundation because his father helped conceive it.

The new-age ships are better suited for their passengers. In the place of livestock that was kept below the deck are a propane stove, 10,000 pounds of ice and a diesel engine.

The crew does man the sails when possible, but the motor’s inclusion is necessary to satisfy maritime laws and travel the river system, in addition to saving time to meet tour dates, Sanger said.

“If we’re solely relying on wind, then it’s pretty much impossible to set dates for where you’re going to be,” Sanger said.

For more information on the ships’ docking, visit the Columbus Foundation website at www.thenina.com or email columfnd@gmail.com. People who wish to schedule guided tours should call 1 (787) 672-2152.

The Nina and the Pinta, replica ships renowned for their
accuracy in depicting the originals sailed by Christopher Columbus
more than 500 years ago dock Feb. 17 at the Downtown Marina in
Houma.