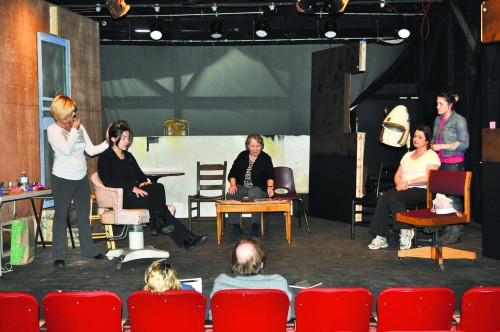 The Bayou Playhouse is a blossoming part of the Cajun heartland. This regional theater, dedicated to Louisiana works, sits near the water across the street from the Bayou Lafourche Folklife and Heritage Museum in downtown Lockport.

The playhouse hosts “Steel Magnolias” this month as this season’s penultimate production.

“A lot of people have seen this classic in some form, but I think this production is going to really knock people’s socks off,” says Perry Martin, who directs the show. “We’re working on so many of the emotions, and getting the comedy out, and trying to make it as realistic as possible.”

There are four major productions in each season. The Playhouse has already presented “Tuna Christmas” and “Waiting Around, The Restaurant Musical.”

“We’re in the middle of our fourth season now,” Martin says. “It is a tribute to Louisiana women.”

“Steel Magnolias” is a comedy-drama with an all-female cast set in northwestern Louisiana. The play focuses on the underlying friendship between the owner of a beauty parlor and her frequent customers as they cope with life’s challenges.

Martin, the playhouse’s artistic director, notes the nearly 5-year-old theater has been his dream for more than 20 years.

“I opened this theater with Karissa Kary and David Guidry in August, 2008,” he recounts. “It’s a theater built from pieces and parts of theaters Hurricane Katrina destroyed.”

Martin explains that originally he planned to open his own theater in New Orleans, but Lockport Mayor Richard Champagne enticed him to look at the building.

“It was a big white empty building,” Martin says. “I fell in love with it and decided that this was where we would open our theater.”

The theater took shape with hard work and a little luck when David Guidry became the theater’s technical director, bringing with him the lighting equipment from the unused True Brew Theatre.

“Right before Katrina, they were going to redo the whole Saenger,” Martin says. “I passed with a friend of mine, and they were throwing the old theater seats on the side of the road.”

Martin and Guidry collected the seats in a 18-wheeler and saved them in storage.

“If you notice, none of the seats are matched numbers because we just grabbed whatever seats we could and threw them in the truck,” Martin says. “When we decided to open the Bayou Playhouse, we had all our pieces.”

The theater was set to open on Aug. 29, 2008, the anniversary of Katrina, with a play about the storm. On Aug. 28, the parish was evacuated for Hurricane Gustav and the theater had to postpone the official opening to Oct. 10. The second show, in December, was also postponed because of the snow storm in New Orleans.

“I’m waiting for a tsunami to hit,” Martin says. “We’re not great with the weather.”

Martin has always been involved with the arts. He began on stage as a ventriloquist at age 4. After studying communications and theater in college, Martin found work as the agent for Mel Blank, voice of Bugs Bunny, in New York. Upon returning to Louisiana, The Thibodaux Playhouse contacted Martin to direct a show about Helen Keller.

“I was at a bar, making time with a lady, and she thought it was ironic that a blind dude was doing a show about Helen Keller,” Martin says. “She happened to be a reporter for the Times Picayune. She wrote a big story, which led to a lot of publicity.”

Martin, who is legally blind, sold out every seat before the first performance.

“Suddenly, people were hiring me to be a director,” Martin says. “I thought ‘Well, I guess I should learn how to do this now.’”

He explains that people always said he would never be able to direct due to his poor eyesight.

“There’s my eyesight, and my vision,” Martin says. “I see colors and shapes.”

Martin considers his eyesight a blessing in regard to emotional scenes.

“If I can see it, it’s easy to make me cry,” Martin says. “If I get goosebumps, or emotion, or laughter without watching, from just feeling it and hearing it, I know we’re there. If not, I know we have to work harder.”

He explains that his background in theater, photography and film has helped him to know what the scene should look like, despite the blurriness he sees.

“I’ve never let it stop me,” Martin says. “Theater is about words and being in the moment. The rest is just making pretty pictures.”

Martin has high hopes for the theater and its future.

“This place is about talented actors wanting to do good work,” he says. “The difference is, this is not a community theater. We use professional actors, locally trained actors, but also actors from all over the country.”

“I love the familiarity between actors in a community theater,” Rowan says. “We get to know each other here, but it’s always before or after rehearsal. During rehearsal, we’re working.”

Pat Hornsby Crochet, Clairee Belcher in the play, said that the area craved a theater like this.

“It brings in people from all over, but also gives great opportunity to local talent,” Crochet said.

Martin explained that although the ticket is more expensive than the typical community theater seat, audience members can expect professional work like they would experience in an off-Broadway New York production.

“In some light, we have all done professional work, but some of us just don’t get paid as often,” Rowan says.

Kathryn Talbot stars as Truvy Jones. Daphne Hernandez as M’lynn Eatenton, Jackie Freeman as Annelle Dupuy and Abby Lake as Ouiser Boudreaux round out the cast.

Martin says the Bayou Playhouse has potential to become a major tourist attraction with the proper support from the local population.

“This is a horrible economic time for theaters but we are proud to say that we’ve finished in the black every year,” he laments. “Not amazingly, but we have paid all our bills for four and a half years.”

“I’ve always felt that the theater is made of the people in it, rather than the space,” Rowan agrees. “The space has lent itself to a certain closeness.”

Martin explains that the scenery is what gives the theater its ultimate charm.

“We have the occasional visit from a gator, bald eagle or raccoon, and that’s just from the audience,” Martin says. “I’m just very excited about the possibilities.”

– Kami Ellender is a freelance writer.

Sara Goodrum gives direction while Perry Martin looks on from a seat thrown away by the Saenger Theatre just before Hurricane Katrina. Martin, who is legally blind, opened the Bayou Playhouse about four and a half years ago and uses its stage to tell Louisiana stories with regional, professional actors.