‘The Addams Family’ helps out LePetit

Vandebilt Catholic High School’s drama team is bringing its take on Broadway’s “The Addams Family” to the Houma theatre for a special fundraising production. The show runs May 28-31.

All proceeds from the show – tickets are $25 – go toward the Le Petit Building Fund.

“We saw the show back in January at Vandebilt and were very impressed with the talented group of students,” Le Petit board member Karen Schilling said. “Our board agreed to invite them to perform the show here.

“It’s such a family-friendly show. The music is fun and the cast does such a great job.”

“The Addams Family” director, Vandy teacher Tami Roche Ledet, said her cast and crew are thrilled with the opportunity to perform at Le Petit.

“This is such a talented group of kids who are very dedicated to performing,” she said. “This is such a fun show, we’ve all had a great time. It’s been wonderful getting to spend time with this group, and we’re excited about getting the opportunity to do this show again.”

Based on the long-running TV comedy, the musical includes all of the Addams: Wednesday, Pugsley, Morticia, Lurch, Grandmama and, of course, Uncle Fester.

The story centers on Wednesday, who is in love with a sweet, smart young man from a respectable family – every Addams family member’s worst nightmare.

Gomez is the first to learn of Lucas Beineke, the love interest. He reluctantly agrees, although he’s never kept a secret from his wife, not to tell Morticia.

Secrets unravel when the Addams’ host a dinner for Wednesday’s “normal” beau and his parents.

After seeing the musical, Ledet wanted to do it with her theater students.

Vandy freshman Madelyn Rodrigue plays Wednesday. She began singing when she was 3, and began attending the South Louisiana School of Arts at 8. She mimicked Shirley Temple and the “Annie” cast as a child.

A fan of the TV show and “Addams Family” movies, Rodrigue has had to temper her bubbly personality.

“It is difficult, but you have to channel your inner Wednesday and put that forward,” she said, noting that she often refers to Christina Ricci’s movie performance of the character.

“[Ricci] had a dead pan face and

showed no emotion, so I try to mimic that,” Rodrigue reflected.

“I was actually auditioning for Lucas (Wednesday’s love interest) because my name is Lucas,” he said. “It was kind of expected that I was going to play Pugsley. There aren’t many guys in theatre, and I am the youngest male cast member.”

Pugsley is struggling with his sister’s maturing.

“At the beginning, he is depressed because Wednesday is growing up and isn’t going to torture him anymore,” he said. “I literally have a solo called, ‘What If.’ He sings about Wednesday never inflicting pain on me anymore.”

Senior Joey Yesso auditioned for the role of Uncle Fester and nailed it.

“I love the character so much that I focused all of my energy on Fester,” he said. “He is that weird uncle we all have.” • 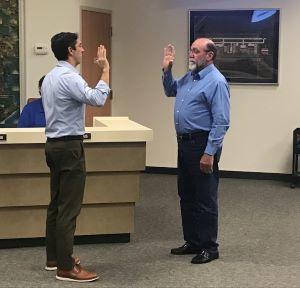