The art of refining festive floats 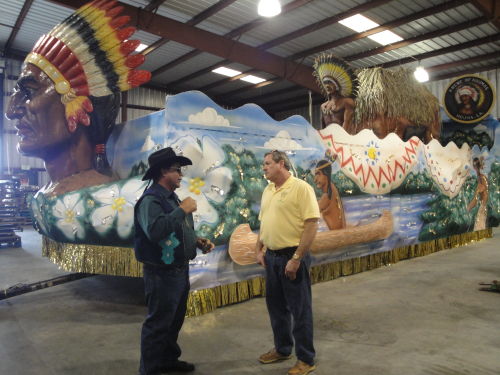 For about 20 years, the same Indian figure has stood tall and proud on the Krewe of Houmas’ Duke’s float. He has weathered the seasons and has finally been treated to a makeover, as has the entire float.

So when the krewe takes to the streets of Houma on Feb. 12, that refurbished Indian figure occupies a new place on the float and a new face will lead the Duke’s float – an imposing Indian bust whose disposition communicates the strength and determination of the Houmas Indians and whose headdress feathers accurately depict the Houmas’ Indians colors.

“We wanted to be as authentic as possible for the Houmas Indians, since the krewe is named after them,” says Neal Shearer, chairman of the krewe’s float reconstruction committee. “It’s our club’s namesake, and we wanted to do it right.”

So in redesigning the float, the committee enlisted the help of Charlie Duthu, a United Houma Nation member who served on the tribal council in the 1970s when the Houma Alliance and the Houma Nation joined to form the United Houma Nation Tribal Council. Along with the company that maintains, repaints and re-props the floats, they incorporated elements of the Indians’ history.

So the enclosure that houses equipment and a restroom has been redesigned into a palmetto hut, a common Houmas Indian dwelling in the past; palmetto fronds are still used by the Houma Indians today in crafts, according to UHN Principal Chief Thomas Dardar Jr. The crest from Houma Nation’s Calling of the Tribes Pow Wow crest covers the rear of the float, and magnolia flowers and Indians paddling three-dimensional canoes grace its sides.

Some liberties have been taken to help people readily identify the features. For instance, Houmas Indians did not wear headdresses because they would catch in the underbrush and dugout canoes shown realistically would simply look like a piece of wood. But Dardar said he is impressed with the krewe’s efforts.

“They went into a lot of detail,” he says. “A lot of thought went into it, recognizing our contribution and respecting our culture. … The crest looks good. My wife smiled ear to ear when she saw it.”

Since the Duke’s float needed a complete overhaul and is the consistent identifying float for the krewe, it spent its entire annual float renovation budget for the makeover, Shearer said, so the usual annual cycle of repainting and re-propping of three or four floats was interrupted.

That schedule of freshening three or four floats in a fleet annually is common among krewes who own their own floats, says John Poiencot of Houma Float Rentals, which not only rents floats but maintains floats for such organizations as the Krewe of Hyacinthians and the Krewe of Titans.

Repainting and re-propping (changing out those figures that grace the front of floats) costs about $3,000 per float, so krewes usually can’t afford to refresh an entire fleet each year. Changing a few floats annually helps keep the fleet fresh for viewing audiences.

“A lot of clubs aren’t particular” about their decorations, Poiencot says, and will keep their same props and floats for five years but still change themes annually. The float decorations tend to stay generic so they can be used with a variety of themes and with various props.

Hyacinthians, which is 62 years old, owns its floats and rents its props annually to illustrate the theme, says Dawn Pierron, club treasurer. “Our float captains and riders are given a costume allowance every year to design and make their own costumes,” she says.

This year’s theme, “Let’s Play,” highlights retro toys, so one float features an Easy Bake Oven prop with the riders dressed as chefs. Another celebrates the Hula Hoop, and its riders are dressed in Hawaiian costumes. Checkers, Play Dough and Crayons are other float themes.

The method of choosing a theme varies between krewes, starting with the krewe president, parade captain or a committee. In Hyacinthians, the president chooses the theme, which is then voted on by the board, Pierron says.

New Orleans’ clubs also have influence on local parades, Poiencot says, since some local clubs have agreements to use previous year’s themes from a New Orleans krewe. For example, Terreanians’ themes follow the Krewe of Caesar in Jefferson Parish, allowing the local krewe to rent costumes and collars for less than they could commission their creation. Planning is reduced along with cost, Poiencot says.

In the Krewe of Houmas, the parade captain chooses the theme, taking into consideration floats’ props, Shearer says. When a float is being redecorated and re-propped, the float captain has flexibility in choosing its elements.

“We’re trying to maintain enough consistency to have decent themes over the years,” he says, while redoing three to four floats annually to keep the fleet “fresh and interesting for viewers.”

Clubs that rent floats, Poiencot says, decide on their themes, then provide a list of desired props to the float rental company, which either has them in stock, rents them from a company in New Orleans or builds them.

A new prop in Houma Float Rentals’ inventory is a jester that was requested by the Krewe of Titans, Poiencot says. A new float has been built and decorated specially for that prop, based on designs the rental company purchases. With constant work, he said, building a new float takes about a month from start to finish.

Homer McGee and John Poiencot of Houma Float Rentals work near the new jester headpiece commissioned by the Krewe of Titans.