The Duke reigns over burgers … and fried stuff 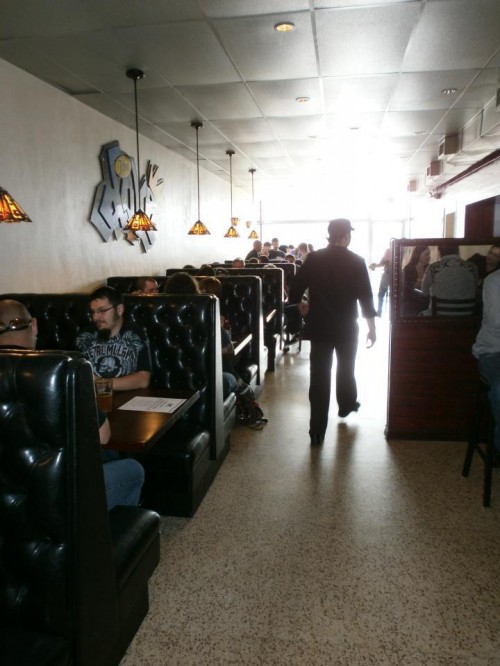 Situated next to The Boxer & The Barrel in Downtown Houma, The Duke elevates casual. Its nondescript glass exterior gives guests no indication of the delicious fun to be had inside. But once you pass through the doors, you’ve entered the fry zone. Settle into one of the leather booths or tables and prepare to be amazed at the lengths the chefs are willing to go to prove virtually anything can be fried for consumption.

Owner Todd Rowan (who also owns the aforementioned downtown tavern) has assembled a unique cast of characters – shout-out to co-chef Paul Lirette, who frequently visited our table to share tales of former fry successes and serenaded us with indie tunes from his post at the grill – to dish up a unique and memorable dining experience.

The Duke opens briefly for lunch and then again for dinner weekdays. Saturdays, it is open for dinner only.

Given its central location, The Duke became an overnight hit with Houma’s downtown club scene. Where else can you get dinner and breakfast on the same sandwich at 1 a.m.? (More on that later.)

Days after our visit, general manager Jim LeBoeuf announced the restaurant is cutting back on its hours. The 2 a.m. closing time has been rolled back to a more reasonable midnight; still reasonable for downtown visitors to partake of a burger, wrap, salad or The Duke creation.

At our server Mike’s suggestion, we ordered a serving of the Fried Mac & Cheese Balls and Fried Pickle Spears ($6 each). Ensconced in a beer batter, the mac & cheese holds its own. The mac & cheese is thick and creamy, but a few bites in it’s clear halving the ball and scooping out the ingredients is the better choice as the breading gets to be a bit much.

That’s not the case with the pickle spears, however. The tart pickle holds its own with the thick batter, coming out victorious. And the flavorful, herby, basil-infused blue ranch dipping sauce perfectly complements this appetizer.

Next up are the entrees.

My guests order The Big Kahuna ($10), a burger drenched in house-made Polynesian sauce and topped with smoked gouda, bacon, grilled red onions and a grilled slice of pineapple, and The Hangover ($12), a burger topped with cheddar, bacon, grits and a fried egg. The Hangover is normally served on a homemade biscuit and served with gravy fries. But there were no biscuits, so the sandwich arrived on a bun, sans the gravy, which probably made it easier to eat.

The Big Kahuna scores big with its tangy and sweet sauce and yummy bacon, even though the gouda gets a little lost in the mix.

The Hangover, meanwhile, straddles the fence between a sober meal and a drunken treat. As a lunch item, the mixture delivered several bites of blended flavor, with the runny egg yolk offering viscosity to the dried, lacking-in-punch grits. My guest also reports the bacon is thick and flavorful, and its crispiness adds another layer to the multi-textured hamburger.

The star in both orders is the burger. The patty itself is well seasoned, perfectly cooked and delicious.

I lunched on a Chili Cheese Dog ($4), a hearty beef hot dog loaded with homemade chili and topped with a sprinkling of cheese. The meaty chili is a meal in itself.

All three come with The Duke’s homemade fries, which are sprinkled with salt and sugar. Perhaps this side dish is better suited for a drunken palate. Surprisingly, the creative combination hits the right mark with The Big Kahuna, my guest reports.

The Duke has a reputation for its fearlessness when it comes to frying. Desserts ($2 average) – Hostess cakes and Little Debbies products, all dipped in beer batter and submerged in the fryer – are listed on a chalkboard near the entrance.

After hearing others speak of the fried Twinkie, we decide to be daring. The batter on a Twinkie takes on a whole new persona. The soft interior and warm cream delight the mouth. And with the batter, is reminiscent of a heavy beignet, especially with the powder sugar atop the dish. All told, the litany of fried offerings are a fun way to fill the stomach, although sober guests would fare better limiting themselves to either an appetizer or a dessert. The beer batter catches up with you fast.

And it is noteworthy that The Duke offers a healthier menu selection, but where’s the fun in that!

There is a lot to like about The Duke. It gets a thumbs-up for its laid-back atmosphere, welcoming staff and fun menu. And don’t get me started on the trivia cards at the table.

The Duke in Downtown Houma is quickly making its mark with its memorable burgers, variety of wraps and affinity for frying just about anything.